An al-Naba’ editorial in a recent issue of the Islamic State’s weekly Arabic newsletter, has given a warning to Africans, ordering that they must be ready to accept the expansion of the jihadist group in their continent.

The warning is mentioned in an interview cited last July on jihadwatch.org, in which one of the leaders of the organization declares: “While we see our core structure in Iraq and Syria under attack, we have been able to expand and have shifted some of our command, media and wealth structure to Africa.”

Africa has for some time been of particular interest to the Islamic State, which in the new order conjectured by Caliph Abu Bakr al-Baghdadi would subdivide its western and northern area into three large regions, whose total land mass would far exceed the ancient presence in the continent of the Ottoman Empire, which was mainly concentrated along the southern coasts of the Mediterranean.

The three provinces (wilayat) in question are Alkinana, Maghreb and Habasha (a term used to refer to specific ethnic groups of Ethiopians and Eritreans, also known as Abyssinians). Alkinana would include Sudan, Chad and Egypt; while Habasha would include Eritrea, Ethiopia, Somalia and Kenya. The third great wilaya, Maghreb, would include four North African states: Tunisia, Morocco, Libya and Algeria; but also Mauritania, Niger and even Nigeria, where the Boko Haram extremists are active.Since March 2015 they have sworn allegiance to the Islamic State.

With this background, ISIS has expanded its sphere of influence in West Africa. At the end of October, the Amaq News Agency of the Caliphate recognized the oath of allegiance of the Islamic State group in the Great Sahara (ISGS).

This group, operating in the Sahel region, is headed by Adnan Walid al-Sahrawi, who in the recent past has been one of the main commanders of al-Mourabitoun (Sentinels). The jihadist organization was founded in August 2013 by the merger of the two elements of the extremist group who have been protagonists of the recent conflict in Mali: These are the  Movement for Unity and Jihad in West Africa (MUJAO), of which al-Sahrawi was spokesperson, and Katiba al-Muthalimin, led by Algerian terrorist Mokhtar Belmokhtar, one of the world’s most wanted men.

In the vision that after the expulsion from the strongholds of Mosul and Raqqa, the Islamic State will next attempt to converge many of its militants in Africa, the recognition of the al-Saharawi’s group is of particular significance, heightened by the fact that it provides the Caliphate with a second reference group in West Africa, after Boko Haram.

It is unclear, however, because after May 14, 2015, when al-Sahrawi swore allegiance to al-Baghdadi, it took over seventeen months before the Islamic State decided to recognize the jihadist leader as one of its representatives in West Africa.

It is also true that the ISGS is an offshoot of al-Morabitun, the group led by Belmoktar, that immediately denied the announcement of submission to the IS by al-Sahrawi, reiterating its proximity to al-Qaeda and thus exposing a split within the group.

On this blog, we have already written about Belmokhtar and al-Mourabitun, highlighting how the group was originally a branch of al-Qaeda in the Islamic Maghreb (AQIM), with which he returned to join at the end of 2015. Both groups have their strongholds in the Northern Mali and together, between the end of 2015 and beginning of 2016, have carried out attacks in Mali, Burkina Faso and Ivory Coast.

It is possible that one reason that led al-Baghdadi’s lieutenants to hesitate for so long before crediting the al-Sahrawi’s group inside the IS was doubts as to its operational capacity, all the more so as in recent months the ISGS has faced the threat of Belmokhtar’s loyalists.

The uncertainties on the offensive capability of jihadist training have been allayed by three attacks in the last two months. In the first two, that took place on the border between Burkina Faso and Mali, three Burkinabe soldiers, a civilian and a customs officer were killed. The last one was perpetrated on 17 October in Niger, where the Islamist fanatics tried to free some jihadists from the maximum-security prison of Koutoukalé, located near the capital Niamey.

In all this, we cannot forget that al Sahrawi was born in 1979 in Laayoune in southern Morocco or rather Western Sahara, where he grew up before crossing the border, bounded by a security wall, and entered Algeria at Tindouf, to enlist in the Saharawi Popular Liberation Army (SPLA), the armed wing of the Polisario Front.

The fact that a former member of the Polisario is the first Sahel terrorist leader to swear allegiance to al-Baghdadi could mean that he will be able to proselytize among young Sahrawi refugees, to provoke an atavistic spirit of revolt against Morocco, that in the last decade has already led hundreds of them to enlist in the many active terrorist groups in the region. 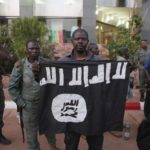