“The decade of economic growth that affected the African continent, seems to have finally begun to have tangible effects on the reduction of the poverty level of the population.” This one of the most important conclusions of the survey entitled “Africa’s growth dividend? Lived poverty drops across much of the continent”, conducted by Afrobarometer, a research institute that studies social trends, political and economic in more than thirty African countries.

New data from the Policy Paper No. 29, edited by the pan-African center of opinion poll are based on interviews conducted between 2014 and 2015 with more than 52,700 people in 35 African countries.

The monitoring indicates that, compared to the previous survey on the 2011/2013, decreased the number of Africans who do not yet have the ability to feed themselves adequately, to have access to clean water, fuel for cooking and to necessary medical treatment, as well as a higher cash income.

The survey results highlights that the perceived poverty tends to decline in countries that have made progress in the development of basic infrastructure.

Specifically, between the first survey of 2011-2013 and that of today, referring to 2014-2015, are 22 of the 33 African countries where poverty has declined, with substantial reduction in Egypt and Cape Verde.

Therefore, we are facing a new trend, which should not leave us grasp by over enthusiasm because, although the continent in general cannot be considered poor, poverty is still a widespread plague. 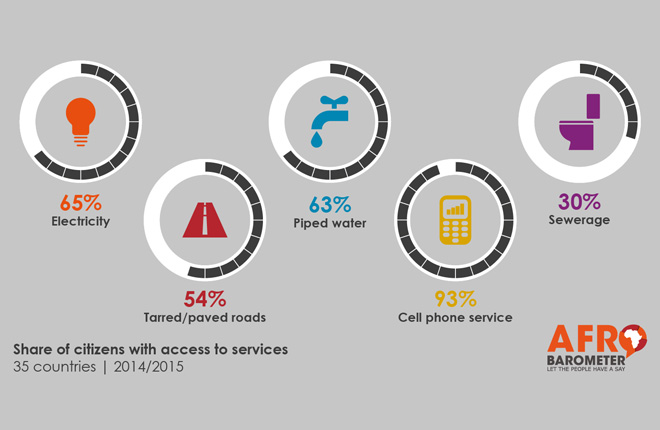 Despite the low levels perceived in some countries, such as Mauritius, Cape Verde, Algeria, Egypt and Tunisia, the report shows that the poverty rate has increased significantly in Mozambique, Benin, Madagascar and Liberia, while has unchanged in five other African countries.

On average, in 2014/15 more than 40% of African people reported being without food and drinking water, at least once or twice in the past year, while 49% remained without medical care, 38% of fuel and 74% without a monetary income.

We can also note the enormous differences that exist between countries, such as Gabon, Togo and Liberia, where there is the highest index of poverty, while the most consistent declines was measured in Mauritius, Cape Verde and Algeria.

In general, states with the highest percentage of poverty are those of Central and Western Africa, while the North Africans are at the top of the list with a minimum level.

Afrobarometer to monitor the spread of poverty in the continent offers the Lived Poverty Index (LPI), an experiential measure that is based on a series of survey questions raised in the consultation, able to determine the concept of poverty in a more comprehensive and different approach from the indices used in other official statistics.

As a contribution to the tracking of poverty in Africa, Afrobarometer uses the Lived Poverty Index (LPI), an experiential measure based on a series of survey questions offering an important complement to official statistics on poverty and development.

An innovative detection method based on the experience of the respondents, openly called to tell their quality of life. Moreover, even if they were not able accurately reporting their current condition, the direct testimony is central in determining the level of poverty.

Indexed to LPI, Mauritius, is the least poverty-stricken country, scores 0.10, among those taken into consideration, while the poorest is Gabon, that has a rating of 1.87, compared with continent’s average of 1.15.

The survey also highlights the glaring differences in access to basic services: while in Liberia, 78% of the population has no medical assistance, at least once in the past year, in Cape Verde it was just 19%.

The best among the 35 countries surveyed, is Mauritius, where a mere 3% went without needed medical care, reflecting the country’s position as one of a very small group of African countries that have invested heavily in health service provision and provide free health-care access to their populations.

The role of governments

All these figures and indicators may be particularly useful to governments and their donor to outline strategies that will help achieve the new objectives of sustainable development.

Although the overall growth of African economies certainly plays a leading role in reducing poverty, the study of Afrobarometer warns that there is no systematic correlation: the crucial factor in improving people’s lives largely depend on national governments and their partners. Both must be able to implement a type of development, which allows people to build a better life.

The demonstration, the report says, it is clear where governments operate relatively simple interventions by investing in secondary and tertiary education, or building roads and other infrastructure development, such as sewerage and electrical networks, people are living substantially better.