More than half of germans are still in favour of the Chancellor, but many believe her long farewell is stifling Berlin’s politics

November the 9th will mark the thirtieth anniversary of the fall of the Berlin Wall. Germany is preparing to face the anniversary in the throes of existential issues regarding its future. Where is the so called Berliner Republic headed? What will happen after Angela Merkel, who on the 1st of August will have led the country for 5000 days, bids farewell? Very few believe that the Chancellor can actually reach the supposed end of her mandate in 2021, while there are those who are prepared to bet that the last Merkel government could be wrapped up by the end of 2019 or the start of 2020. The regional elections in Saxony and Brandenburg on 1st September 2019 provide the tipping point, as could those in Thuringia on October 27.

In recent weeks, the Chancellor has provided further proof of her historic resilience by reminding everyone she still deals the cards on the German political scene. This time, however, Merkel clearly did so with an eye on her succession and within the context of an increasingly weak coalition government. The narrow election of the German Ursula von der Leyen as President of the European Commission was close to being a disaster for Berlin’s Große Koalition: even the German SPD voted against its ally and Merkel had to abstain to preserve her government at home. The Kanzlerin nevertheless managed to exploit the success of her former defence minister in Strasbourg to the hilt by surprisingly appointing Annegret Kramp-Karrenbauer to the post left vacant by von der Leyen.

The heir apparent to Merkel but already facing a consensus crisis, Kramp-Karrenbauer will now have a minister’s budget and a strategic role with which she can hope to bolster her political profile. The inclusion of Kramp-Karrenbauer cannot however paste over the structural frailty of the Merkel IV government. While it may be true that over half of Germans still view the Chancellor favourably, as the country’s discretion over the state of Merkel’s health has shown, the number of those who believe her carefully planned farewell is too drawn out is rising daily. There are those who wonder whether the Kanzlerin and her personal German model of Wu wei, Taoist action-non-action, are now blocking Berlin’s political development, preventing it from addressing the increasingly urgent and interconnected issues with necessary vigour. These issues range from the economy to security, the environment and foreign policy.

In January 2018 a news item was circulating in Germany causing no shortage of satisfaction: due to the ongoing rise in productivity and the high level of exports, the country was short on pallets, the wooden platforms used for shipping goods. Today, one and a half years later, this optimism is on the wane. In July 2019 the economic research Institute IFO in Munich published its new Business Climate Index, which calculates the level of trust in German companies. The index had dropped by 1.8 points compared to the previous month, reaching a level of 95.7%, the lowest value since April 2013. As is second nature to an export economy such as the German one, the growing pessimism of the world of production is linked to external factors, such as the extremely difficult situation created by Brexit and the equally complex developments in the new Trumpian protectionist saga (of which Germany is one of the main targets). After the constant growth and employment boom of recent years, now Germany doesn’t rule out the possibility of a recession. A problem that won’t just affect Berlin, but will also involve various partners of the German production process, which will in all likelihood worsen the dissatisfaction and the tensions within the EU and the eurozone.

A question is doing the rounds among the German Christian Democrats: who would be best suited to face up to such a delicate economic and political situation? Is Annegret Kramp-Karrenbauer really the right person? Or could the main looser Friedrich Merz or the ever sharp Jens Spahn come back into the running? And what kind of majority will the CDU-CSU have to work with, given its inability to stay above 30% in the polls?

The next ally of the Union will certainly not by the SPD, whose pasokification (the crisis of the European left) and identity crisis mean that it is no longer a partner with which one can form a government, and the same goes for the liberals of the FDP, who seem unable to top the 10% mark. The most plausible ally for the new government that the CDU-CSU could be part of are the Greens. The German Grünen party, thanks to the effective double leadership of Annalena Baerbock and Robert Habeck, are enjoying the kind of political and media hype they’ve never experienced before, due to the growing public awareness of the environmental and climate emergency. The German polls have the Greens stable at around 23% and just a few points down on the CDU-CSU. However, if on a local and regional basis the alliances between the CDU and the Greens have been working for some time now, the game will be much more complicated on a national level. On this point particular significance can be attributed to the refusal of the European Green/EFA group (which is German run) to support the Christian Democrat von der Leyen at EU level. The environmentalist agenda no longer scares a large part of the German industrial community, but the Green’s programme is nevertheless radical on aspects such as energy requirements and the need to convert the car industry. At a time when the economy appears to be slowing, a collaboration between the Greens and the Christian Democrats could complicate matters further.

What could really tip the balance are the differences in world outlook between the Greens and the CDU-CSU on key issues such as immigration, multi-culturalism and the dispute on German identity (see under the heading Leitkultur).

For their part, the Greens could try to create a left wing government by joining forces with the SPD and the radical left-leaning Linke, thus bolstering the social profile of its environmentalist prospects. In this case, though, one would have to see how much of their centrist and post-Merkel electorate that has recently moved over to them they’re able to retain.

What at the moment can be completely ruled out is an alliance between the CDU-CSU and the nationalist right wing AfD. This is especially the case given the gradual radicalisation of Alternative für Deutschland, where the nationalist faction appears to have the upper hand. Though on a federal level the AfD is still under 15% in the polls, the next elections in Brandenburg, Saxony and Thuringia seem fated to confirm the incredible hold that the nationalists have over Eastern Germany, where they could soon become the second or even the first party. On the day of the thirtieth anniversary of the fall of the wall, the Berliner Republik could find itself faced with clear evidence of the east-west rift that has never been healed and is becoming increasingly destabilizing. A wound in which Alternative für Deutschland appears to have room for manoeuvre as an almost regionalist territorial representative.

In the future, the national CDU party leadership will therefore also have to work not to allow excessive contact in East Germany between its local sections and those of the AfD. Alternative für Deutschland after all has always been a party built on CDU leavers, both in terms of its leadership and their electoral base. Last year the Merkel government effectively removed the head of internal intelligence at the time, the CDU member Hans Georg Maaßen, owing to his critical positions towards the government regarding the far-right demonstration in Chemnitz in September 2018 (triggered by the killing of a local youngster by two asylum seekers). After being replaced, Maaßen did not leave the CDU, but he has become a dissenting voice that is highly emblematic right now of how a part of the Christian Democratic party share a few of the AfD’s positions, especially over issues such as security and immigration.

In the meantime however, Germany is having to face a completely different security emergency. Last June, in Hesse, a local CDU politician and active supporter of Angela Merkel’s Willkommenspolitik (open arm immigration policies) Walter Lübcke, was murdered. The man arrested for the murder is Stephan Ernst, a man linked to Neo-Nazi organisations. The Lübcke case has put far-right violence back in the spotlight. A specific indication here are the links between the Lübcke murder and the network of the bloodthirsty terrorist group NSU-Nationalsozialistische Untergrund, a formation with a history that exemplifies the danger of underestimating extremist Neo-Nazism in Germany.

The return of the Neo-Nazi peril in Germany carries a very specific weight, because it has taken place within a broader scenario of geopolitical turmoil resulting from the end of the traditional Atlantic order that had stood since the end of the war. After being the champion of globalisation and the free market for years, now Germany is in trouble, faced with the accelerated mutations of the role played by the United States of America in Europe. And while in Berlin there’s a tendency to link the current geopolitical turmoil to Donald Trump’s outrageous behaviour and psychology, one can’t help noting that, in actual fact, increasingly crucial issues such as the German contribution to NATO or the creation of an independent European defence force go well beyond the exceptional nature of the current USA presidency. By the same token, it’s certainly not just due to Trump that Berlin finds itself increasingly hamstrung by Washington’s about-faces, Moscow’s attempts at revival and Beijing’s Eurasian projects.

Last July, when a British tanker was held up in the Strait of Hormuz, the USA formally asked Berlin to take part in a naval mission in the area. The German answer was vague, and clearly influenced by the differences between the EU and the US on the Iran dossier. But while on the one hand Germany’s intention of safeguarding the de-escalation policy with Tehran seemed perfectly legitimate, on the other the German response involving a European mission was presented in a muddled way and not as a real and effective alternative. One thing is certain: the safety of the sea routes is an issue that an economy as heavily reliant on exports like the German one will not be able to ignore for too long. What is termed globalisation is, after all, firstly and foremostly a world network of marine trade routes that can be travelled in safety. If this network starts to collapse, the German (and European) economy will soon feel the pinch.

On a broader level, the Germany of the future will find it harder to stand as a moral and multi-lateral power without offering more pragmatic and coherent positions. The perfect test bed here is the doubling of the North Stream gas pipeline, on which Berlin has so far merely adopted a national realpolitik, without ever deciding to face a strategic confrontation within the EU on the geopolitical consequences of the infrastructure.

The intensity of the coming years will require clearer choices by the next German governments and it seems obvious that Germany will only be able to make them within a European Union that is capable of being a player rather than a pawn in the hands of the world’s multi-polar superpowers. In the next years it’s very likely that no country more than Germany will be in need of a strong and independent European Union. For the Berliner Republik, there is no certainty of a democratic future outside the EU. 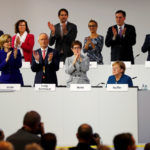 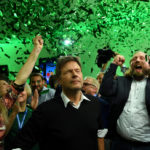