Algiers in the shadow of a Chinese minaret

Ten thousand Chinese will build a gigantic mosque in the Algerian capital. 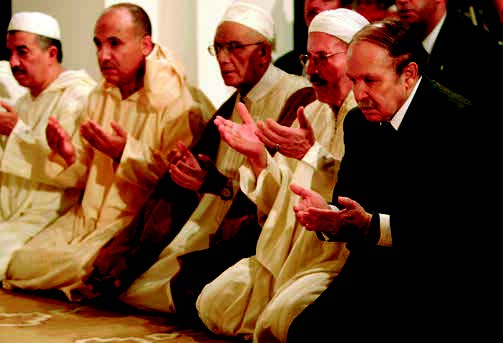 “It would take Algerians a century”, Ahmed says sadly. The Chinese instead have promised to build the world’s third largest mosque (after Mecca and Medina) in the suburbs of Algiers in just three years. It’s a colossal project.

The construction site of the Djamaâ El Djazaïr mosque covers over 20 hectares. Upon completion, in 2015, its prayer hall will accommodate 37,000 worshippers and it will be topped by a 265-metre high minaret, the tallest in the world. At present, the cost is estimated to be just over €1 billion.

Ironically, this huge public investment will have a limited impact on employment in Algeria. Despite the high rate of unemployment (approximately 10% at the end of 2013, according to official estimates, but in all likelihood around 15%), construction will be carried out for the most part by a foreign workforce. Approximately 10,000 Chinese labourers have been housed in spartan yet functional apartment blocks adjacent to the construction site.

The China State Construction Engineering Corporation (CSCEC), the group that was awarded the contract, sent for labourers from their own country. On balance, they cost so much less than Algerians that the Chinese bid was considerably lower than one made by a Spanish-Algerian consortium, which would have used local labour. “Algerian firms don’t pay, and Algerians work less”, says Ahmed by way of explanation, reiterating an view held by many in these parts.

Another opinion shared by many, however, is that the authorities had other reasons for choosing the Chinese. The CSCEC is on the World Bank’s blacklist of companies ineligible to secure contracts from the Bank due to sanctions imposed against it for fraud or corruption, which only raises more doubts. “Corruption is an issue often raised in bilateral meetings between the European Union and Algeria”, a European diplomat explains.

Transparency International puts Algeria in 94th place on the worldwide Corruption Perceptions Index. Often in developing countries, the abundance of energy resources can actually be a handicap. Oil and gas ensure huge profits for the country, which are not always put to best use. Public subsidies and controlled prices keep the people pacified and as it turns out Algeria was only grazed by the Arab Spring in 2011. It’s a fragile calm though, and discontent is rife.

“The Algerian economy is a rentier economy. We sell oil and buy food. But it won’t be sustainable in the long term”, explains Algerian journalist and writer Lakhdar Ferrat. For years, the European Commission has been raising alerts over Algeria’s over-reliance on hydrocarbons.

“We encourage economic reforms that are able to free the potential of the Algerian economy and support diversification”, according to a spokesperson for the High Representative of the Union for Foreign Affairs for the European Union, Catherine Ashton. But the dialogue has often fallen on deaf ears. The Association Agreement between the EU and Algeria, which should in fact govern bilateral relations, remains a dead letter. The economic strength of Algeria, which boasts one of the lowest public debts in the world, weakens the European Union’s ability to apply pressure in favour of reform. The riches are nevertheless only available to a few in a country where more than one-fifth of the population still lives below the poverty threshold. Algeria’s contradictions are not only economic but also social and political, as proven by the candidacy for a fourth term in office in this April’s elections by 77-year-old President Abdelaziz Bouteflika, who has not spoken in public since his stroke last year. The secular image Algerian authorities try and project, however, is countered by a tendency towards restricting personal liberties, which is common to many Muslim countries. Algerian Islamists have lost prestige and political appeal by entering into previous governments with Bouteflika. Yet truly conservative Islamism still remains strong in people’s habits. Veils and burkas are widespread even in the most fashionable neighbourhoods of Algiers, where the French once lived.

The United States is often seen as an easy scapegoat for a country’s woes. Is religious extremism a threat? “No, that’s merely an American invention to weaken Islam”, says Said, a café owner in Algiers. And yet, as you walk around the Bal el Oued district, in the city centre, the most radical side of Islam is not merely a perception, but a strong presence of long beards and stern gazes. In the 1990s, Bab el Oued was the stronghold of the Islamic Salvation Front (FIS), the lead force in the brutal civil war that, in some ways, represents the model of conflicts underway in many Arab countries today. “People still aren’t accustomed to seeing foreigners. There’s no tourism because the authorities haven’t wanted to develop it”, explains Ferrat, who was forced to leave the country 20 years ago due to Islamist threats. Today, however, he believes that Algeria’s main problem is corruption and not Muslim extremism. “But economic malaise always encourages radicalism”, he warns.

In these conditions, the enormous mosque is a symbol of the country’s woes: a magnificent building erected to Bouteflika’s glory that conceals the frustration and hardship of much of Algeria’s population. Just like the elegant colonial buildings in the centre of Algiers, built in the Parisian style of George Haussmann, with their white, frescoed facades, and often dilapidated interiors, it is an image of power distant from the needs of the people.