But the Empire is no longer

British Prime Minister Boris Johnson with the American president Donald Trump in Biarritz. Stefan Rousseau/Pool via REUTERS Outside the EU, the United Kingdom will have to find a new role, new partners and ways of meeting global challenges. Yet imperialist ambitions remain

The return of the Anglo-sphere. How often have we heard these words since Leave’s victory in the June 2016 Brexit referendum, followed, a few months later, by Donald Trump’s successful bid for the White House. But what has been promoted by Brexiteers as a grand project for a future neo-imperialist United Kingdom, which, unfettered by European constraints, will once again become a great world power (or so the story goes) risks coming unstuck against harsh reality. A reality which tells us that the United Kingdom since WWII has become a medium sized power, partly thanks to the United States, which today, instead of a new British Empire, would probably prefer the United Kingdom to become the fifty first state of its federation. This is clearly a provocation but given the problems involved in ironing out its future relationship with the European Union, London may have no other alternative than to knock on Washington’s door cap in hand.

So what is the Anglo-Sphere. It is a geopolitical construct based on the English language, a good example being the Five Eyes intelligence sharing community. The members of this community are the United States, the United Kingdom and the British nations of the White Commonwealth – Australia, New Zealand and Canada. These countries share an Anglo Saxon and protestant culture. London sees itself once again within the AngloSphere, but with Brexit it risks losing the precious strategic role entrusted to it by Washington after the Second World War as the United States’ outpost on the Old Continent.

The AngloSphere was initially an important communication tool for Brexiteers, a starting point for a new British imperialism. Because in the end, as has become obvious during two and a half years of negotiations, Brexit is more of a British issue than a European one. Or more precisely, English. It’s a revolt of the country against the centre, against London, a city which, with more inhabitants than Scotland and Northern Ireland put together and worth one third of the UK’s Gross Domestic Product, has lost contact with its English roots. London thinks of finance, the rest of the country dreams of power.

The rediscovery of the empire via its colonies and the new ambitious programmes for the Navy (particularly in the Pacific, where the United States and China are battling it out), stems from a need that is completely encompassed within a major project headed by the British Conservative party: saving the United Kingdom through Brexit. Discussions on the nature of the United Kingdom’s relationship with the European Union have been tearing the British right wing apart for thirty years. No one in the United Kingdom is pro-European as we understand it on this side of the Channel. But there are those who are more or less Euro-sceptic. So, the feud that first started with Margaret Thatcher and John Major raged on until David Cameron and Boris Johnson went head to head separated briefly by the inconclusive interim rule of Theresa May. And it probably won’t stop here. Because Brexit for David Cameron was supposed to be a way to be rid of the most extremist elements of his party. But the former prime minister lost his gambit.

What’s more, promising the empire is supposed to be conducive to another mission that the Conservative party has set itself: reviving the unity of the Realm faced with regionalist sentiments, often fuelled by the European Union, that came to a head with the Scottish referendum in 2014. As Fintan O’Toole, one of the most respected Irish opinion leaders explained on eastwest a few months ago, these centripetal forces have always been constrained by the Empire which turned  Britishness into an “extremely powerful construction” based on three pillars – British exceptionalism, the industrial revolution and the protestant religion – which were however “flattened after the war, with the only exception of the Falklands war, which was the last imperialist adventure that attempted to symbolically reassert a lost role.”

In order to unite the country – as well as settling old scores and covering up political failures – and therefore stand once more as a medium sized power, a dimension that even London accepted after the Suez debacle in 1956, an outside enemy was needed: the European Union was the perfect foil for such a purpose. And providing a grand international vision is also meant help to reunite a country which, after the collapse of the three aforementioned pillars, is now suffering from an identity crisis that is incompatible with the existence of a national conscience. There’s nothing wrong in this, as O’Toole explained, so long as it doesn’t lead to extremism. “Nationalism, if it can no longer be imperialist, ends up being anti-imperialist, and therefore needs to identify an oppressor”, the Irish Times columnist explains. “This is where the propaganda mechanism used by certain politicians and media comes into play: pointing the finger at Europe and assigning it all the blame. This is a gambit which, as we have seen, has got out of hand and has become toxic for the entire country.”

Thus in this entirely British fabrication, or, more accurately, English fabrication, we have an enemy, an invader, that aims to land on the southern English coast, conquer the Kingdom and impose its own bureaucracy: the European Union, perceived as a regime akin to Nazism according to a considerable cross-section of public opinion and British intellectuals. So pro-Europeans for Brexiteers are Remoaners, meaning Remainers who moan. While the idea of the empire has been vanquished geopolitically for over half a century, the belief in British exceptionalism still persists and can be achieved through Brexit, along a new axis, that includes the United States and the former British nations and cuts off Europe.

But the idea of the empire clashes with reality and with the goals of its long-time ally the United States, which certainly means to change the European Union and its French-German axis, but is not so sure that it wants to lose its bridgehead. There’s also the matter of the free trade agreement with the United States after Brexit. The Republican and Trumpian world says it can happen anytime. However, before promising any kind of agreement, the US democratic enclave wants to see how the problematic border issue between the Republic of Ireland and Northern Ireland will be solved, seeing as the Irish represent an influential segment of the American left leaning electorate.

A political fantasy suggests that Britain, if the United Kingdom decided to become part of the federation, would be the most highly populated state in the United States: with its approximately 56 million inhabitants it would top California by 16 million. But the United Kingdom would be the fiftieth state out of 51 in terms of gross average earnings, topping only Mississippi.

As we indicated, this is nothing but a fantasy. But without the European Union the United Kingdom needs a new partner, for both trading purposes and in order to face the major global challenges. London is looking to Washington, but perhaps in the City the belief in one’s exceptionality could be blinding: it appears that British politics lacks the awareness that the imperial age is over and that the United Kingdom will no longer have the kind of gravitas on the international stage that it boasted before the Cold War and nationalisms have now spread all over, to the extent that it will be difficult to build an AngloSphere based exclusively on a shared idiom.

Seeing as the United Kingdom will not become the fifty first state under the star spangled banner, British politics will have to use these Brexit transition years to avoid the country becoming a colony of a former colony. Mention has often been made of the Swiss model as an example of the possible future relationship between the United Kingdom and the EU. But this example could even provide British politicians with different indications: “acting like Switzerland”, both diplomatically and financially, in the trade and technological war between the United States and China, thanks to its good relations with the first and the overtures made to the second which began with Cameron. This could provide London with a new centrality on the international stage. On condition of abandoning all imperialist ambitions which have had their day. 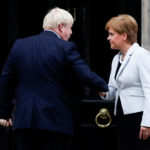 The end of the United Kingdom 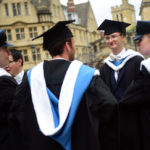