Belarus seems a nation stuck in the Soviet era. Journalists and activists are censored, expelled, arrested and beaten – but all in perfect harmony in this well-oiled tyranny. 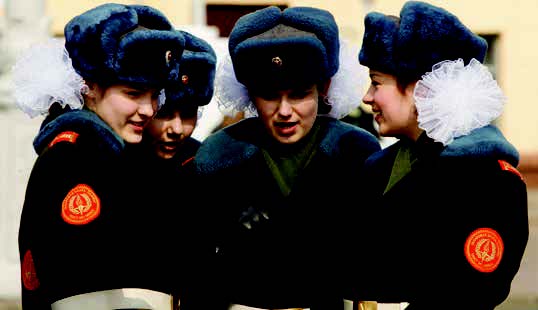 At first sight, the Republic of Belarus gives the impression of being a cross between Poland and Russia 15 years ago. Truth is, it’s been frozen in the Soviet Futurism of the 1920s. The metro stations were designed from sketches for the film Metropolis, the rest of the urban architecture is a concrete copy of Le Corbusier. The capital, Minsk, is imposing but its grandeur almost funereal; the tombstone marble on the building façades and the carnations on sale at the flower kiosks are perhaps to blame. More than a Utopia, Dranikiland (as Vladimir Tsesler calls it) is a country without entropy, where everything remains unchanged over the decades. There are statues of Felix Dzerzhinsky in the parks and the secret services still go by the name of KGB. Like the Japanese soldiers lost in the jungle, still fighting the war 30 years on, the people of Belarus have towed the line, even though history took a U-turn and their general backed down. Belarus is under a kitsch dictatorship that’s just like President Alexander Lukashenko’s comb over hairdo: a clumsy attempt to show off something one is not or does not have. But the regime’s aesthetic, a provincial version of USSR taste, makes the pearls of independent culture shine all the brighter.

One of the places where the Belarus rainbow begins is the Y Gallery, the pulsating heart of Minsk’s cultural life. It is the home of artists such as Ruslan Vashkevich, Sergey Shabohin and Mikhail Hulin, as well as the best of the country’s writers, often seen in the Logvinov publishing house next door. The name of the only independent art magazine is also an ideological manifesto: pARTisan. But very few people in Belarus view art as a social vanguard or see the cultural battle as an outpost of the political struggle. Aleksandr Zimenko has inside knowledge of the dynamics in the Ministry of Culture. He explains that the government is afraid of contemporary art because it doesn’t understand it. Out of fear that any metaphors against the ruling powers might slip out, it prefers to throw the baby out with the bathwater. Criticising the president is not freedom of expression in these parts, it’s mockery of the motherland, and very severely punished.

Apart from this, the main problems for artists are economic: the paying public is limited and private sponsors are few, seeing as 80% of the economy is state-run. The old liberal adage in Belarus is turned on its head: all that is not expressly permitted by law is forbidden. Unless you find a way into the magic circle of some ministry, by repeatedly and publicly endorsing the regime, the economic and bureaucratic obstacles make it impossible for a show to become business. In theatre it’s worse. Choosing what you stage means giving up not only all state support, but private funding as well. And politically critical theatre is an entirely different ball game again.

The directors of the Free Theatre, in exile in London, direct their actors via webcam. Their performances in a run down house on the outskirts of Minsk are monitored by the police, who check and document the identity of the spectators. For writer Pavel Kostyukevich, the country’s chaotic ideological state following de-Russification, post-colonialism and the advent of global capitalism is enthralling for artists and authors alike. Even though the country ranks 154th out of 177 for economic freedom, if you launch an innovative project there’s every chance you’ll be successful being the only one on the market, and because the country is growing at a speed the eurozone would die for. Belarusian youngsters are much more relaxed than their Italian counterparts, thanks to a 99.4% employment rate despite the economic sanctions imposed on the country by the EU-US bloc. The information technology industry is particularly developed. The low cost of engineers has led international firms such as Google, Siemens, Mercedes- Benz and Samsung to hire Belarusian programmers. Applications and games like Viber and World of Tanks are ‘Made in Belarus’ flagships. The Belarusian economy is flourishing, despite its obvious contradictions. Who knows what Lenin would think of the enormous McDonalds that overlooks the street bearing his name? And who knows if there isn’t a third way forward, something between the current state monopoly and the feared sell-off of the national industrial wealth to Russian oligarchs.

Artur Klinau, one of the country’s main editors and artists, believes Dostoyevsky must have mixed with Belarusians in St. Petersburg, because no one has described their character, discretion, cynicism and disenchantment better. These are precisely the traits needed to survive under a stubbornly anachronistic regime, and Belarusians is now set up to become one of the possible avant-gardes of a new millennium devoid of all ideologies.