It is raining and it is very cold outside and the invisible people, the homeless are in the streets all the nights and days long, not only at Christmas time, but everyday of the year. Also in Belgium, that is well known for its cold weather, it is possible to see, next to rich and wealthy people, many poor people looking for a warm refuge. Walking around in Gent, in the Flanders, it is not difficult to see something unusual: a fridge in the middle of the street. 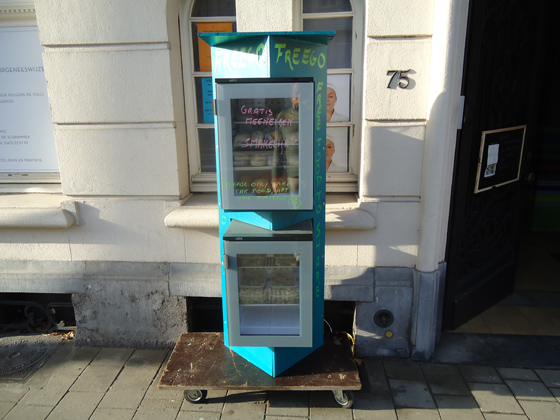 Soups and food are inside of the fridge with a particular notice “Freego”, free to go. Is it a fridge for free? Somebody asks. Not really. It is a fridge especially dedicated to homeless and students, from where they can have, for free, a fresh dish of the day prepared and left there for them. This idea comes just after the development of the “cafè suspendu” , “il caffè sospeso”, that it is a tradition in Naples, where coffee is often paid and offered to the following client in the bars, an habit that Belgium has now inherited. In restaurants, bars, cafes and fried chips shops buying your purchase you can choose to pay and offer a soup , a portion of fried chips, a sandwich or a coffee to people who cannot afford it. In exchange the person will receive a ticket to give to an homeless in the street who will have the right to receive the soup or the drink “in sospeso”.

“Freego” in Gent a fridge for homeless

«Even the homeless should eat well and eat healthy food. The students should understand the importance to healthy eating» pursuing this mission Stef Mintiens, doctor in natural medicines, launched Freego. The fridge is just in front of his home, in Albertlaan street in Gent. A fresh dish or soup is available for homeless and students everyday between 11 a.m. and 9 p.m. . The food is homemade from Mintiens and volunteers, but also left from restaurants. Hearing the story of a similar fridge in South Arab, the Belgian doctor decided to try the experiment with Freego in his home Country.

«Until now I was going to distribute food to the homeless every Saturday» says Mintiens «Now I can do that every day and we left even the pizza today ». And the results are incredible: 500 litres of soup in a week, 2000 portions in a month.

Key to the success of these practises is anonymity. As homeless do not have to declare their identity, nor the donors. Usually it takes less than half an hour for the fridge to be empty.

Mintiens obtained the fridges from a hotel that renovated its facilities. Other fridges are still available and waiting for other volunteers at its home.

«People should not think about homeless only at Christmas time and forget about them the 2 nd of January» says Mintiens. Indeed, he explains that once cooking for the family, it is not a big deal to prepare some more food for others who may be in need.

It is not difficult to find bars and restaurants partners of the cafè suspendu in Brussels and in Belgian towns as well. All the practical info can be found on a facebook page. Nowadays many other social activities raised up in Belgium. An hairdresser for homeless on a Sunday. There are distributions of free soups in the squares supported from food chains and restaurants. The goal of these activities is to increase people’s awareness and to promote solidarity. Over a year ago the supporters of cafè suspendu launched the idea of street fridge for homeless too. They are trying to engage big food chains such as Carrefour and Delhaize. This partnership would help to fight the food waste in supermarkets. Less than one fourth of food that goes to waste in EU alone could save 805 million people suffering from the hunger in the world.