So Italy’s failure to qualify for the World Cup could be a blessing in disguise.
redazione 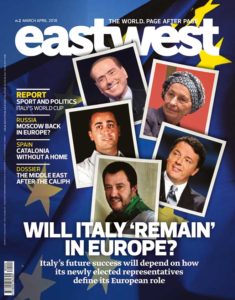 FRONT PAGE – The whys of a choice

France’s Emmanuel Macron has already made history in the process of constructing the European Union. He had the courage (if not the cheek) to conduct his electoral campaign by promoting the United States of Europe and marking his symbolic and thrilling victory stroll to the notes of Beethoven’s “Ode to Joy”. Doing so with an approach that even his own collaborators had no qualms deﬁning as “Bonapartist”, hardly a federalist label, actually reinforced his intent. Eastwest was ﬁrst set up 14 years ago under the umbrella of the banking group UniCredit that at the time was busy building its own European proﬁle and therefore thought it advisable to promote a debate focused on Europe. They entrusted me with its management, thanks to the active rather than staid approach to Europe I’d learned from former Foreign Minister Renato Ruggiero. Now the bank has taken a step back, leaving us more independent, stronger and with a reputation and credibility that enables us to continue promoting the idea of a federal Europe (in which we still ﬁrmly believe) within the international arena. UniCredit is also no longer part of my own life. I’ve decided to dedicate myself full-time to the construction of a research, publishing and training hub, the Eastwest European Institute, that aims to compete with the major American companies in this sector. While I was busy reprogramming my professional endeavours, Emma Bonino (who many will remember for her struggles for human and other rights as well as her commendably brave stint as a European commissioner) abruptly asked me to invest my “bourgeois reputation” in a risky yet noble project: building a pro-European movement that might accelerate Italy’s progress towards the institutionalisation of a United States of Europe by communicating to the Italian people that Europe is not only useful but essential to our idea of a progressive and supportive society. I have to admit that I am emotionally invested in making this case. At the end of the 1960s, my father, Francesco, entered the political fray with a project in mind. He wanted to shift the economy of the region where he was born (the southern reaches of the province of Naples) by replacing small, local industrial and commercial enterprises with development based primarily on tourism. His campaign was not just about economics. It also entailed a social and cultural change that meant opening up to the world the archaeological and landscape treasures around Mount Vesuvius. I was a spectator to this eﬀort, observing and understanding its successes and failures. Now 40 years on, I feel the time has come to take the experience and qualiﬁcations I have acquired in my professional and social life representing my country (as best I could) and employ them in the service of the region where I was born. Plenty of men and women from southern Italy can boast the kind of skills required to build new models of eﬃciency and success that exploit the best of the past while simultaneously being prepared to face the challenges of the future with courage and enthusiasm. Crucial challenges lie ahead. Our country is doing its best to put the crises behind it; some good things have been achieved, but France and Germany are still the main players and seem better prepared than we to forge the path ahead. If we can’t rely on a more competent and stronger government, Italy could miss another chance to carry more clout, both in Europe and worldwide. To keep reading, purchase the pdf file of this issue To subscribe to the magazine please access our subscription page here
redazione