Chinese investments in Russia are replacing those from Europe. 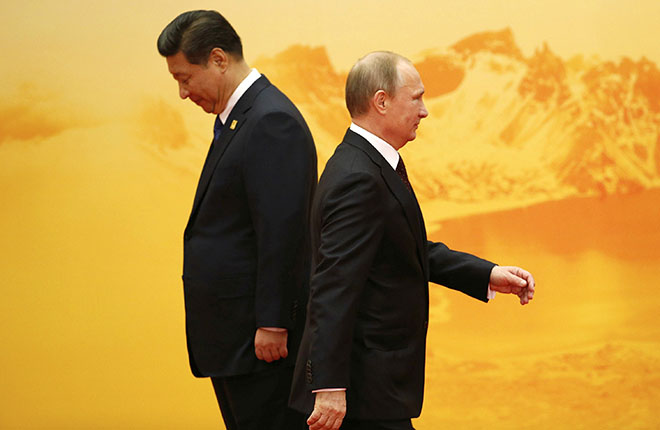 A lthough Russia may be starting to see the effects of the US and European sanctions, it does has a significant crutch: China. Relations between Beijing and Moscow are in fact strengthening. Chinese banks are opening branches in and around Moscow, Russia is selling millions of cubic metres of natural gas to China and direct investment from Beijing has never been greater. The outcome is distressing for Brussels and Washington because it means that the economic sanctions are being circumvented from various directions.

One year ago, Kiev was fighting for admission to the European Union. The protests on the streets spiralled to a point where the EU and the US were forced to intervene diplomatically. The escalation of the Ukrainian crisis led to a secession referendum in Crimea over whether or not the region should break away from Ukraine to become part of Russia. It also brought the first rounds of sanctions against Moscow Implemented cautiously at first by Brussels, in the hope of not interfering too much with the trade agreements between Russia and the European Union, they are now being enforced with greater intent. The sanctions are aimed at the entourage of Russian Federation President Vladimir Putin and the leading members of the Duma, the country’s parliament. The United States also used an iron fist in attempting to resolve the Ukrainian crisis, which appeared out of control. A closer look would seem to indicate the situation hasn’t changed.

The impact of the economic sanctions against Russia was significant, but alleged developments, if confirmed, could end up thwarting the measures, rendering them basically ineffective. According to the data of the Central Bank of Russia, China is replacing the EU as the country’s leading foreign direct investor. In the first quarter of this year (the latest period for which data is available), foreign direct investment from the EU totalled just over €2.3 billion, nearly €1.6 billion of which came from the eurozone. This is essentially a 63% decrease in annual investment and is the result of sanctions-related restrictions.

Making up for the loss was foreign direct investment from Asia, which increased by 560% on an annual basis in the first three months of 2014 to approximately $1.2 billion (€960M). The biggest slice of that pie – $1 billion (or €797M) – came from China. In addition, Beijing signed a hefty $400 billion (€323M) gas supply deal with Moscow, and relations between the two nations are being further cemented. On 10 November, on the eve of US President Barack Obama’s visit to Beijing, the president of the Russian Federation and Chinese President Xi Jinping signed another round of energy agreements. Among these, Russia’s leading producers of natural gas, Rosneft, sold a 10% stake of its Siberian oil field to the China National Petroleum Corporation just as Gazprom was negotiating the above gas-supply accord that will see roughly 30 billion cubic metres of natural gas piped into China from Western Siberia over 30 years.

The objective is to create channels parallel to the European natural gas supply agreements. Gazprom called this “the first of many deals that are predicted to significantly increase Russian exports.” In other words, they are a legal way of bypassing the European and US sanctions. “We are looking out for our national interests. We must take into account that we’re heading into autumn,” commented President Xi, in an attempt to quash the assumptions of critics who posit that political interests lie behind China’s decision to use Russian natural gas. He didn’t fool anyone. Nevertheless, China’s interest in strengthening business relations with Russia extends well beyond gas. Analyses of the data from the Central Bank of Russia show that Chinese banks are backing Russian banks. In particular, loans from Chinese credit institutions to the Russian private sector (nonfinancial companies and families) reached $13 billion (€10.5bn) in just the first quarter of 2014. This is nearly twice the entire amount – of $7.5 billion (or €6bn) – advanced in 2013, and the figures are certain to increase. According to a report released in September by the Anglo-Asian bank HSBC, “Chinese banks are opening more and more branches in Russia, thus providing those being sanctioned with the same level of credit they had before the EU and US crackdown.” It isn’t clear just how many new bank branches there are overall in the Russian Federation, but HSBC claims that by the end of this year, the number could rise by 12%.

The deals between Beijing and Moscow don’t stop there, according to the Japanese bank Nomura. In a long report on Russia, they calculated that Russian natural gas could meet 17% of China’s needs by 2020, once the pipeline is in full operation. In absolute terms, as of 2020, Russia will satisfy 10% of China’s entire energy requirements, compared to the current 6%, according to the National Development and Reform Commission (NDRC), the Chinese agency that administrates and plans the country’s economy. The aforementioned 38 billion-plus cubic metres of Russian natural gas that China will import over the course of 30 years will begin arriving in 2018. Besides natural gas, Russia could soon grant China commercial and other construction permits within its boundaries, as Russian diplomatic sources explain. If that happens, the increase in foreign direct investment could be even greater than what flowed into the country in the first quarter of this year.

While it’s true that three months is not enough time to confirm whether or not what we are witnessing is simply a trend, it’s also true that existent deals, and others already in the negotiating phase, cannot be underestimated. They alone are proof enough that both Brussels and Washington should begin to fear the Moscow-Beijing team.