Cold War – Part Two: Top 5 reasons why it might soon make sense to talk about it

Obama has compared Russia to Ebola and the Isis as global challenges, while Kerry has asked NATO countries to increase the military budget to face the threat coming from East. The Iron Curtain has fallen and is not likely to rise again, but the words used would suggest it eventually could. 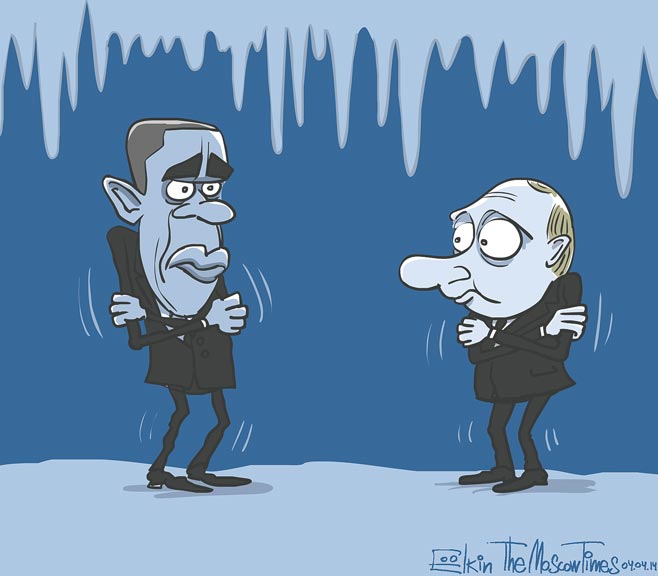 The reasons why it makes no sense today to talk about a new Cold War is a mantra among analysts at least as far as we journalists like the cliché. The arguments experts use to repeat, which I have summarized in the five reasons in the first part of this post, are definitely more reasonable thanthe comparison with the Iron Curtain and really help to understand the current relations between Putin’s Russia and the West. However,we can do some considerations. Firstly, who brings a new Cold War up, is often recalling the Russian attitude toward Western partners. But what exactly is the West attitude towards Russia? And more, the five reasons take a snapshot of international relations that, like any photograph, might not capture some aspects in the making. If today’s Russia is not yesterday’s Ussr, what tomorrow will be like? Let’s try to revise the five reasons from another perspective.

1. It is true that Russia is nowadays a regional power, not a global superpower as the USSR at the time of the Cold War. Nevertheless, it is also true that it is a rising power. If Moscow is not able to challenge the American hegemony (though declining), is surely capable of making its leadership worry. How could be otherwise explained the recent words of Obama who has put Russia on the same level of Isis and Ebola as world threat? If it is not (yet) a global power, why the United States feel threatened?

2. The ideological conflict that divided the world into two blocs died with the twentieth century. Putin’s Russia is not bearer of any ideological alternative to Western-style democracy based on free market. Still, even without takingPutinismas an ideology, something is changingif compared to the post-Soviet years. The vacuumthe death of Marxism-Leninism left in the 90s is not so empty. The patriotic rhetoric, the call for so-called traditional values, the pervasive presence of the Orthodox Church, the recovery of the great achievements of Soviet era are not aspects unrelated to each other. The incomprehension syndrome that has always afflicted every Russian is not feeding an inferiority complex anymore and, thanks to a new national pride, is the basis for a sort of “Russian exceptionalism” as opposed to the American one. It is like Russia – with its guided democracy, with its attitudes towards homosexuals in favor of the traditional family, with the restriction of individual freedoms in exchange for security and higher wages and with the rejection of the secularism of the most developed countries – is indicating an alternative way of democracy.

3. The Russian revanchism is limited to a regional scale. Yet the war in South Ossetia in 2008 and the annexation of Crimea in 2014 had an impact far beyond the regional scale. NATO, which seemed to have lost its raison d’etre with the end of the Cold War and the dissolution of the Warsaw Pact, has now new fuel. The member countries, which are supposed not to feel threatened by Russia, call for NATO greater power. Seven members led by UKbuilt up a rapid reaction force amidst the war in Ukraine, while the American Secretary of State, John Kerry, has prompted the NATO partners to increase military budget, calling the situation in Ukraine a “wake-up call.” But who NATO’s number one enemy?

4. The Russian budget relies on energetic supply to the West. This situation, however, is very similar to that of the USSR, at least from the years 60-70, when oil and gas were sold in exchange of hard currency that made the Soviet economy go on. Russia’ risks related to a crude oil price fall is similar to the one that, according to some analysts, caused the collapse of the USSR. However, the Soviet dependence on the foreign cash has not prevented the Cold War last until the days of perestroika. Why should it do it today?

5. The international isolation that characterized the Soviet Union would result in serious harm to Russia. But to say that the world of 2014 is not that of the Seventies is equal to say that it is no longer divided into two compact blocks. A multipolar world means many layouts arepossible for a big player like Russia. None of the Brics is a member of NATO and, at best, only a tepid ally of the United States. The recent agreement for the sale of gas to China, which is certainly not aneager partner of Russia, is emblematic. Moreover, who says that a shift towards Asia means isolation?