Air travel is going through a historical crisis: cancelled flights, early retirements, unpaid leaves of absence and layoffs. It is hard to say when the sector will go back to normal 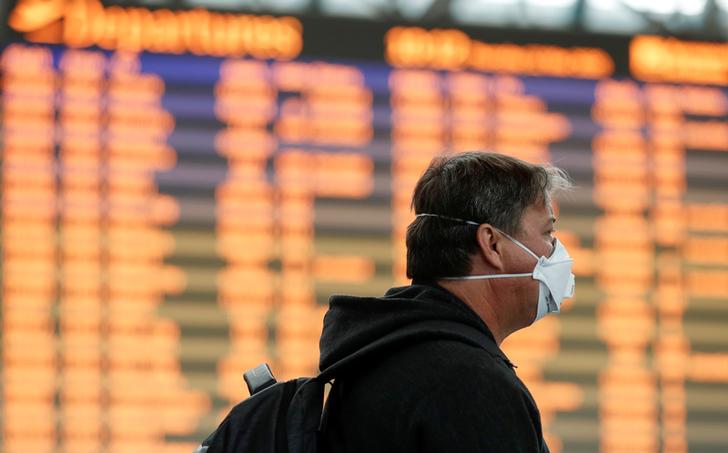 A man wearing a protective face mask stands in front of an information board at Rome’s Fiumicino airport, on the third day of an unprecedented lockdown across of all Italy imposed to slow the outbreak of coronavirus, in Rome, Italy, March 12, 2020. REUTERS/Yara Nardi

This is the first of a series of two articles dedicated to the impact of coronavirus on air transportation.

Under normal circumstances, 277 flights were scheduled to take off and land from Rome’s Leonardo da Vinci international airport on Thursday, March 19, 2020. Only 44 actually departed and arrived. Because of restrictions imposed by national authorities, dozens of flights were cancelled, grounding aircrafts and crews. The same scenario, which has already been witnessed in Chinese and Asian airports in the past months, was replicated in airports across the world: global hubs such as Paris-Charles de Gaulles, London-Heathrow and New York-John F. Kennedy, which usually handle thousands of passengers every day, have dramatically decreased the number of departures and arrivals to comply with restrictions on travel imposed by the governments of countries affected by the COVID-19 pandemic. The air transportation industry in Asia, Europe and the Americas is going through a historical crisis, set to break the records reached during the Great Recession and in the period after the attacks on September 11, 2001.

The number of actual and scheduled flights to and from Rome-Fiumicino airport. Source: flightradar.com 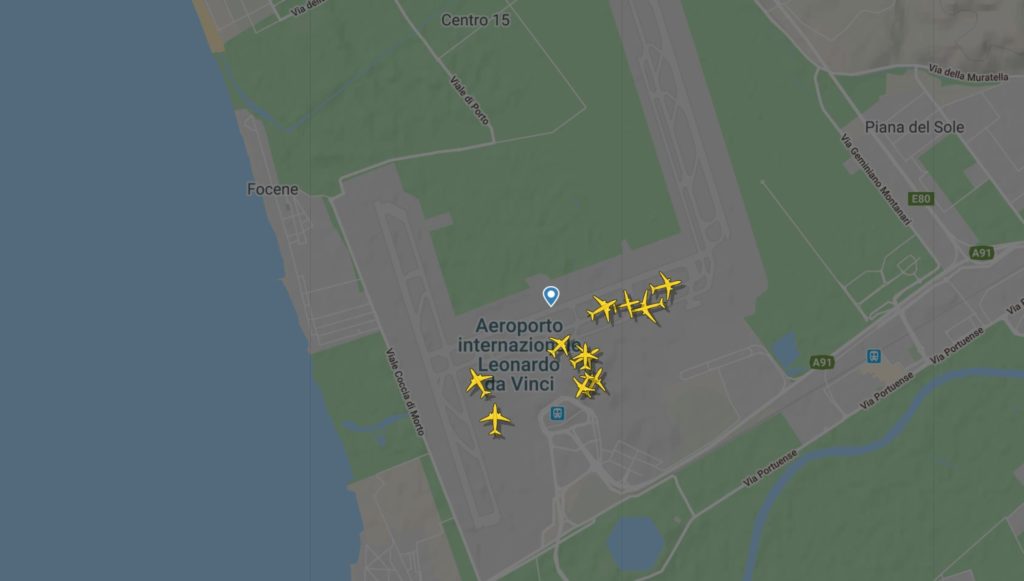 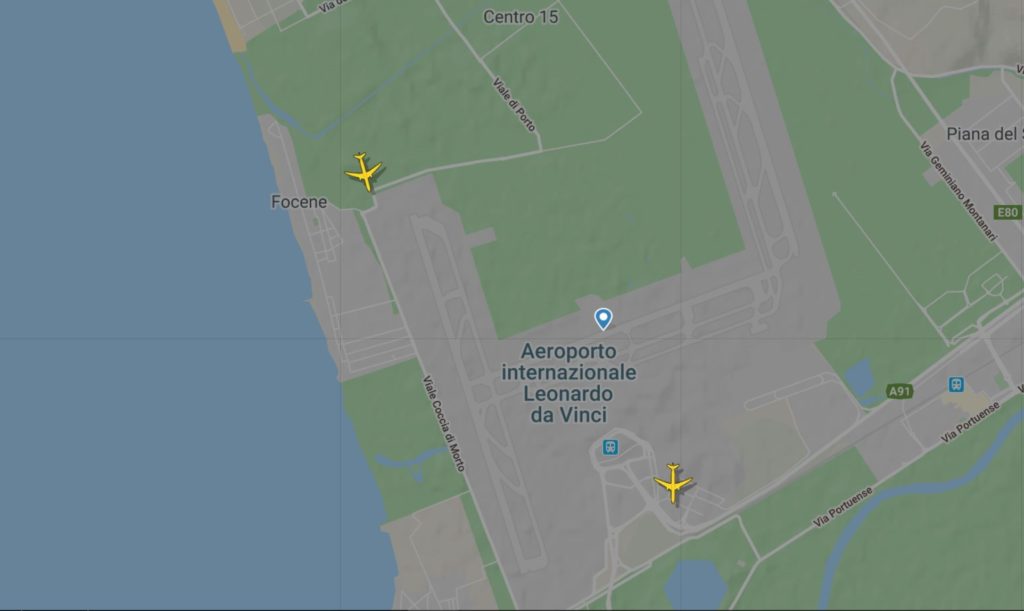 Several carriers are set to cut most of their flights, on every continent. Among the most recent decisions, American Airlines, the U.S. airline with the largest fleet in North America, has chosen to cut flights by 75%. Delta Airlines and United Airlines have decreased flights by 70% and 50% respectively. Other companies have opted to shut down temporarily until restrictions are lifted. Carriers such as Austrian Airlines, Brussels Airlines and SAS, just to name a few, have shut their businesses down to avoid further losses. Others should soon follow suit. A sudden and massive drop in demand across the world has led companies to take such dramatic decisions. Although the price of fuel has fallen dramatically, airlines are hemorrhaging cash. Airlines’ stocks listed on the New York Stock Exchange have lost, on average, as much as 56% of their value compared to last year, thereby compromising their capacity to finance their operations. Similar losses were recorded in stock exchanges in other countries. The future trend of airline stocks will largely depend on the timeliness and the scope of future government relief interventions. 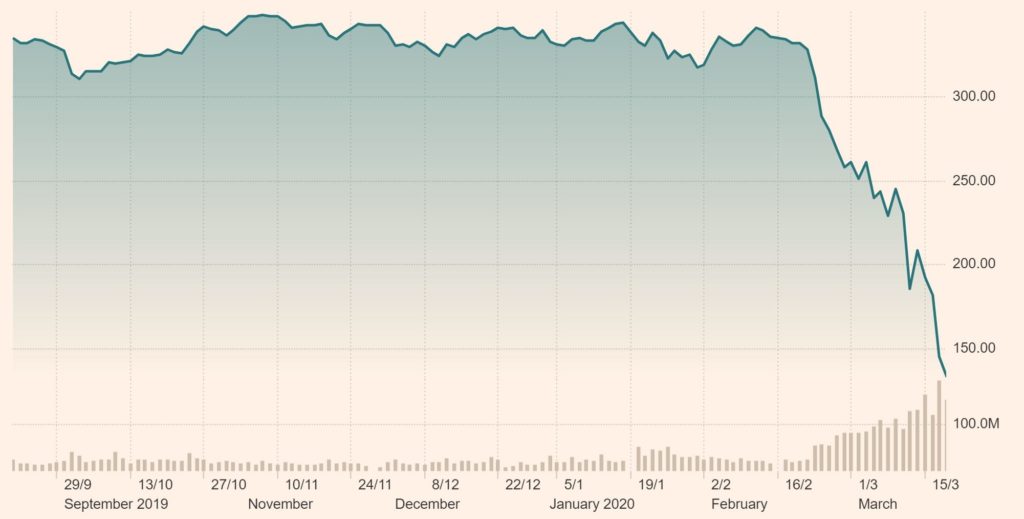 The S&P 500 Airlines index, grouping stocks of the largest airlines in the U.S. (updated on March 15). Source: the Financial Times

The first to be impacted by the turbulences hit by the sector are airline employees, including pilots, flight attendants and ground crews. In an attempt to curb losses, companies have decided to reduce most of their staff through a series of measures, including layoffs, paid or unpaid leaves of absence and early retirement of their most senior employees. Norwegian Air has decided to lay off over 7,000 employees, equal to 90% of the workforce. SAS has decided to reduce its workforce by the same percentage, together with numerous other companies in Europe and elsewhere.

Several companies, including those with healthier financial statements and larger cash reserves, have already started to invoke government relief interventions, an option that may have sounded impractical up until a few weeks ago. Carsten Spohr, CEO of Lufthansa, in a message addressed to his company’s employees, affirmed the need for public intervention to support airlines. The CEO of Virgin Group, which includes Virgin Atlantic airlines, has reached out to the British government, asking for interventions worth 7.5 billion pounds to support the airline industry in the United Kingdom, joining several other industry executives in asking governments for financial support. IATA, on behalf of the companies it represents, has suggested a series of measures, which include direct government financing to companies, loans and the purchase of bonds issued by airlines, together with the reduction or the suspension of tax payments.

Public authorities seem to have listened to the airlines’ pleas for help. The EU Commissioner for Competition, Margrethe Vestager, has announced the possibility for governments to provide direct financial support to industries that have been affected the most by the pandemic, including air transportation, to ensure lines of credit to the companies that have suffered the most. The measures that have been asked by companies should be therefore implemented soon. The French government is already considering offering a loan to Air France-KLM, to enable the company to continue operations until the end of the crisis. Other governments have considered more drastic measures. The Italian government, which was looking for a buyer for Alitalia, has decided to nationalize the company, given the current market conditions.

Some countries, including Italy, have asked airlines to use their aircrafts to rescue citizens stranded abroad because of the increasing number of cancellations of flights to and from countries affected by the pandemic. Alitalia, in cooperation with the Italian Ministry of Foreign Affairs, is already repatriating tourists and Italian citizens stranded abroad, as well as Israel’s El Al, the Netherlands’ KLM and Spain’s Iberia. Several companies have encountered considerable difficulties in reaching and embarking their passengers. Iberia, for example, was denied the permission at the airport of Guayaquil in Colombia. The local government deployed law enforcement vehicles on the runway to prevent the aircraft sent from Spain that was supposed to pick up stranded Spanish passengers from landing. Such a decision was taken without the agreement of national authorities, which had granted the clearance to land to Iberia’s and other repatriation flights.

The situation of the air transportation industry, just as in other sectors of the economy, is in constant evolution. It is difficult to say when the sector will go back to normal, given the skyrocketing number of COVID-19 cases in Europe and North America and the difficulties in preventing contagion.