Last Wednesday, Angela Merkel revoked the decision concerning the Easter holiday lockdown. The last few weeks have been remarkably tough for her, also for the face masks scandal 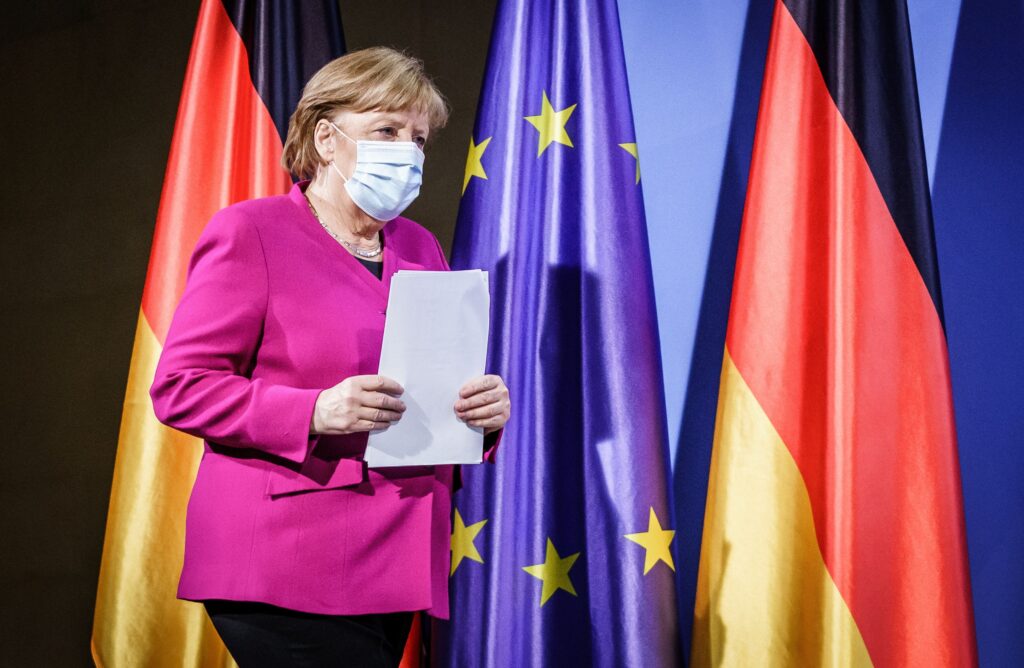 German Chancellor Angela Merkel arrives for a statement after video conference of EU leaders at the Chancellery in Berlin, Germany, March 25, 2021. Michael Kappeler/Pool via REUTERS

“Merkel culpa”, “The false apology”, and “The Easter debacle”. These are just a few of the headlines that appeared on Thursday in the opening pages of German newspapers. A sign that not everybody in the country has accepted the chancellor’s apologies.

Last Wednesday, German Chancellor Angela Merkel revoked the decision concerning the Easter holiday lockdown. It was to be extended two more days for a total of five straight: the regulation had been barely approved 48 hours before, in a wearying marathon conference between the central government and the federated states. However, it was not feasible to accomplish in such little time, especially considering the limited benefits. The chancellor asked for forgiveness before the Parliament, bearing responsibility for the miscalculation, saying she was conscious of the sense of insecurity and confusion she contributed to the issue.

In Germany, the atmosphere is indeed tense: the population feels overwhelmed and frustrated after a year of sacrifices, as the well-known myth of German efficiency is cracking right under their noses. At the beginning of the crisis, the government took charge of the situation almost flawlessly. No time went wasted, and the measures applied managed to contain the virus from spreading. Today, the circumstances are decidedly different: the government seems to be clueless about the exponential growth of infections, mainly due to the virus’ mutations. The back and forth in the decision-making process has left its citizens disoriented. The u-turn on the Easter plan appears to be an ultimate confirmation. It leaves the population without a resolute leader to confide in.

The greatest disappointments concern the vaccination campaign: the government presented it as a game-changer in the crisis and promised to be rapid and efficient, to reach immunity as soon as possible. For the time being, 10% of the population has received the first dose, while 4% has received both. But even doubling the doses now will not be enough to stop the third wave.

As a matter of fact, the last few weeks have been remarkably tough for the German chancellor and her Christian-democrats. First, in the regional elections in Baden-Württemberg and Rheinland-Pfalz in mid-March, they achieved poor results. Nonetheless, the CDU confirmed itself as the second strongest party. However, it might not be part of the local governments since there is another option on the table: the so-called traffic light coalition composed of Greens, SPD (red), and Liberals (yellow). This alternative has been food for thought also at a federal level. Olaf Scholz (SPD) affirmed right away that, for the first time in years, there is a concrete opportunity to rule without the center-right party.

The government’s management of the pandemic is in the eye of the storm for another reason, too. A few Union deputies are involved in the Maskenaffäre, a corruption scandal concerning mask supplies. Nikolas Löbel (CDU) and Georg Nüsslein (CSU, the Bavarian twin party) served as mediators in the purchase agreements but allegedly took advantage of the situation. Even the Minister of Health, Jens Spahn, has been hit by the scandal. He bought masks by Burda GmbH; his husband is a representative of this company. It is not clear yet whether it is a case of conflict of interests or not. His position is particularly delicate since he plays the role of protagonist in the fight against the virus. But that is not all. Mark Hauptmann (CDU) is accused of pocketing Azerbaijan money as a lobbyist while serving in the Bundestag.

The accusations led Löbel and Hauptmann to give up their seat in Bundestag. Nüsslein abandoned the parliamentary group. On the other hand, Spahn affirms that he has worked honestly. These scandals have cast a shadow on the CDU/CSU Union as a whole. The population is now having second thoughts about its good faith.

In a new appearance on Thursday, Merkel has tried to regain the trust of her citizens. She began the speech by talking about the main issues presented in the European Council in March. She also underlined the importance of being part of the European Union in the fight against the virus — this in an attempt to win back those who are doubtful. The main criticism about the vaccination campaign is that Germany keeps running out of doses, even though one of the first developer companies, Biontech, is based right in Mainz.

As a matter of fact, the firm provides supplies also for other EU countries. For Merkel, solidarity is a fundamental principle of the Union and cannot be questioned. Moreover, the chancellor stressed the importance of running Covid swabs as she believes that while awaiting the vaccine, testing is the most effective tool available. It leaves, however, the responsibility in the hands of local authorities and citizens. In an attempt to give the audience a hopeful message, the chancellor showed her usual temperament. She encouraged the citizens not to let themselves be overwhelmed by discomfort, to see the glass as half full instead.

According to a poll by ZDF Polit Barometer, the effect of Merkel’s hesitation and the apologies have divided the population, but her popularity holds up. At any rate, this is the first time in sixteen years the chancellor acknowledged a mistake: a few commentators affirmed right away that this event is going to appear in history books. It was a risky show of weakness, but necessary to recover an image of reliability among citizens and her political majority.

Both Germany and the European Union are concerned about the elections taking place next September. The myth of a solid and faultless CDU no longer holds. Merkel dropping out of German politics is going to leave a void hard to fill. She has been the most important and longest-running politician on the continent, and at present, there is no adequate replacement to pick up the gauntlet. It is possible that the balances will change, especially in Brussels where the Union will lose its most influential guide.