The healing power of football

Bosnia-Herzegovina, deeply divided by the Balkan War, finds unity in the World Cup. 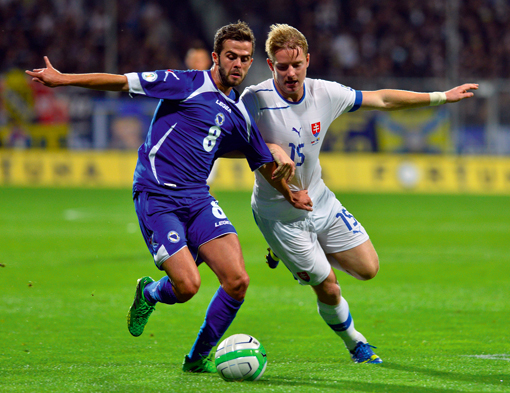 Next June, in Brazil, a team that climbed out of the ruins left at the end of the Balkan war will make its debut on the world football stage. It will be representing one of the poorest countries in Europe, crushed by the economic crisis and still licking the wounds of its ethnic conflicts. We’re talking about the Bosnia and Herzegovina national football side that played its first ever official football match on November 30 1995, nine days after the signing of the Dayton Agreement that ended the Yugoslav civil war.

Played in blue jerseys bought in an airport, by a pick-up team organised at the last moment, that game brought a 2-0 defeat at the hands of Albania.

Almost two decades later, last October, 50,000 people joyfully and peacefully invaded the streets of  to celebrate Bosnia’s historic qualification for the Brazil World Cup. A night of collective euphoria in the city that was a symbol of the Balkan powder keg, the city that has withstood the longest siege in modern history, 46 months, from April ’92 to February ’96.

Sarajevo was once known as the Jerusalem of Europe, owing to the peaceful coexistence between different religions, languages and ethnic groups. Today the Serbo-Bosnians disparagingly refer to it as the European Tehran. In actual fact it’s a Muslim city whose multicultural spirit is now more obvious in the symbolism of its monuments that in the hearts of its people. Yet on that October night in Sarajevo the streets were filled with Bosnians of all ethnic groups.

The team, like the crowd welcoming it home with a chorus of “you are the pride of the nation”, is a fully multi-ethnic squad, in which the Bosniaks (Bosnians of Muslim origin) have no trouble playing alongside Serbs and Croatians. A group of players who for the most part are sons of the diaspora triggered by the war, when almost two million people dispersed in every direction, but who have decided to play for the country of their parents rather than their adoptive one.

The two most talented players on the side are indeed Bosniaks: the Rome midfielder Miralem Pjanic, and Manchester City’s forward Edin Zdeko. The first was just one year old when he followed his player father to Luxembourg. The second was instead forced to flee and migrate from village to village, dodging the bombs and snipers. Stoke City’s keeper, Asmir Begovic, a Muslim from Trabinje, fled much further afield, to Edmonton in Canada.

The captain, Emir Spahic, was instead born in Dubrovnik, in Croatia, from a Montenegrin father and a Serbian mother and plays for Bayer Leverkusen.

Even the strongest individual player in the world, Zlatan Ibrahimovic, could have played for Bosnia: his father was a factory worker from Bĳeljina who emigrated to Sweden, his mother a Croatian housewife. He was born and grew up in Malmö and opted to play for the Nordic side.

The trainer, Safet Susic, is also a Bosniak and scored a hat-trick against Italy in 1979 for Yugoslavia, the best player ever to don a Paris Saint Germain jersey, according to France Football. Originally from Zavidovici and Bosnian since 2009, Susic was among those who right from the outset has fought to turn the national side into a symbol of reconciliation.

“This team unites people, until a few years ago it would have been unimaginable for Bosniaks, Serbs and Croatians to support us. Now we all feel Bosnian.”

Met by popular jubilation in cities with Bosniak majorities, the Bosnian side’s qualification for the World Cup has left parts of the country cold. In Banja Luka and other centres of the Serbian Republic of Bosnia there were no motorcades, in fact such was their anger at Serbia’s elimination that Bosnia’s decisive game wasn’t even shown on TV. “I’ll root for Bosnia when they play Turkey, and that’s that,” was the frosty comment of the Serbian Republic’s President, Milorad Dodik.

Even the Croatians in Herzegovina were largely indifferent and preferred to celebrate the Croatian qualification.

Bosnia’s multi-ethnic national side reflects what the country could be like tomorrow but so far is not. Everything is still split three ways: the population (48% Bosniak, 37% Serbian, 14% Croation), the territory, the government.

Until 4 years ago, even the Bosnian Football Federation was run by three presidents constantly at each other’s throats. Corruption was so outrageous that in 2007 the players were forced to go on strike to protest against it.

However, in 2011 FIFA put its foot down and suspended Bosnia from international competition. An emergency committee was set up headed by Ivica Osim, the last manager of a united Yugoslav side who stood down in ’92 in the wake of the bombing of his home town of Sarajevo. The 73 year- old Osim convinced the ethnic factions to take a step back, setting in motion a normalisation process that has been instrumental to the amazing success of the Bosnian national side.

Football appears to the only unified institution in a country on which Brussels has shut the EU door due to the Bosnian failure to conceive a shared national future. Last February though, major protests broke out against corruption and poverty, uniting Bosniaks, Serbs and Croatians in protest across the board that was a distant reminder of the multiethnic national side that will take on Argentina in the World Cup.