Spoils, treasures and our artistic heritage. Many war movies are about the personal dramas of a handful of soldiers, who often stand in for the wartime experiences of armies and people at large. Films about the more strategic or abstract aspects of war are few and far between – a famous, Oscarwinning example being the biopic Patton, directed by Franklin J. Schaffner and cowritten by a young Francis Ford Coppola – because viewers like to be able to relate to the characters. A tiny subset of war films has looked at the complex fate of art during armed conflicts, a rich subject matter only a few features have explored, including John Frankenheimer’s 1964 classic The Train, with Burt Lancaster. 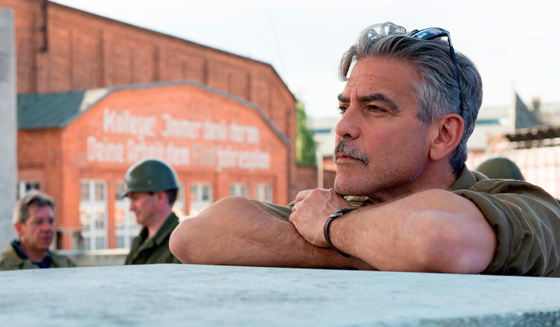 Recently however there have been a number of films about quests to save art during wartime, including the high-profile, George Clooney-directed The Monuments Men – also starring Matt Damon, Cate Blanchett, Bill Murray and John Goodman – and German director Volker Schlöndorff’s Diplomacy, an adaptation of a French play by Cyril Gely that’s practically a two-hander and stars French acting veterans André Dussolier and Niels Arestrup.

Both works were shown at the Berlin Film Festival last February and are fictionalized versions of events that occurred during WWII, when Nazi Germany instructed its troops to raid Europe’s greatest art treasures for a planned Führermuseum in Linz, Austria, close to Hitler’s provincial birthplace.

Initially this was achieved by targeting the works in private collections belonging to Jewish Europeans by passing laws that essentially amounted to simple expropriation, but as the German Reich expanded, works from Italy, France, Spain and Belgium found their way to the Reich.

As The Monuments Men shows, thousands of precious and irreplaceable artworks were moved to Germany and there is something satisfying about seeing a US blockbuster in which the “MacGuffins” – the objects that the protagonists of a film want to obtain at any cost – are Renaissance masterpieces such as The Adoration of the Lamb by the Flemish Van Eyck brothers and Michelangelo’s Madonna of Bruges. 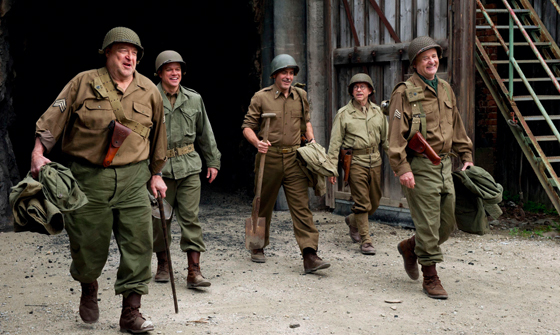 Incidentally, both are works considered so valuable that this wasn’t the first time they were moved from their original Belgian locations. Napoleon had had them taken to France and they were only returned after his defeat at Waterloo – something briefly mentioned in Clooney’s film. Both Napoleon and Hitler saw real value in these masterpieces and, tellingly, treated them much better than they did their own armies and people.

The real question at the heart of The Monuments Men, too often overridden by faintly humorous banter, is certainly connected to the value of art: Can art be worth more than a human life? In Clooney’s film, as in historical reality, the Allied military personnel in charge in France often refused to aid the handful of “art protectors” – even backed by a US presidential mandate – since they refused to risk their men’s lives for a painting, a sculpture or a historical building.

Diplomacy; which unlike Clooney’s largely outdoor extravaganza, is almost entirely set inside a Nazi office with a view over occupied Paris; explores similar material, as the Nazis, towards the end of the war, decide to raze the French capital to the ground, cancelling hundreds of years of architectural and artistic marvels.

The film is basically a night-long conversation during which the Swedish consul- general, Nordling (Dussolier), tries to reason with Dietrich von Choltitz (Arestrup), the Nazi governor of Paris on the eve before the explosives that’ve been placed all over the city are to be set off, as per the instructions received from Berlin.

The result, as Nordling argues, attempting to convince his German interlocutor, would be the destruction of a heritage that belongs not to any one person, but to France and to humanity as a whole – and which then must be preserved at all costs.

The Monuments Men rarely induces the sensation of urgency or impending danger involved in the mission of this team of cheerful art-nuts as they drive through Europe looking for fancy masterworks to save while occasionally running into trigger- happy Germans.

Diplomacy is instead an edge-of-yourseat thriller consisting entirely of dialogue, in which the future of Paris and of French and European art in general hang in the balance.

The fact that the outcome of Diplomacy is already known, since Paris wasn’t destroyed, doesn’t make the material any less nail-biting. It is firstly a duel of minds and ideas and secondly, things unexpectedly take a personal turn when von Choltitz reveals a key piece of information (the same general had earlier been portrayed in René Clement’s Is Paris Burning?, also co-written by Francis Ford Coppola).

Though two of his group of eight men are killed trying to protect or retrieve works of art, Clooney’s film never feels that personal – which perhaps explains the all-to-literal question from the US president during the film’s closing scenes: “Was it worth it for this man to die for a sculpture? Would he have wanted it that way?”

Ideally, the whole film should have been an attempt to explore possible answers to that question, a reminder that while some works of art can be transcendental – and so worth fighting, and dying, for – many others are simply bland technique.