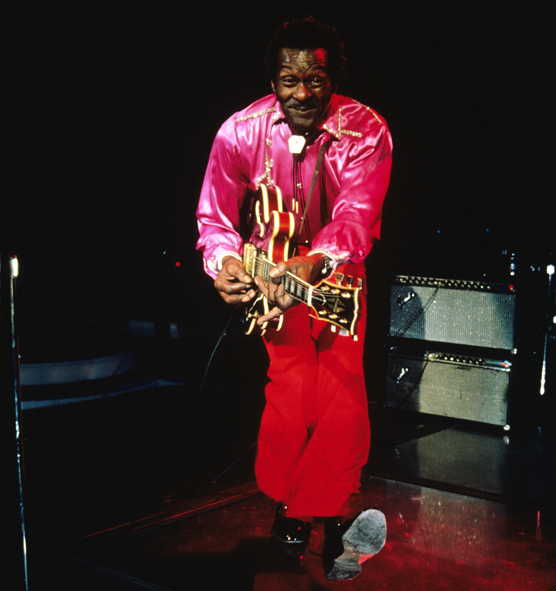 School is one of the narrative contexts that recur in rock'n'roll of the 50's: the secret language of 'real life' set against that of the teachers. Ten years later, in '68, the revolt against the establishment will be partially achieved. But with the demise of the great movements, the 'school days' will be the receptacle of all lost opportunities and a source of nostalgia.

SCHOOL DAYS – CHUCK BERRY (1957) This is the portrait of a youth who gets up in the morning to go to class and study American history, "practical math" and even, for rhyming purposes, "the Golden Rule". The song Is built around a typical Chicago blues chord sequence. The musicians that play on the track were some of the best in town, such as bassist Willie James Dixon e drummer Fred Below, both very well known in Chicago at the time. Berry, then twenty eight, is actually addressing a listener who is ten years younger than himself and in all likelihood white and middle class:"You studyin' hard and hoping to pass/(...) And the guy behind you won't leave you alone." There's the meal in the lunchroom and the time to vent one's anger against a 'mean' teacher. But at three in the afternoon everything changes, you close up your books, and head for the juke box where for the price of a coin you can hear something 'really hot'. Meaning this song, with its explosive electric guitar solo and the slogan for the new era: "Hail Hail rock- 'n'roll/ deliver me from the days of old."

WONDERFUL WORLD – SAM COOKE (1960) A young man candidly admits he knows little of algebra, trigonometry, French and history. But he does know one thing: "But I know that one and one is two/ And if this one could be with you/ What a wonderful world this would be." Like in Chuck Berry's song the secret pleasure of author and listener is to be able to tear the names of the school subjects from the language of adults and build a secret, sexy language with them. But unlike the male, rebel rock'n'roll, Sam Cooke's soul also addresses girls: he pronounces words they'd like to hear spoken. The idea reappears ten years later in Abc by the Jackson 5 (when Michael Jackson was still a child) that is addressed to a girl who is very diligent at school: "Reading, writing, arithmetic/ Are the branches of the learning tree/ But without the roots of love everyday girl/ Your education ain't complete."

ITCHYCOO PARK – SMALL FACES (1967) American rock'n'roll hated school, but up to a point. No school, no girls; no youthful angst, no rock'n'roll. One has to wait for the beginning of the psychedelic area to find a song like this: "I'd like to go there (Itchycoo Park) with you/ You can miss out school (won't that be cool)/ Why go to learn the words of fools?/ What will we do there?/ We'll get high/ What will we touch there? /We'll touch the sky/ But why the tears then?/ I'll tell you why/ It's all too beautiful." There are a few suggestions as to where this Itchycoo Park could be. In London. Perhaps infested by mosquitos and stinging nettles ('itchy'). The Small faces, a very mod and London based band, dressed these words in a dreamy and out of phase sound that left little room for doubt. They had the wit to suggest to the BBC sensors that the song was about their games as children, when they used to leap around on the garbage heaps near home ("we'll get high"). No one believed them. Except the BBC.

VALLE GIULIA – PAOLO PIETRANGELI (1968) And along comes 1968. It's difficult to think of another song that so accurately depicts a student march, with the slogan "no to the school of masters/ down with the government, resign" and the description of a couple crushed by a Police charge ("and you look at me with your weary eyes(... )/ and your smiles seemed dull/ there were certainly things that were more important").

In Ohio (1970), written for the four casulties during the clashes at Kent State University, Neil Young resorted to using a rather metaphoric ("Tin soldier and Nixon coming") and melodramatic language. Paolo Pietrangeli (with Giovanna Marini) just updated the epic forms of popular theatre. The clashes at Valle Giulia were not just the occasion of a famous speech by Pasolini about the police being sons of the people. Keith Richard's biography seems to suggest that the Rolling Stones' guitarist was in Rome at the time. He's supposed to have spent time in the occupied faculty of architecture and probably gained some inspiration from his stay.

THUNDER ROAD – BRUCE SPRINGSTEEN (1975) Years pass, you grow up and rock'n'roll feeds your nostalgia for the "school days". Springsteen is a master of the genre. "We learned more from a three minute record/ than we ever learned in school," he sings in No Surrender. This Thunder Road song is truly heartrending. Mary, who's no beauty and lonely, has just graduated. Her "graduation gown" lies on the ground. Bruuum the main character knocks at her door with his engine running outside. He's going to seek revenge for all the kids Mary's snubbed with a last offer of flight and redemption.

Bruce Springsteen's influence on certain school songs by Antonello Venditti, that are particularly well known in Italy, is stronger than at first meets the ear. Songs like Giulio Cesare and Notte prima degli esami (Night before the exams), written in the '80s when youthful rage and rock'n'roll had become unidentified objects.