Calling home when home is gone 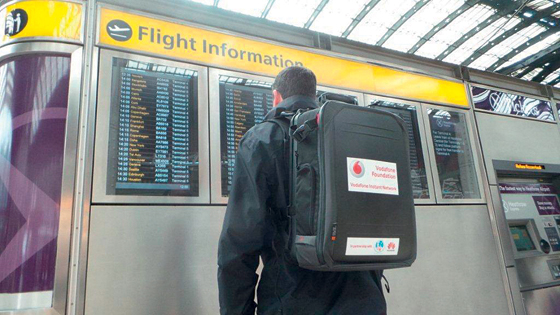 Mugunga is just a few miles from Goma, in the Democratic Republic of Congo. Furaha is here with her husband and two sons: "We're in Mugunga Three", she tells her brother on the phone, "We have no food, come and help us!".

After her parents were murdered by militiamen in the bloody wars raging in eastern Congo for two decades, Furaha had been trying to phone home for two long years, but always in vain until now. Mugunga is an enormous refugee camp, where around 90,000 people live in three giant camp sites. In spite of the efforts of humanitarian organisations, the camp lacks everything: the tents are pitched directly on the bare soil and, according to broadcaster France24, the little food that does arrive is often stolen by groups of armed men who attack the camp and the defenceless people living there.

Here a phone call really can make a difference: between life and death; between reuniting a family and leaving someone lost, maybe forever. Someone like nine-year-old Nirere, for example, another refugee in the Mugunga camp who found her mother after being separated for 15 months, all thanks to a phone call. To secure a happy ending to stories like those of Furaha and Nirere, the mobile phone company Vodafone is developing technology to restore cellphone connections, or create them from scratch in areas that have been cut off and isolated due to natural or man-made disasters.

The Instant Network Mini is a robust backpack with all the necessary tools to create a short range mobile network. It is small enough and light enough to be carried as cabin baggage on a commercial flight and to be taken to the most inaccessible and remote areas, where phone connections are crucial for humanitarian efforts.

"Miniaturisation was the main problem we had to solve", admits Oisin Walton, now head of the Vodafone Foundation project after previously helping refugees through Telecoms Sans Frontières, the NGO partner of the United Nations and the European Commission that provides emergency telecommunication services. "The challenge was to fit all that's needed to connect normal cellphones to the satellite communication network into a backpack of the size and weight (12 kg) that airline companies allow as carry-on baggage", explains Oisin. They managed to solve this challenge: weighing just 11 kilos, the Instant Network Mini backpack contains a satellite data transmitter, a terminal for GSM mobile connections, a battery, a foldable solar panel and three, 12-volt sockets for charging phones.

The device allows calls within a radius of approximately 100 m; it can be used for text messaging and even to transfer money through payment services like M-Pesa (the popular text message-based banking service first set up in Kenya and now common in other African states). And what's more, it's very easy to set up: "You don't need engineers to install it, a single operator can get it up and running in a matter of minutes", explains Oisin. It took the Vodafone Foundation's technicians 12 months to reach this point, in collaboration with Telecoms Sans Frontières and Huawei, the giant Chinese provider of global ICT solutions. The investment was around 50,000 euros.

The Instant Network Mini kit complements the main Vodafone Instant Network (VIM), a system that is fourtimes as powerful, has a range of 5 kilometres [3 miles], weighs 100kg [220 pounds] and fits into three suitcases. The VIM has already proved its worth: in November 2013, for example, just 24 hours after Typhoon Haiyan struck the Philippines, the system was used to restore mobile connections. Over the following month, the kit enabled 1.4 million text messages to be sent and 443,288 calls to be made.

"Before inventing this gear", remembers Oisin, "humanitarian organisations relied on satellite phones, but they were reserved for relief staff only. Enabling mobile phone connections means the civilians we go to help have the chance to communicate too, which is incredibly important for people who have been caught up in a catastrophe."

The new slim-line, lightweight backpack can be taken to areas that cannot be reached with the larger VIM model, but it will not be put on sale to the general public. The Vodafone Foundation and its partners are currently focusing on building 5 to 10 units to support their humanitarian programmes (Vodafone operates in 30 countries and has partner agreements with networks in 50 more). This is all part of a larger program called Vision2020: "Our aim is to bring the internet and its educational content to schools in refugee camps", says Oisin, "We want to give the 3.2 million children currently cut off from the rest of the world the same learning opportunities as their contemporaries elsewhere. So they stop feeling marginalised."

This objective is a long way off, but the first step has been taken in the Dadaab refugee camp in Kenya, on the border of Somalia. It is the largest such camp in the world, home to 400,000 refugees, 60,000 of whom are children. Here, the telecom company is installing 13 'tablet centres', with a total of 300 tablets connected to the internet, available for everyone to use.

Who knows, perhaps one day the children of Dadaab might grow up and be the ones to solve the refugee problem once and for all. Besides relieving hunger, the challenge is also to help these people overcome the terrible isolation of those who have lost everything.