Some fish stocks are coming back, but we’re still too fond of seafood. Aseries of alarming figures reveal how we humans are deluding ourselves about the state of our marine resources. 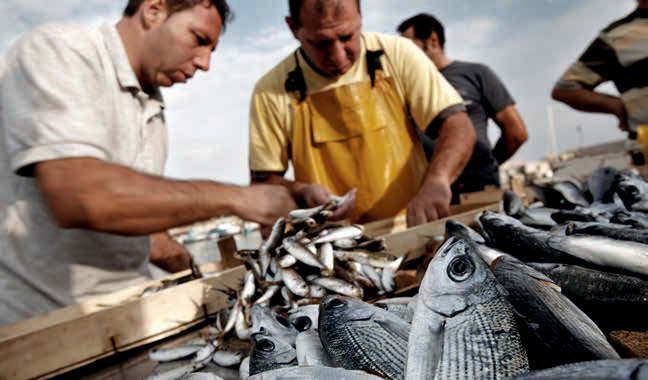 The catch is falling, but annual per capita global consumption of aquatic animals is rising: from 11.5 kg in the 1970s to approximately 19 kg today, according to data from the UN Food and Agriculture Organization (FAO).

Moreover, the per capita consumption of aquaculture products (farmed seafood) shot up from 0.7 kg in 1970 to 7.8 kg in 2008, 37% of total seafood consumption. In just over fifty years of industrial-scale fishing of the seas, 29% of currently fished species have collapsed, defined here as catches dropping below 10% of the recorded maximum, meaning the species is unable to repopulate. These figures were first published in 2006 in the magazine Science, by a team of marine biologists led by Dr Boris Worm from Dalhousie University (Canada).

The most striking aspect is the speed of the process: world fish stocks started to decline with the onset of industrialisation, but the collapse came after the Second World War. The first areas to experience fish depletion were the continental shelves (more specifically, the North Atlantic ones), so fleets moved out into the deep seas, where stocks are now also being quickly exhausted.

At this pace, Worm predicts “a global collapse of all species currently fished [on an industrial scale] by 2048.” Ecologists point out that one doesn’t have to fish a species down to the very last specimen for it to be pushed to extinction. There is a level below which a living population can no longer reestablish itself, at which point extinction follows.

Political solutions to reverse the trend are hard to sustain, partly because they would require drastic decisions that must be taken on a global scale. At the time of his study, Worm, and the scientific community, claimed that “resistance to overexploitation is linked to an ecosystem’s biodiversity, and the inability of the collapsed fish species to recover was also linked to biodiversity.”

In short, biodiversity is a natural shield against overfishing. Therefore, Worm suggests: “By restoring marine biodiversity through sustainable fisheries management, pollution control, maintenance of essential habitats, and the creation of marine reserves, we can invest in the productivity and reliability of the goods and services that the ocean provides to humanity.”

One potential solution is marine reserves, provided protection is total. Once established, the reserve becomes a repopulation zone, around which fishing could once again prosper (as fish don’t respect human boundaries and fishing beyond the reserve area is permitted). Unfortunately, there are very few protected zones and they only cover a modest portion of the total seas.

For example, only 4% of the Mediterranean’s surface area is protected, and of this only 242 square kilometres [150 sq mi] are totally safeguarded. So more reserves are needed, and greater controls to ensure they stay protected. But even more decisive action will probably be required, namely a net reduction in fishing. The pressure on fish stocks must drop by 20-50%, meaning fishing operations must be curtailed in areas where uncontrolled fishing is undermining the rich biodiversity. Worm has identified these areas, dubbing them ‘fish-conservation hotspots’. Nonetheless, changes are happening: recent studies show that the most industrialised countries are adopting sustainable fishery management practices and getting some positive results.

Countries like Norway, Iceland, the United States, Canada and New Zealand have stabilised or even reversed their losses to overfishing. Today, Dr Worm does see signs of progress: “I am a little more hopeful today. The key thing we are seeing is that many of the scientifically assessed stocks are stable or even improving due to stricter management. Unfortunately, there is little evidence that the rest of the world's seafood species are doing the same.

This means that we really have to learn from the success stories and reform fisheries worldwide. The EU is just doing some of that in their own waters, but they are still contributing in a large way to overfishing in other regions of the world.” For example, after cod stocks collapsed in the Atlantic, the fishing industry moved first to Alaska and, upon depleting resources there, went on to fish similar species in other waters. The upshot is that Europe and North America are now importing fish from African, Asian and South American seas. In the meantime, demand for seafood is rising. Thara Srinivasan, an ecologist from the University of British Columbia, notes, “Sushi is now a global fad. The appetite for shark fin soup in China, Singapore, Hong Kong and Taiwan has caused shark populations to plummet worldwide. Consumers are often unaware when tastes outlast a species’ commercial viability.”

In other words, stabilising and protecting fish stock is one thing, but it wouldn’t hurt to think twice before ordering that tasty fish fry-up.