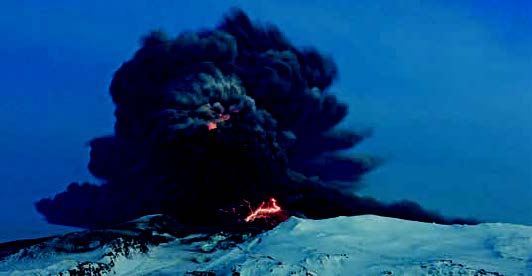 The idea - the desperate hope, some would say - is to screen our planet from the rays of the sun in order to slow down the pace of global warming. This planetary experiment would involve huge and largely unforeseeable risks, yet for some it is the only way out of the current climate crisis. The techniques proposed are referred to as “solar geoengineering” or Solar Radiation Management (SRM) and are based on the observation of nature: just as volcanoes are able to cool the planet by rapidly erupting vast quantities of gases and particulates into the atmosphere, a controlled release of appropriate substances could shield us from solar rays.

The Philippine volcano Mount Pinatubo successfully achieved this in 1991, when it spewed 10 million tons of sulphur dioxide into the atmosphere, forming aerosols that lowered global temperatures by nearly a degree for roughly a year. This though requires colossal volcanic events, even more impressive than the pyrotechnics of Iceland‘s Eyjafjallajokull eruption, which led to a temporary reduction in CO2 emissions due to the grounding of flights in Europe, but otherwise had little overall effect on the global climate.

Atmospheric aerosols do not have a long lifespan and after a year or two the volcano effect subsides. It is possible though that their impact on climate has been underestimated. Volcanic emissions may partly account for the discrepancies between (cooler) observed temperatures and those predicted by climate specialists over the past decade.

In a study published in Nature Geoscience magazine, Benjamin Santer, of the Lawrence Livermore National Laboratory in California, calculates that eruptions taking place since 1998 may explain at least 15% of the difference between measured and expected global temperatures. Santer’s finding came as a relief to proponents of the ‘greenhouse effect,’ embarrassed by the inaccurate predictions of recent years. If the result is correct and volcanoes do significantly cool the planet, couldn’t we then, as some enthusiasts propose, make them erupt artificially?

It’s certainly very tempting, but Santer and others are convinced that imitating volcanoes is dangerous: “Actions of this kind, even if successful in slowing global warming, could have unpredictable effects on the environment.” According to David Keith of Harvard University – who also directs Bill Gates’ Fund for Innovative Energy and Climate Research – controlling the atmosphere artificially is instead possible.

He believes that moderate deployment of these techniques would reduce climatic risks and says: “There are a number of substances we could feed into the atmosphere, sulphates for example, whose behaviour and drawbacks are well understood, but there are others that could be even more effective that we still know little about.” One example is table salt, which, seeded into maritime cloud formations, could make them more reflective. Keith agrees that these technologies must be used carefully and “do involve an element of risk.” Given the inability of the governments of industrialised nations to come up with radical alternative solutions, the ‘Plan B’ of geoengineering might warrant attention. Keith and other scientists suggest that the method would be economical, quick and effective -words that are music to the ears of cash-strapped governments. There are however many doubts. The effect on the ozone layer could be devastating.

Then there are the ethical and political implications: who has the right to decide to implement an experiment that affects the entire planet? Further, reliance on geoengineering could distract from what some activists view as the real problem: reducing greenhouse gas emissions. “The discussion over these techniques is heating up,” explains Dane Scott, Director of the Mansfield Ethics and Public Affairs Program at The University of Montana. “At present, the debate on these options is pretty low key, partly due to the lack of serious research data. Solar radiation management is relatively cheap and feasible, but its implementation is still loaded with uncertainty.” Scott points out for example that, “in lowering the Earth’s average annual temperature, an SRM project might have the side effect of altering rainfall and monsoon patterns, which could have significant impacts on local agriculture and sensitive ecosystems.” The first studies on the possible effectiveness of geoengineering are now becoming available and are anything but optimistic. In a paper published in Nature, David Keller of the Helmholtz Centre for Ocean Research in Kiel, Germany, examines the effectiveness of five geoengineering technologies, including stratospheric aerosols. According to Keller and his colleagues, these technologies would not be able to prevent the 2°C increase in surface temperature forecast for 2100. As they see it, even the combined use of a variety of technologies won’t be able to protect us from climate change risks and, Keller adds, “they could produce serious collateral effects” – a result that the academic world does not find surprising.

John Shepherd, of the UK’s Southampton University, says: “This study confirms that geoengineering is not a ‘magic bullet’ that will save us from global warming.” He goes on to stress that methods modifying biological and chemical equilibria on a planetary scale may have serious repercussions. Rather than a magic bullet, solar radiation management solutions could turn out to be ‘friendly fire’.