Khorgos, a pearl in the desert

A natural cross-roads between Russia, China and Eastern Europe has now been transformed into a huge land trading hub, with no tariffs or VAT

The linchpin between East and West, in all likelihood, can now be found in the eastern deserts of Kazakhstan, on the border with China, where a land port has begun to operate in recent years that is fated to become one of the most important logistics and trade hubs along the new Silk Road.

This is the port of Khorgos, commonly known as a dry port, a land port, meaning an actual hub for goods shipment that has been built in the middle of nowhere in just a  few years yet in this very short period of time has already become a major inter-modal centre capable of connecting China to Central and Western Europe.

The port of Khorgos is the most startling representation of the cooperation between China and Kazakhstan in what has been entitled the Belt and Road Initiative, the new Silk Road, a monstrous project costing upward of 1 trillion dollars and with which Beijing intends to connect Asia, Africa and Europe with an infrastructure network that will spread its tentacles over sea and land. Thanks to its strategic position almost half way between China and Europe, the Khorgos port can offer a quicker way of shipping goods compared to sea shipping, especially for manufactures of specific kinds of goods – and electronics in particular – for which fast shipment is an absolute priority.

Using land shipping, via Khorgos, freight trains can reach Europe in a little over two weeks, almost a third of the time it takes sea shipments to undertake the same journey.

What is even more surprising, looking at the expansion of the special economic area in which the port of Khorgos is located, is the amazing speed with which it was conceived, built and has finally become fully operational. Before 2010, when works began at the construction site, all one could hope to see along the China-Kazakhstan border a dusty expanse of desert. Now, just a very few years on, a special economic zone has sprouted out of nowhere, along with an important duty free shopping area straddling the border between the two countries, and even a brand new city. The building of the port in Khorgos began in 2014, and by the summer of 2015 the dry port was already fully operational.

The funds for the creation of the port in Khorgos, approximately 210 million dollars, were put up by the National Kazakhstan Railway Company, the Kazakhstan Temir Zholy, and by a Kazakh sovereign fund. In 2017, the Chinese shipping giant COSCO and the Jiangsu Lianyungang Port, two Chinese state owned companies, purchased 49% of the port, and was particularly keen to promote its subsequent development. The stated objective for the dry port is to achieve an annual turnaround of 500,000 containers by the year 2020.

Among China’s Central Asian partners that are taking part in the Belt and Road Initiative, Kazakhstan is not only the most important economy, but also the country with the highest potential for growth. It’s certainly was no coincidence that the new Silk Road was first announced in what was then known as Astana, Kazakhstan’s capital, renamed Nur-Sultan in 2019, as far back as 2013. In the three years that followed, Kazakhstan signed contracts with China worth the tidy sum of 50 billion dollars, with most of them earmarked for the country’s transportation, logistics and infrastructure sectors.

The China-Kazakh projects connected to the BRI, of which the Khorgos port is the brightest star, seem to integrate perfectly with the Nurly Zhol, Kazakhstan’s national programme worth 9 billion dollars which is supposed to modernise the country and enhance its own infrastructural network. The idea is a simple one: to transform Kazakhstan into one of the 30 most developed countries in the world before 2050. With such a formidable ally as the Khorgos port, constantly growing and expanding, the objective seems very much on the cards.

The dry port would effectively seem to be heading in the right direction. In the first nine months of 2018, the Kazakh rail station of Altynkol – which contributes to increasing the traffic of the Khorgos port – handled over 350,000 containers, approximately double the amount it saw file through its sidings during the whole of 2017. The goods transiting through Khorgos – mostly electronic devices and spare car parts – are subsequently ferried to Europe via the multi-modal corridors of the New Silk Road, travelling from Central Asia to the Caspian Sea and the Caucasus.

The land port is an essential component of Khorgos’ special economic zone, an area of almost 6 square kilometres that includes an industrial park and a logistics hub. One of the port’s most interesting operations is the transfer of containers from one rail system to another: China has a standard rail gauge of 1,435 millimetres, while Kazakhstan’s rail system, which dates back to Soviet times, is 85 millimetres wider.

A few kilometres to the east of the Khorgos Port, on the border between China and Kazakhstan, a huge shopping district has sprouted up, a free cross-border trade area with shopping centres and shops stacked with low cost merchandise, particularly accessories, garments and cosmetics. This district, known as ICBC Khorgos (International Center for Boundary Cooperation), has often been confused with the Port of Khorgos and with the Chinese city of Khorgas, a modest urban settlement of 100,000 inhabitants located just beyond the border.

It’s not just ambitious commercial centres that are being developed around the port. Soon there will be an airport, but also actual towns. This is the case of Nurkent, a Kazakh town that is experiencing rapid growth and is situated just a few kilometres to the west of the land port. At the moment the new town already hosts around 3000 people, almost all of them employed by the port, but by 2035 it is expected that its total inhabitants will be closer to 100,000.

The worlds crossed by the New Silk Road grow in a hurry, at a speed that is sometimes overwhelming, and the town of Nurkent is perhaps the most obvious case in point. Its construction only began in 2013 and in the next three years approximately one million square metres of new residential buildings are expected to be commissioned.

Thanks to its specific geographical position in the heart of Eurasia, between Europe and Asia, Kazakhstan is in a position to secure a key place within the Silk Road’s infrastructural projects: its country is after all crossed by the two main multi-modal corridors of the Silk Road Economic Belt, the land stretch of the Belt and Road Initiative, and both thread through the Port of Khorgos. The first crosses Russia and Belarus, headed towards Europe, while the second is the one that leads to Iran and Europe via the Caspian sea, the Caucasus and Turkey. And the Khorgos Port is smack in the middle of this vast infrastructural network and stands a good chance of becoming one of the main players along the logistics corridors of the BRI.

The cooperation between China and Kazakhstan will continue even following the resignation of Nursultan Nazerbaev, the historic Kazakh president and the country’s forefather, who had been in power from 1991 right up to last March. His temporary successor, the former senate president Kassym Zhomart Tokayev, will be called upon to manage the country’s sensitive relations with Moscow, which considers Kazakhstan a historic ally and a solid guarantor of its continued influence over Central Asia, and obviously enough with Beijing, which is working on transforming the country (and has partly achieved its goal) into a key partner in the infrastructural projects of the new Silk Road, with the development of Khorgos one of the main efforts.

Much has been said and written about the land port in recent years: some claim it’s in the middle of nowhere, others that it will soon become “the new Dubai”. The truth is that the dry port, for which construction only began five years ago, has already attracted interest from all corners, an interest that is expected to grow in the future. In a great hurry, of course, as is customary with everything concerning the New Silk Road. 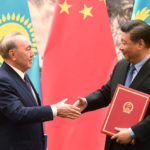 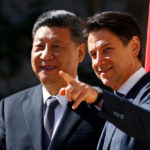