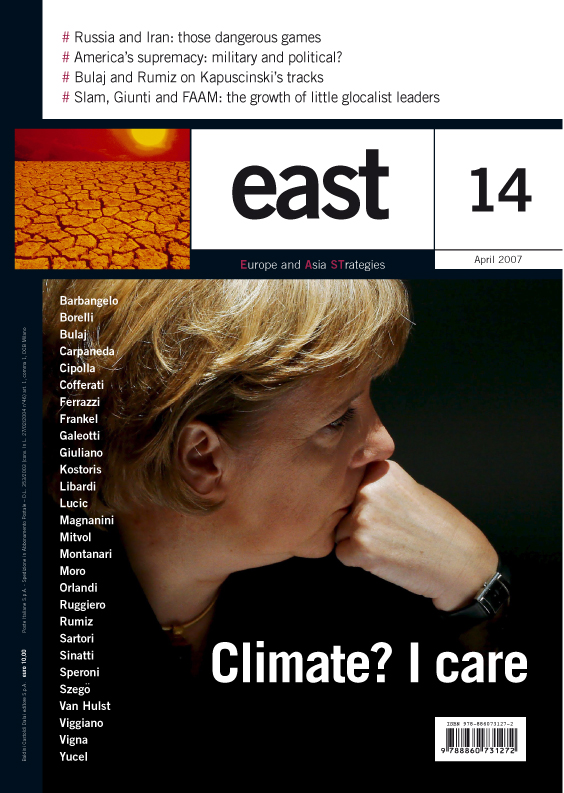 There are two reasons why we have chosen to put Angela Merkel on the cover. The first, as the title (Climate? I care) indicates, was inspired by the role the German Chancellor has played in the adoption of the first consistent European plan to reduce emissions. The second relates to the relaunching of the European Union 50 years after it was formed. The Dossier (with contributions by Donato Speroni, Fiorella Kostoris, Marzio Galeotti, Antonio Barbangelo, Noè Van Hulstand Simone Cofferati) and the editorial by Renato Ruggiero, who is collaborating closely with the Prodi government in this regard, aredevoted to these two aspects. Going beyond evaluations of the merit of the two projects, which are of course necessary, one thing is certain: Angela Merkel is demonstrating a determination and leadership capacity that Europe has not witnessed for a long time.

The geo-political articles by Piero Sinatti and Giorgio S. Frankel are extremely interesting. Sinatti looks at a hitherto relatively unpublicised aspect of Vladimir Putin’s foreign policy, i.e. relations with the Middle East. Frankel, for his part, analyses the race towards nuclear rearmament on the part of the U.S. as well as Russia and China: a worrying scenario that is worth re-examining in the coming months. As regards the economy, east has previewed a few chapters of a book on China by Alessia Amighini and Stefano Chiarlone. Another article worth mentioning is the one on the first European charter on the rights of sick people. Written by Giovanni Moro, the article anticipates the actual charter drafted by various Europeanassociations and institutions.

Finally, two different but undoubtedly original cultural contributions: an excursus by Massimo Libardi into the great Mitteleuropean philosophy and a profile of the anthropological journalist Ryszard Kapuscinski, who passed away in January this year, by Monika Bulaj and Paolo Rumiz.

“For centuries Europe has been an idea, holding out hope of peace and understanding. That hope has been fulfilled... European integration shows that we have learned the painful lessons of a history marked by bloody conflicts”. Those are the stirring opening words of the Berlin declaration approved by the 27 Heads of State and Government of the EU Member Nations and signed by the President of the European Commission and the President of the European Parliament. The words are not rhetorical; they express the wish for a realistic union of the past with the situation actually existing in Europe today.

Turkey, the challenges of the biggest European market

Does the US reign supreme in nuclear weapons?

It had looked as though the world was rid of the fear of nuclear war. Instead now, there are signs, in the East and the West, pointing in the opposite direction. The arms race, including atomic, is back. And in the US there are those who theorise a superiority capable of pre-emptively eliminating Russia’s and China’s nuclear arsenals. However true this is, it seems clear that the international scenario is getting ready for a new “cold war”