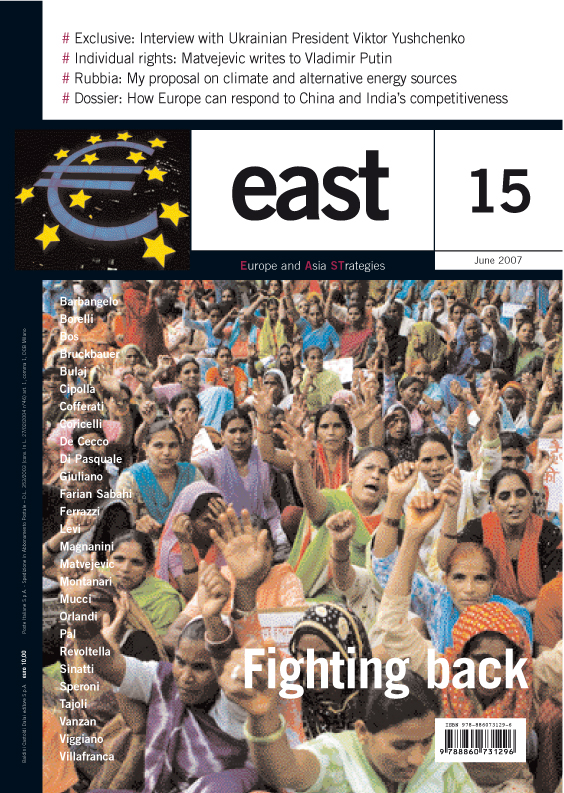 Their names will not be familiar to the general public,just as the name of the troublesome journalist Anna Politkovskaya was a little-known one until she was killed. However, there are an ever-increasing number of cases of women leading the ranks of the opposition to dictatorial regimes in various parts of the world. In this issue of east, Farian Sabahi, an Iranian journalist who lives and works in Italy,got together with Anna Vanzan to compile profiles of four relatively new women “fighting back”:Salma Hadad,a doctor and university professor in Baghdad, Tahira Bilquis, a Pakistani lawyer, Salima Ghezali, an Algerian journalist, and Noushin Khorassani, an Iranian essayist.Their stories are self-explanatory.
The themes of political rights and human rights in general are widely covered in an exclusive interview with Ukrainian President Viktor Yushchenko by Massimiliano Di Pasquale and Predrag Matvejevic’s open letter to Russian President Vladimir Putin.
The Dossier, put together by a group of economists coordinated by Debora Revoltella, is devoted to the problem of European competitiveness,up against Asia’s overwhelming competitiveness.
As for the Venice Forum,to be held on 21 and 22 June with energy as the central theme, we have interviewed Nobel Prize winner Carlo Rubbia and gone to the heart of the problems faced by oil’s main competitor,gas,in the articles by Piero Sinatti and Antonio Villafranca.
Finally, two reports that are well worth a mention: Monika Bulaj’s report on Lithuania and Emiliano Bos’s piece on Kosovo,seen from the windows of the “train of hope”.

I wrote the first few lines of this letter in Russian after the tragic death of Anna Stepanovna Politkovskaya, shot dead in the lift of her apartment block on Lesnaya Street in Moscow. A version of the text was sent to the Russian embassy on the occasion of Vladimir Putin’s recent visit to Rome.

The ill-considered constitutional reform in 2004; corruption; the political culture inherited from the USSR. In the judgment of the President of Ukraine, these are the reasons for the country’s latest and extremely serious crisis.

Being an oncologist in Baghdad today

Doctor and university professor Salma Hadad has worked since 1990 with children from all over Iraq who suffer from haematological tumours. The fact that she comes from a Shiite family was not a problem – until the war against Saddam Hussein.