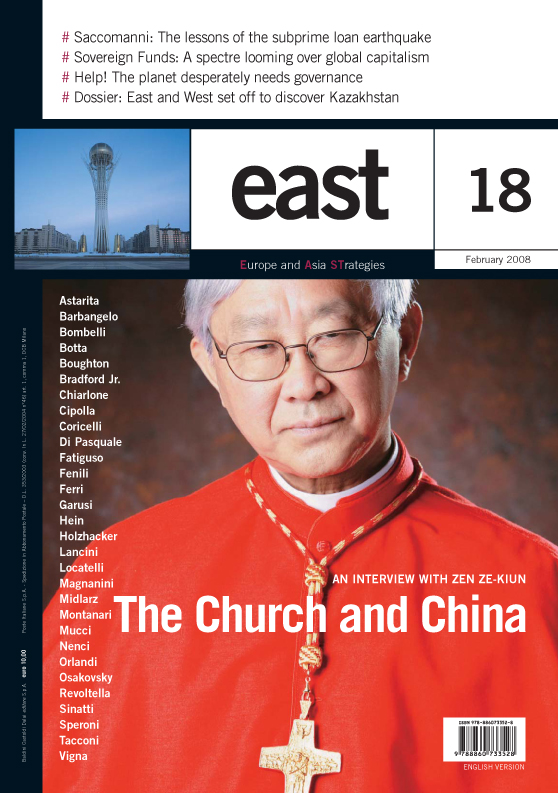 The planet is in dire need of global governance to restore balance to a model of development that continues to penalize the
world’s South, stem the trend towards environmental degradation, manage financial crises such as the subprime crisis, channel major migratory flows and rethink private and public ethics that reckon with the acquisitions and potential of science: except that the more public opinion becomes aware of the problem, the more the solution seems to move further away because of the short-sightedness and inconsistency of most of the world’s political leaders.What is to be done? Donato Speroni, James M. Boughton and Colin I. Bradford attempt a response to the question in the report on page 23.
The dossier of this eighteenth issue of east focuses on Kazakhstan, the big Central Asian country that has become the target of “special” attention, whether economic, political or strategic, from West and East alike. Economists and scholars in various fields have contributed to the dossier, namely Elena Fenili, Francesca Nenci, Vladimir Osakovsky,
Hans Holzhacker and Fabrizio Coricelli. The wide-ranging editorial by the chief executive of the Banca d’Italia, Fabrizio Saccomanni, focuses on the turbulence the subprime crisis has caused in the global financial scenario. Written before the steep stock exchange downturn end-January, the article provides in-depth analysis of the fundamental reasons for the crisis and outlines the steps that watchdog organisations are taking to forestall “surprises” of this kind.
Finally, we have an exclusive: Claudia Astarita’s interview with Cardinal Joseph Zen Ze-Kiun, the primate of the Catholic Church in China. The cardinal sketches a serene but forthright picture of the state of relations between Pope Benedict XVI’s Church and the Chinese government on the eve of the Olympics.

1983: the year the world risked catastrophe

Ronald Reagan on one side, Yurii Andropov on the other. In the early 80’s relations between the two superpowers, Usa and Ussr, were in a very delicate phase.  Then, on the night of September 26, the risk of an atomic conflict suddenly became very real.

Even in China, a company is made up of people

The principle that companies are made up of people who must be managed correctly also holds true in China... but in its own special way, as was found in a broad study on how human resources are handled in this great Asian country.

The brain drain: how to reverse the trend

According to the World Bank, a brain drain from poorer to richer areas of the world has involved over one hundred thousand students over the last ten years, and thirty-seven thousand in Europe alone.

Morgan Stanley estimates that sovereign funds in emerging countries have a fortune of US$ 2,500 billion, or about half of the world’s official reserves, to spend.