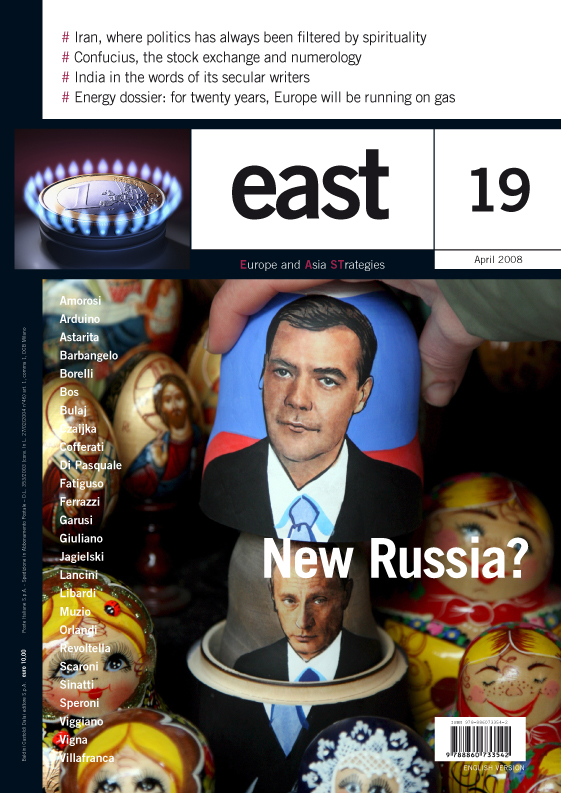 After the victory of Dimitri Medvedev in the presidential elections, Russia fixes its attention on the “four i’s”. As spelled out in
Piero Sinatti’s article, the first “i” stands for the administrative and economic Institutions programmed for renewal. The second stands for Infrastructure. The third for Innovation and, finally, the fourth stands for Investments, both on the part of the State and of the private sector.
The Medvedev-Putin team has targeted these four structural reforms to give Russia a new momentum and a new role. Fernando Orlandi instead examines “What is left of the Red Armada”, in an attempt to look into the credibility of Putin’s repeated militaristic warnings to the West. In an interview conducted by Cristina Giuliano, former prime minister of Russia Egor Gaidar, affirms his optimism for the future of democracy in Russia. east continues his narrative of China and India in this issue. Interest has in this case shifted from the economy of the two Asian giants to other themes: Claudia Astarita recounts one of her forays in the Chinese countryside; Alessandro Arduino looks into the Chinese penchant for betting and the Stock Exchange; Elena Viggiano provides details of the demographic situation in light of the problems resulting from the “war on young girls”. In the focus on India, Francesca Lancini interviews five Indian authors. These intellectuals trace a realistic and less than triumphant profile of their native country. In the reports, do not miss Monika Bulaj’s Iran portfolio and the journey of Emiliano Bos in Moldavia and Transnistria. Last, but not least, the Dossier dedicated to Energy, with a closer focus on Europe, its energy needs, projects and contradictions, as reported by Donato Speroni, Eni president Paolo Scaroni, Antonio Villafranca, Stefania Amorosi and Antonio Barbangelo. The latter interviewed Environment Ministry director Corrado Clini.

Up until now, it’s been just a simple diversion – a fever that caught on in bars, restaurants and locales in the West, where
(often inebriated) patrons sing the songs of their favorite artists out-of-tune and at the top of their lungs.

He’s a giant with kindly eyes, who you immediately feel on familiar terms with.  It’s pretty much like what happens in his TV ads, when he arrives with a big smile to offer his fresh pasta to a classic family.

A Passage to India in London

“Welcome to Southall”, says the sign in English and Gurmukhi script at the train station entrance. The Victorian setting of Paddington gives way to an Eastern universe where the only element of Englishness is a red Heathrow-bound bus.

They destroy documents with the maximum security, guarantee privacy and can be found in the offices of the CIA and the South African government and Japanese post offices. Elcoman builds these machines in Bovisio Masciago near Milan.