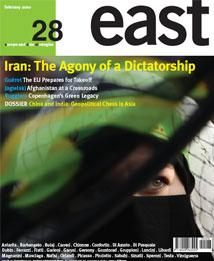 In Iran people continue to die on behalf of their belief in democracy. Though those willing to put their lives on the line can’t yet be called a majority movement, they do increasingly represent a large segment of the population. In China, Google is pulling out to avoid government censorship. In Afghanistan, the Taliban continues blackmailing families to discourage them from sending their children to school. In Angola, anti-regime insurgents grab headlines by firing at members of the Togo national soccer team. Based on such news, this phase of globalization seems fraught with political violence, the denial or abuse of basic human rights, and the repression of all forms of social dissent. We use the word "seems" because some observers insist that political violence is nothing new. Greater sensitivity to such violence, they insist, is based largely on the vast quantities of information and its speedy flow. That may well be true, but allowing such an explanation to function as a rationalization is morally dangerous. As a result, we continue doing our small part to report and analyze all that offends the dignity of human beings and humankind.
In east28, Farian Sabahi interviews Iranian writer Azar Nafisi,author of "Reading Lolita in Tehran," about her new book about her family. Boris Dubin provides a potent analysis of Russian mediatrends. Monika Bulaj meanwhile gives us a starkly beautiful photo essay about the Central Asian state of Tajikistan. Polish reporter Wojciech Jagielski gives insight into what ahead for Afghanistan. Our Dossiertakes up changes to the world's political and economic balance in wake of international financial crisis. It contains centerpiece essays by Luca Vinciguerra and Marco Maderno, each one attempting to put Indian and Chinese strategic movesinto perspective. The theme of global governanceis also on our radar, following the fiasco at the Copenhagen Summit Climate. We have reports by Renato Ruggiero, Donato Speroni and Maurizio Testa. The model of Europe as designed by the Treaty of Lisbon is the subjec of Ulrike Guérot's first piece for east. Political scientist Guérot just joined the magazine's advisory committee.

This year, the European Union presents new faces and a retooled leadership structure. Its new president is Hermann von Rompuy, a Belgian, while Catherine Ashton has been assigned the post of foreign minister.

An interconnected world now faces the reality that the postwar "G" model, long a bastion for Western states, no longer reflects global realities. Strategic positioning has fundamentally changed and so-called 'variable geometry' is here to stay. The pressing challenge is to find forms of governance that respect the new pluralism. Europe’s influence stands to fade unless it learns to wear one face.

The Consequences of the Summit

The Copenhagen summit was a troubling failure. Rifts between nations at different stages of development created insuperable difficulties. Lobby pressure prevailed over logic. Looking ahead to the next climate summit in Mexico City, United Nations is now trying to bring fractious nations back together.  But first, they must agree to legally acknowledge the modest Copenhagen deal.