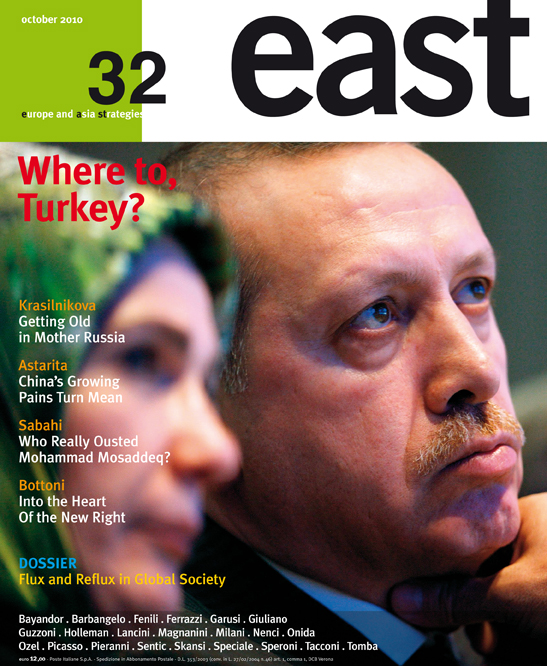 Where to, Turkey? The question forms the backbone of the report that leads this issue. Is the country headed toward Europe or instead falling back into Islam’s waiting embrace? If the latter, what kind of Islam will Turkey ultimately choose, the moderate interpretation embraced by incumbent Prime Minister Recep Erdogan or the more troubling Iranian or Pakistani model? The questions came up in diplomatic and mass media circles both before and after the Sept. 12 referendum, in which Turkey approved measures intended to bring it closer to the European Union. In the clearheaded view of Turkish political analyst Soli Ozel that we publish on these pages, Western fretting lacks foundation. For Ozel, Turkey is in an expansionist phase, growing three times faster than its European counterparts. Its policies reflect a desire to carve out regional self-determination with the goal of becoming an effective power broker able to negotiate both with the West and the Middle East, specifically Iran. Whether Turkey succeeds will depend in part on how other global actors respond, particularly those in Europe. This issue also addresses another theme of potentially historic importance, namely the growth of strikesin China. It goes without saying that the spread Chinese labor unrest, if unchecked, could haveuntold consequences on a world that depends on its exports.

Our Dossier probes the vicissitudes of global demographicsas the planet enters the second decade of the century. Though it’s not the first time we’ve taken up the theme, this time we widen the lens well beyond the here and the now. The question becomes what to expect over the next 40 years. Some of the predictions are alarming. This issue also features a report by Matteo Tacconi,who examines Afghanistan’s growing opium problem,while Antonio Picasso examines the delicate role of Egypt’s Coptic Christian minority. Finally, a correction. In the text that accompanied Monika Bulaj’s photo essay on her travels in Afghanistan, we made mention of Persia fighting Shiite warriors.
In fact, the Shiite movement didn’t exist at the time of the Achaemenid Empire led byDarius the Great. We meant the Scythians. Our apologies.

It's been a year since Greece's incoming Socialist finance minister publicly announced that the country’s deficit was twice the size of what the previous conservative government had predicted, namely 12 percent of GDP, with a debt of 120 percent of GDP. The announcement sent an uneasy ripple effect through European financial markets and triggered a feverish debate about the sustainability of the euro. Suddenly, the European economic and monetary union seemed like a daunting obstacle course.

Into the Heart of the New Right

Rightist parties posted major gains in recent Eastern European elections, with Poland, the Czech Republic, Slovakia, Hungary, Romania and Bulgaria leading the way. But just what does the new eastern right stand for? Aclose look reveals people who still associate the left with Communist inefficiency and a broken-down spoils system.  As a result, rightists seem moderate, if not progressive, something the European Union still refuses to see.

Serb Srdjan Sentic agreed to join the Kosovo government of Prime Minister Hashim Thaci as aspecial adviser, hoping to reduce tensions in the aftermath of Kosovo's 2008 independence. So far,both sides have resisted him. Serbs label him a traitor while Albanians are uneasy with his ethnic roots. Notwithstanding the hostility, he continues to work to bring the edgy communities together, putting defiant optimism ahead of all else.

Two years after the global economic slowdown brought havoc to Central and Eastern Europe, the International Monetary Fund is back to renegotiate aid packages issued at the time. Most of the region's strapped states have bounced back, with some in better economic shape than their Western counterparts. The upturn has led some governments to reject the IMF’s latest aid terms, which gets to the heart of the tense ties between established lending organizations and smaller states that are still reluctant to cut public spending.