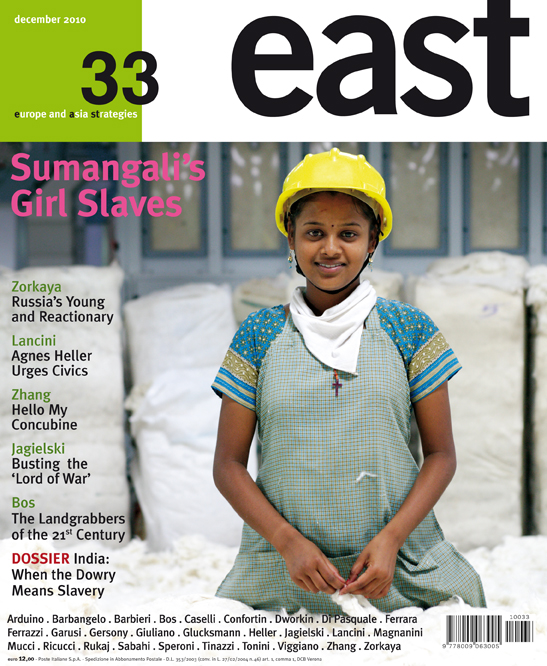 Readers of east know that unlike many media outlets we document the road less traveled. We’ve always taken a critical approach to probing the stains on the carpet of the globalized map. We’ve tried to put intelligence and reason ahead of gut responses. But some situations tax even the heartiest sobriety. Consider the female teens forced into bonded labor, a practice known as the sumangali system, in southern India.
Though illegal since 1961, traditional dowry protocols remain powerful. Relatives of the bride must turn over cash to the bridegroom’s family ahead of a wedding. In small villages, most poor families can’t raise the needed money. As a result, young women are often forced to work in urban textile mills, sucked into the rigors of “sumangali” (the word means marriage in Tamil). The women or their parents reach a three-year deal with their employer in which a portion of their earnings is deducted for use as a dowry. They money is then turned over to their parents. During the three years, the mostly preteen girls work in what amounts to labor camp conditions. Those who endure receive a lump sum of between 500 and 800. But many go home in poor health, all but destroying their ability to marry, let alone lead normal lives.
Union representation is rare, despite Indian law. In many respects, “sumangali” is a feudal reminder of a time when women had no rights. But those who use the system also furnish goods to major Western outlets, including C&A, H&M, Gap and Decathlon. We asked photojournalist Alessandro Brasile to get to the heart of the matter, and he complied, painfully.
Continuing on the theme of human rights, we also focus on the anniversary of the Tiananmen Square protests , which includes a parallel report by Rita Barbieri on Chinese dissident Liu Xiaobo, who was awarded the 2010 Nobel Peace Prize. Chinese author and journalist Lijia Zhang makes her first appearance on our pages with a look at the “ernai” phenomenon, tantamount to the modern-day concubine.
Finally, we speak to two major figures in 20 -century philosophy, the Hungarian thinker Agnes Heller, interviewed by Francesca Lancini, and Frenchmen André Glucksmann, who chatted with Alessandra Garusi.

Earlier this year the European Union warned Sri Lanka that someof the trading privileges it enjoys with Europe might be suspended as a result of human rights violations. If the EU hoped the admonishment might influence the Sri Lankan government, it soon discovered otherwise.

The awarding of the Nobel Peace Prize to imprisoned Chinese dissident Liu Xiaobo represented both an admonishment and a provocative effort to tell Beijing that being a global player means playing by democratic rules. Yet China has been down this road before. The West tried bringing it into line following the brutal Tiananmen Square crackdown in 1989. The fact is that the Chinese just don’t like being told what to do.

More than half-a-century after the Communist Party stamped out concubines, China’s wealthy newcomers have revived the practice under a slightly different guise. Thousands of young Chinese women are ‘ernai,’ or professional mistresses. . Most are trying to make ends meet or further their careers. For the ‘lucky’ ones, being a kept woman can mean a  luxurious life. But compromises come with the territory.

China and the Nation-State Comeback

In 1996, Japanese management strategist Kenichi Ohmae called nation-states outdated models in world without borders. It seemed like a death sentence. But big government China is putting his assertion to the test. It has made “soft” inroads in Asia and Africa and now has geopolitical designs on Central Asia, the Indian border, and the South China Sea. Everything about expansionist Chinese policy would suggest the old school nation-state is more vibrant than ever.