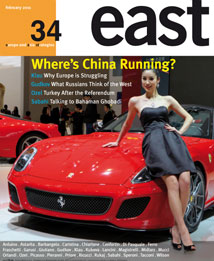 Moscow's Levada Institute, which is run by Lev Gudkov,has over the years provided a treasure trove of vitals statistics regarding Russian trends, most published exclusively in east.
The trend continues in this issue, which sees Levada focus its attention on how the world of the former Soviet Union perceives the 21st century West. Though some of the results are predictable, if not clichéd (considered myth-induced views of Western efficiency), what's striking instead is the widespread resentment, even among youth. Many Russians apparently consider themselves unjustly penalized by their own backwardness, as if it the condition had been imposed by foreign conspirators.

Our Dossier focuses on China. Though examining China has become something of hackneyed theme, the intent here is specific and three-fold. First, to examine the country's economy; second, its educational system; and finally, relations with Taiwan, which Beijing still seeks to incorporate. Writers Stefano Chiarlone, Claudia Astarita and Simone Pieranni examine China in the context of those issues.
On the economics front, Fabio Mucci and Roberta Priore probe the state of Eastern European businesses in the long shadow of the sub-prime mortgage crisis.
This issue is especially rich in hands-on reporting. Italian TV journalist Amedeo Ricucci reflects on the role hotels have played in the lives of foreign correspondents over the decades. Matteo Tacconi takes a look at how Istanbul was perceived by two notable Italian writers, Edmondo De Amicis and Corrado Alvaro, who visited it in the 19th and early 20 centuries, respectively.
Finally, we offer two photo essays, each one different in scope. Donatella Caristina's images help illuminate Russia in winter, with a companion piece by Cristina Giuliano, who reflects on the literary history of Mother Russia. Giorgio Magistrelli, in turn, offers a poignant portrait of children in the Chinese region of Xinjiang. His images close out a Dossier whose attention is trained less on folklore than on humanity.

The eurozone sovereign debt crisis that is transforming the politicsof Europe throws up a threefold challenge. The crisis tests the possibility to sustain a successful European currency union on the basis of rule-based but essentially voluntary macroeconomic cooperation of its constituent member states.

The Western Myth And Russian Identity

For centuries, Russia has persisted in a love-hate relationship with the West. What began with envy was cruelly transformed into resentment. As Soviet Union fell apart, Russia seemed poised to embrace the enlightened, democratic thinking has always seemed to crave. . But the economic crisis of the 1990s corrupted the trend, with nationalists and former members of the Soviet apparatus, including a president, reminding Russians that they had everything to fear and nothing to gain by looking outside the Motherland for their values.

Modern Russia is modern in name alone. Its rich tradition of literature and fables is the sum of a poetic panorama expressed through century-old myths of heroes and demons. Long a nation of visionaries and madmen, Russia is perhaps best seen through photographs that try to capture its essence.