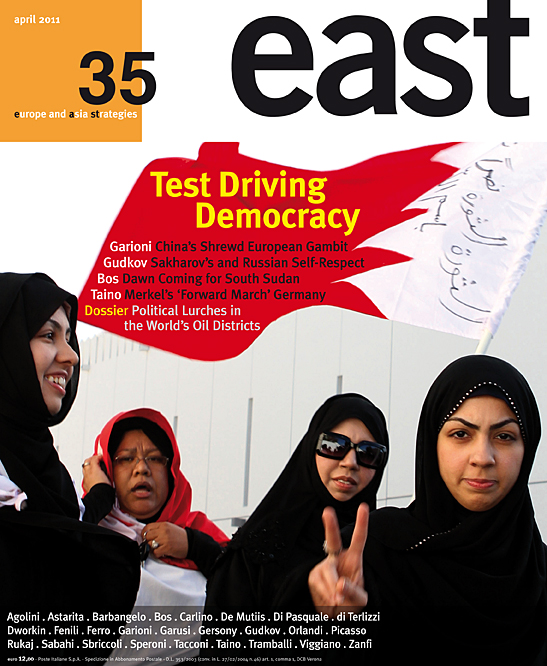 We close this issue without knowing what the unfolding warin Libya will yield. But we couldn’t fail to take note of the profound changes occurring in the southern Mediterranean. We askedjournalists who know the region to reflect on the significance of the events so far and to speculate as best they could on the future. Only time will tell if they were on the mark.
In that vein, cordial thanks to “Sole24Ore” correspondent Ugo Tramballi for his insights. His reflection on the wider significance of events in North African and the Middle East opens our Dossier section. Thanks are also due to Anthony Dworkin of the European Council on Foreign Relations, who attempts to track the European political response in the midst of the upheaval. On the economic side, Luca Angolino and Carmela di Terlizzi of Prometeia offer their insights, along with Elena Fenili of the UniCredit group.
We’re also indebted to Ludovico Carlino for his appraisal of the threat posed by Islamic extremism in Yemen, to Antonio Picasso for his analysis of the brutally unsettled ties between Egyptian Muslims and the Coptic community, and to Farian Sabahi, who interviewed writer and magazine editor Joumana Haddad on the matter of women’s rights in the region.
In addition to our usual look at China, Russia and India, we include two additional reports of special interest, Riccardo De Mutiis’s examination of Montenegro, long trapped between a deep desire to Europeanize and the persistence of organized crime, and Emilano Bos’s detailed look at South Sudan, an African state on schedule for “birth” in July.
On the cultural front, Claudia Astarita probes the enduring legacy of the Chinese Cultural Revolution, Marina Gersony profiles Lativian-Italian writer Marina Jarre, and Federico Zanfi examines the troubled landscape of Tirana, Albania’s chaotic capital.
Finally, please welcome Danilo Taino into our fold of writers. He is the Berlin correspondent of the Milan daily “Corriere della Sera.”

If even the renowned German philosopher and sociologist Jürgen Habermassays that his country is “a giant focused only on itself,” the time has probably come to ask the mother of all questions, at least from the European perspective.

Finland has finally outgrown its Russian connection and evolved into a thriving, advanced democracy that prizes women in fundamental leadership positions and looks to make living conditions for its children among the best in the world. At the same time, the country struggles when it comes to opening the door to would-be immigrants and still faces a deep and dark demon that won’t go away: alcohol abuse.

Andrei Sakharov, the nuclear physicist, dissident and human rights activist who died in 1989 is still viewed by many Russians as the epitome of personal morality. He advocated civil liberties and reforms, enduring exile and persecution after winning the 1975 Nobel Peace Prize. But his actions never seemed motivated by ego or secret deference to vested interests. This pureness of intent, the action of a man who spoke his mind no matter what, is seen by some as naïve and others as saint-like, but all still prize it.

Have contributed to this issue: