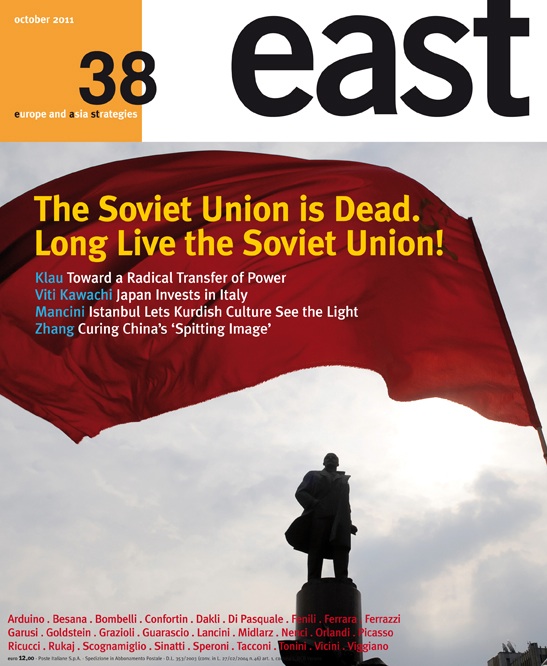 It's far too early to take definitive stock of the outcome of the political and social processes triggered by the fall of the Soviet Union.  Many Soviet republics are independent states whose political landscape is in flux. There’s no final word on their futures. In September, pro-Russian parties won out in Lithuanian elections. Meanwhile, Russia’s own situation is also fluid, as the many Levada Institute studies published in “east” continue to show. The substance of the relationship between Prime Minister Vladimir Putin and President Dmitri Medvedev poised for a role reversal next year, remains uncertain, as we pointed out at length in our last issue.
But the longer Russian indecision reigns, the more likely the ambiguity will favor an increased role by Moscow. Whether Russia actually wants to return to vestiges of its Soviet past is an open question, but keeping an analytical eye open is an essential task. Our Dossierdoes just that, and includes reports from esteemed academic observers Fernando Orlandiand Piero Sinatti as well as a group of insightful reporters, among them Astridt Dakhli,Francesco Guarascio,Alessandra Garusi, Massimiliano Di Pasquale,Antonella Viciniand Stefano Grazioli. On the pressing issue of sovereign debt crises and the euro, we publish an opinion pieceby Thomas Klau,who heads the Paris office of European Council on Foreign Relations. Special thanks are due to Donato Speroni,who provides a fascinating update on global demographic trends,whose changes will influence the future of global leadership.

Greek Finance Minister Evangelos Venizelos smiles following press conference in Athens in July 2011. Eurozone leaders and private creditors are participating in !159-billion bailout to prevent the country from default and help rein in the euro crisis.

The future of the North African and Middle Eastern states most touched by revolt remains uncertain. Egypt and Tunisia await democratic guidance, with skeptics doubting it will come any time soon.

Though Muslim Tunisia was always proud of its secular status, Islam had made its presence felt in the months following the January ouster of President President Zine al-Abedine Ben Ali.