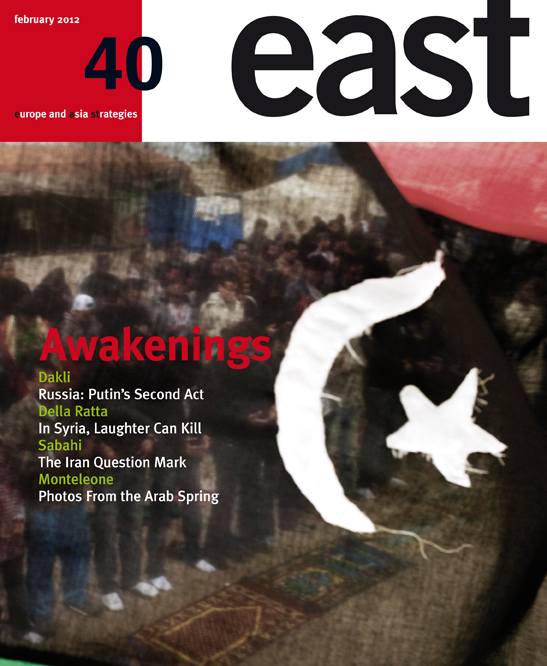 A close look at the first 40 issues of “east” shows the extent of the  transformation that’s occurred in the countries of greatest interest to our magazine. China, India, Russia, Turkey,  and Eastern Europe: Just about every geographical area in our purview has  witnessed dramatic change in recent years, most of which has had an effect
on Italy and its neighbors.
“East” has also changed. With this issue comes a leaner, tighter look, but one  that’s richer than ever in in-depth reports and columns intended to better illustrate  the workings of the world in which we live, including its evolution and crises.
The year 2012 offers a dense political agenda, including Russia’s presidential  elections in March, which comes as Vladimir Putin rethinks his political priorities.  In China, there’s the 18th Communist Party Congress in autumn, likely to usher  in fundamental leadership changes. In November, the United States goes  to the polls in an election that will rivet world attention.
In addition, major transitions are afoot in North Africa and the Middle East, in the midst of its own democratic reawakening.
This issue’s Dossieris dedicated to the so-called Arab Spring, a year after they exploded onto the scene.
We focus on the impact their impact on the affected nations as well as on other players in the Muslim world.
If mass media covered those daily events in real time, we instead dig into events that are emblematic of change. Paola Caridi  examines the life and times of Egyptian blogger Alaa Abdel Fattah; Giuliana Sgrena studies the role Tunisian women played  in the uprising that brought down President Zine El Abidine Ben Ali; Amadeo Ricuzzi and Stefano Tinazzi probe the complex  mosaic of Libyan militias in the aftermath of that country’s brutal civil war; finally, Donatella Della Ratta looks into Syrian revolt  in terms of the role being played by its artistic, web-wise youth.
A report by Marta Ottaviani examines today’s Turkey, which is emerging as a model for new Muslim democracies,
notwithstanding its ongoing domestic controversies. We also focus on Iran, with Farian Sabahi investigating that country’s
response to increasing Western pressure. We also published the account of the daily life of a college student in Tehran,
written under a pseudonym. It affords extraordinary insight into the uncertainty and hope shared by Iranian youth. In addition,  our writers recommend books that might be useful should you want to dig deeper into issues raised in our Dossier section.
Davide Monteleone, an Italian photographer and the winner of four World Press Photo, furnishes our photo essay
and the cover images. All are dedicated to the Arab Spring and the regional events that have followed in their wake.
Our column lineup is as rich as ever. There’s “Western Shore,” compiled by Roberto Santaniello, and its “Eastern Shore”
counterpart, assembled by Stefano Bottoni. Other reports range far and wide, including Manuela Dviri’s heard-on-the-street
reflection on Tel Aviv; a statistical examination of Russian dissent compiled by Moscow’s Levada Center; as well as our regular  features, Francesca Lanciani’s “That’s Incredible” and Carlotta Magnanini’s “By the Numbers".
In our Special Report section,
we look at Kosovo four years after the war; the “thin red Durand line” between Pakistan and Afghanistan; and the situation
in Kashmir, still contested between India and Pakistan. Giuseppe Scognamiglio rewards readers with fascinating reflections
on the state of European democracy as the euro crisis continues.
Speaking of change, we want to extend heartfelt thanks to Vittorio Borelli, founder and editor of the magazine,
for all his work over the years. From this issue on, Maria Cuffaro will help us serve your needs by paying close attention
to events in the complex world around us.

Freedom is sweet.” Mahmoud, a journalist in his fifties, utters these words while displaying a toothless grin and a childlike smile. amounts to a patchwork of warring militias. I met him a year ago during a CGTunion march on Avenue Bourguiba in Tunisi.

Too often in recent months, key decisions on vital EUeconomic needs have been influenced by domestic electoral agendas.

Fraud and vote-rigging protests in December have shaken the Russian political landscape. While Vladimir Putin is still considered the presidential favorite, it seems clear he’ll have to change his tune to win over an increasingly hostile electorate that no longer perceives him as a national savior and has little or no affection for his bloated United Russia Party.

A Restless December .Since hotly-contested parliamentary elections, the mood in Russia has been uneasy. While Vladimir
Putin is still widely expected to win the March presidential vote, many are convinced the unexpected December protest movement may have put his policies on notice.

Bucharest and the Capitalist Rush

Romania’s capital, like many of its Eastern European counterparts, has endured and interpreted the rush to privatize and rebuild. The result is a vibrant capital that includes 19thcentury architectural masterpieces gargantuan Communist-era buildings, and 21st century malls.

The EU:Yesterday, Today and Tomorrow.

The Inalienability of Being Free

Thirty-year-old Alaa Abdel Fattah is considered akey player in the year-old events of Tahrir Square.
He comes from a family of dissidents that challenged the regime at every turn.

In Syria, Laughter Can Kill

While protestors continue taking to the streets to protest the regime of President Bashar al-Assad, many artists have turned to making and disseminating video parody that aims to turn government propaganda on end.

Months after the overthrow of strongman Moammar Qaddafi, unstable Libya appears to be in the clutches of competing militias, each one attempting to put its stamp on the country. As a result, civil war remains a possibility.

Tunisia Leaves its Women Behind

The Arab Spring began in Tunisia, with women harboring high hopes for change in their status and social position. But the electoral success of the Islamist Ennahada Party has placed those hopes in jeopardy.

Relations between the United States and Iran haverarely been as frayed as they are now, with U.S.President Barack Obama seemingly determined to derail Tehran’s nuclear ambitions even if it means war.

A Day in Tehran. Though Iran’s relations with the West are deteriorating steadily, its youth contingent tries to get on with day-to-day life.

Turkey’s role in the Mediterranean and Middle East has been helped by its active role in Libya and now in strife-torn Syria. More than ever, Prime Minister Recep Tayyip Erdogan is seen as a key player in the region.

Arab Spring countries, many of them savaged by rioting, are slowly picking up the economic pieces. Some of them are turning to Europe to revive old deals.

The Many Arab Springs

Photo essay.  Sidi Bouzid, Tunisia, Jan. 17, 2011: It’s been a year since the death of Mohamed Bouazizi, the young Tunisian activist whose self-immolation served as a catalyst for the unprecedented popular revolts that began in this country and soon spread to neighboring North African and Middle East states.