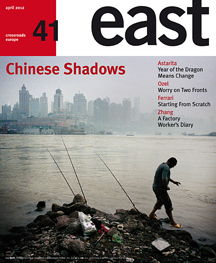 East41’s Dossier is titled Chinese Shadows. Each of its reports is directly tied to the complex life and times of the world’s second-largest economic power. We preview the coming Communist Party Congress and anticipate some of the major changes expected at the top, predictable but still intriguing. We also examine economic growth and investment, focusing on the country’s riveting array of contradictions and social contrasts.
Claudia Astarita gives readers an exhaustive look at impending changes within the secretive Chinese executive, while Antonio Barbangelo probes China’s widening portfolio of foreign investments. Francesco Sisco examines Beijing’s ties with Europe while Simone Pieranni takes a detailed look at the cultural reform through which China hopes to influence the world as a whole, exporting parts of its own vision elsewhere.
The problematic situation faced by Chinese workers is ably and amply covered by a report produced for us by the “China Labour Bulletin,” beside which you’ll find an autobiographical account by author Lijia Zhang that offers fascinating (and amusing) insight into what it was like working in Communist China of the 1980s.
We also cover the ups and downs of ties between Russia and China in terms of energy policy and technical innovation, reports written by Astrit Dakli and Maria Elena Viggiano, respectively.
We close out the Dossier with a special report on Hong Kong by Francesco Guarascio, vividly illustrated by Alessandro Rizzi’s photos.
As always, we provide a reading list of book reviews for those of you eager to dig deeper into the subject matter.

The issue’s photo essay comes from Agenzia VII, which gives us a selection of images that portray modern China for what it is, a county that embraces the modern while adhering to tradition, at once embracing wealth and poverty, openness and censorship.
Europe is also on our mind. Giuseppe Scognamiglio reflects on the euro crisis as a means toward continental reinforcement; Antonio Ferrari and Constanze Reuscher tackle Greek crisis from the vantage points of Athens and Berlin; Stefano Bottoni probes the uneasy relationship between Hungary and the EU.
Our columns are rich as always. Together, Roberto Santaniello’s “Western Shore” and Bottoni’s “Eastern Shore” bring you up to date on political affairs throughout Europe. You’ll also find Manuela Dviri’s “Tel Aviv Notes” and the Levada Center’s insights into Russian affairs, as well as two regulars: “That’s Incredible,” compiled by Francesca Lancini and Carlotta Magnanini’s “By the Numbers.”
This issue’s Special Reports covers Bosnia, divided as it is by ethnic woes; Turkmenistan and its appetizingly immense Central Asian gas reserves; and Qatar, which is pressing for a wider diplomatic role in the Middle East.
Finally, we recommend Paola Caridi’s fascinating look at the growth of graffiti and wall art throughout the Middle East since last year’s Arab Spring.

"It doesn’t matter if a cat is black or white,” China’s Deng Xiaping was fond of remarking, “so long as it catches mice.” This was Deng’s way of describing the oxymoronic prospect of a socialist market economy, which seemed like a pipe dream in his early days. In 1989, Deng was president of the Communist Party’s military commission. The country was a vast peasant country. No one was rich. There were no capitalists.

The Europe of the Future

If the euro is to survive and flourish, the EUmust begin a two-year plan calls for profound changes to institutional architecture and greater integration of economic and fiscal policies.

Fooled into thinking it could spend far more than it ever had, humbled Greece now has no choice but to begin a slow rebuilding process. In addition to bailout funds, it also needs help in leaning to believe in itself.

In Germany, Greece is the Word

Despite internal turmoil that has included the resignation of a president, Berlin seems focused on Greece alone. While tabloids assail Chancellor Angela Merkel for making exaggerated concessions, few leading Germans see a more practical way out of the euro crisis than the path she’s chosen.

The European Union recently approved the so-called “Fiscal Compact” by which 25 member states agreed to introduce a national requirement to calling for balance budgets, with agreed upon fines for states that fail to hold up their end.

Nearly 20 years after Dayton Accords, Bosnia remains stuck in a political and ethnic stalemate. In Sarajevo, museums are closing for lack of funding. In Mostar, communities live apart. The result is a country on the verge of a nervous breakdown.

Ambitious Ankara is eager to bring the West back to the bargaining table with Iran to avert what could be a catastrophic military engagement. At the same time, it has its hands full dealing with the Syrian calamity, which is closer to home and shows no signs of stabilizing.

Vladimir Putin may have won the Russian presidential election but the real winners were opposed of his regime, whose number are steadily growing and are now estimated at 35 percent.

Gay Hurdles. Though homosexuality was decriminalized in Russia two decades ago, anti-gay legislation is making a rapid comeback, with St Petersburg becoming the latest city to ban “homosexual propaganda.

President Hu Jintao and Prime Minister Wen Jiabao are set to leave office in October following the 18th Communist Party Congress. While their successors have been agreed upon, a behind-the-curtains struggle rages.

Going Outside to Build Within

Slowed by the global crisis, China has again begun investing heavily abroad. Its interest in Africa and Latin America has widened to include Europe.

China is spending billions to improve its high-tech industry and limit reliance on foreign innovation.
So far, the effort has produced only modest results. Beijing’s response has been to spend even more, a pattern that shows no signs of abating.

Though Russia and China have improved their ties thanks to Beijing’s need for nearby energy resources, some of the deals are beginning to fray at the edges. Moscow wants more customers while China is diversifying its suppliers. In the end, it’s a
dance for Central Asian supremacy.

China has long sought greater influence in Europe. But the recent crisis within the European Union has
made Beijing wary of making EU commitments. When it looks towardEurope, it sees precisely the kind of chaos it most fears.

A Decade of Change; A Study of Chinese Workers

The author recalls her tumultuous, troubling and literally ‘hair-raising’10-year adventure as an employee of a 1980s Chinese missile factory on the banks of the Yangtze, where the slightest resistance was considered a form of insubordination.

China is deeply aware of the “Yellow Peril”-style stereotypes that have long been associated with its people, its culture, and its global aims. As a result, Beijing officials are now working more actively than ever to make international perceptions of China more realistic and open-minded.