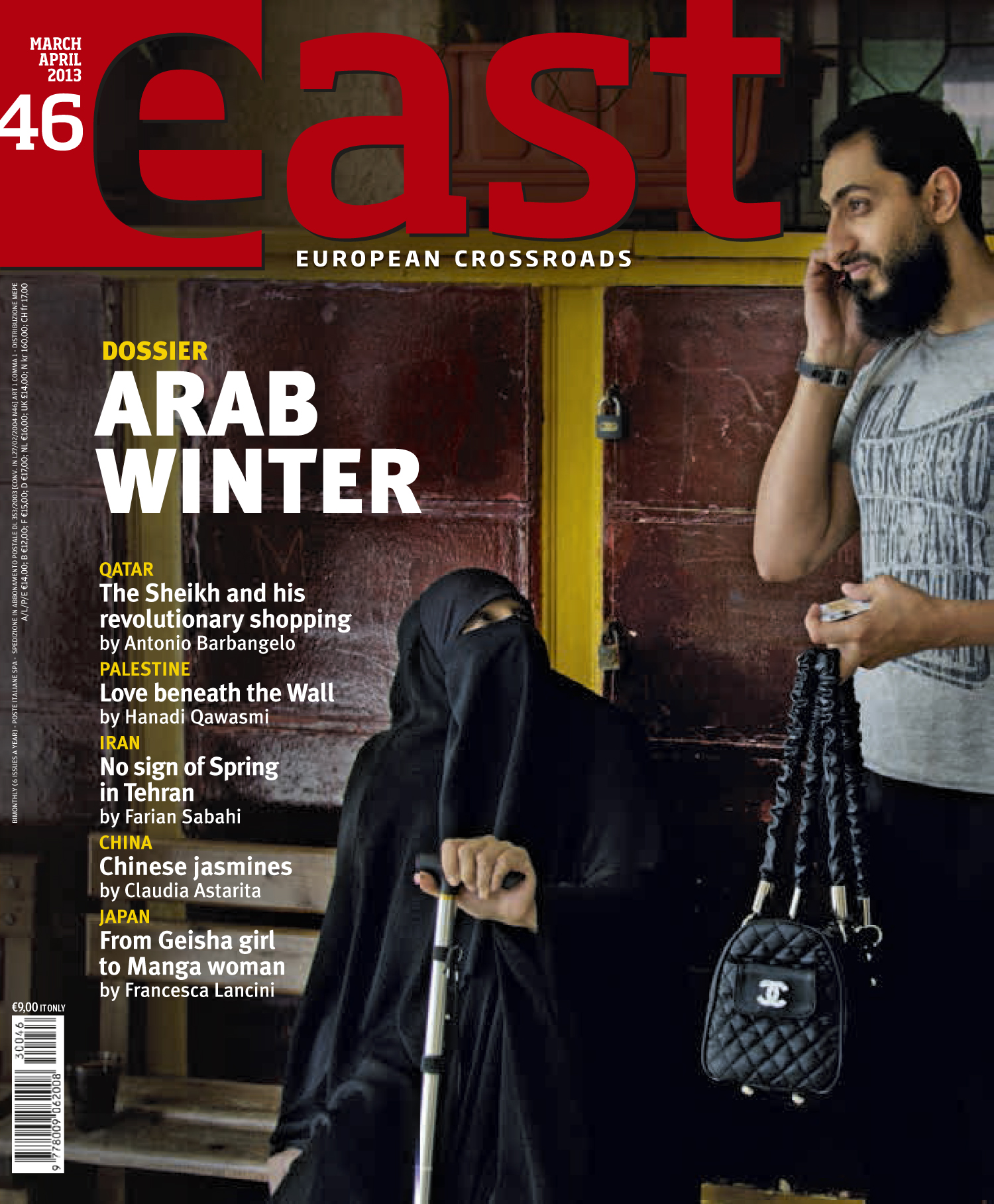 Arab Winter is the title of east No.46, available in newsagents, online and from the apple-store from today, the 1st of March.

This new issue of east is the first of the new version of the magazine with its novel graphic and editorial approach. East starts off the year with a Report on the repercussions of the Arab Spring on certain Middle Eastern countries: Tunisia, Morocco, Libya, Egypt, Qatar, Syria and Iran.
The Dossier features articles by important Italian and international commentators who provide a detailed and well-documented analysis of the achievements, disappointments and issues raised by the Middle Eastern revolts which began in 2011.

These countries are described through firsthand accounts, essays and articles which focus on various aspects of the different countries, with further food for thought provided by a Cultural Notebook connected to the Report which discusses Film, Poetry, Literature and the Visual Arts.

Beside the Report, other articles in the magazine discuss: ‘Chinese Dealings’, an interesting analysis of the Chinese approach to business; ‘The Gold Rush’, on a new generation of panhandlers getting involved in Australian gold mining; ‘From Geisha girl to Manga woman’, takes a look at Japanese society in the wake of the tsunami and ‘From Gangnam to Brussels’, how the Gangnam Style is now conquering Europe.

In a smart district of Cairo they've now opened the first café for traditional Muslims. Elegant tan armchairs welcome veiled women and their creamy cappuccinos (now the rage among upper middle class
Egyptians) while men can chat among themselves in an adjacent room. Families and children have yet another area all to themselves. Unmarried couples are not allowed. Such a place would have been unthinkable a year ago.

No Europe, thanks, we’re British

The relationship between the United Kingdom and Europe has always been fraught. As with all long marriages, there are bound to be rough patches and responsibility has to be shared: through some may have put more effort and shown more patience in attempting to consolidate the relationship. But there comes a time...

HIDE AND SEEK
George Orwell's ubiquitous Big Brother never truly materialised in 1984. But a new intrusive eye – similar to the one imagined by the British author – has started to concern civil liberties activists in Europe.

Hollande: backpedalling all the way

Hollande is moving ahead very slowly. "Change is now" was his electoral slogan, but the impact of problems currently afflicting France is dampening his initial enthusiasm.

From Gangnam to Brussels

There's a wish for liberalisation between Asia and Europe. Removal of customs tariffs? A desirable solution for the majority. But there may even be technological solutions that can surpass traditional economic recipes.

Peer Steinbrück may not be up to the task: the newspapers say he's too much of a snob, his own party members say he's lost every election he's run for. And yet he's the SPD candidate and has the backing of party grandees like Helmut Schmidt.

The many identities of a Cossack

A warrior people, once at the service of Great Mother Russia, the Cossacks of today are hoping to revive their old fighting spirit. They don't drink, they don't do drugs, they invest in education and physical fitness. Now they are to be employed in state-run services for antiterrorism operations and humanitarian actions.

The strange case of citizenship without a country

European citizenship is the first instance of citizenship not tied to a place, state or country. For the time being, a EU passport is only a utopian idea, yet the citizens of the 27 member states enjoy the privileges and comply with the rules decided in Brussels.

Putin's crown jewel is called Gazprom, the world's biggest extractor of natural gas, which has constructed Nord Stream, a pipeline supplying gas to the whole of Europe, running under the Baltic Sea for over 1000 kilometres from the Russian city of Vyborg to Greifswald in Germany.

The good side to Europe

To mark the twentieth anniversary of European Union Citizenship, 2013 has been designated European Year of Citizens. But public disaffection with the EU is constantly growing. It is true that the European Union's constructionis incomplete as yet, but it still offers opportunities: it's up to each and every one of us to seize them.

Turkey is engaged in a major international gambit. All eyes are on Erdogan's next moves, hemmed in by Syrian refugees and Kurd rebels.

From Egypt, eight portraits of common people. Their past and present life, their dreams after the Tahrir square revolution.

The double standards of the Party of God

Much of Morocco's wealth is concentrated in the hands of the royal family and an exclusive elite. Yet one of the country's paradoxes is that, despite everything, the monarchy enjoys a good reputation, in the West and at home. Its political longevity seems to stem from an ability to contain discontent through a 'top-down' reform process, closely supervised by the king.

The new Libya without Qadhafi must now rebuild credible infrastructures. Its laws need rewriting with an eye to the kind of country one intends to build. At the moment security is lacking, the militias are still armed and a lay state is still just an idea.

The plagues of Egypt

The Egyptian president would like to be known as a democrat but is being held in check by his supporters. He, like Mubarak before him, has also been dubbed the "new Pharaoh".

Revolution on the run

Seoud, the fastest man in the Middle East, runs towards Beijing and then London. But stops off in Tahrir Square, dreaming of revolution and democracy.

The Sheikh and his revolutionary shopping

Qatar is stepping up its economic offensive in the Arab Spring countries. It targets banks, infrastructure and tourism. The two main players are the QIA sovereign wealth fund and the Qatar National Bank, but all the Gulf's Sunni monarchies are focusing on North Africa whilst Europe makes little headway in the region.