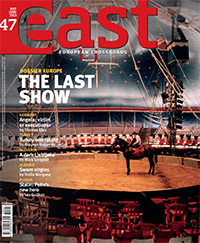 The Last Show is the title of EAST 47, available at newsagents, pdf and on apple-store from the 1st of May 2013.

The Last Show is also the title of the focus report on Europe, near and far, the known and lesser known sides. From the Dangerous Games in Brussels and Frankfurt to the Sworn Virgins of Albania, the God of Managers and the Romani Princesses for sale. As we are reminded by Renato Ruggiero and Giuseppe Scognamiglio in their editorial, Europe's more than just Euros while the Brussels Notebook takes a look at the rules of the game.

From Russia to Cyprus, Ireland to Turkey, Spain to Slovenia, Greece to Hungary… Europe’s seen through eye witness accounts, analyses, reports, voices from within and portraits of today. And as always the exclusive Europeye Research Team Country Indicators together with the wordless satire by Mana Neyestani.

Europe also viewed through its architecture, music and film thanks to the Cultural Notebook, followed by a journey Out of this World: the Chinese Empire, The Eastern Christians and the controversial rare earths.

EAST 47 awaits you on newstands and from the 8th of May in bookshops as well.

Do we have Mario Monti or Mario Draghi to thank for the lower spread? Can we keep on living happily ever after with a 300-point differential over the German Bund? Is our European and euro membership an advantage or a disadvantage? Coming up with a few timely answers to these questions that have been spicing up the political debate in Italy.

Iannis has blue eyes like the Venetians who colonised Cyprus in the 15th century, whereas his dark skin is reminiscent of later invasions. “What’s Europe?” he asks himself philosophically, while sitting at the bar drinking Greek coffee. “Do we have European passport? We don’t have a common European language, we have at least twenty of them. The only thing we share is the euro”.

Chancellor Merkel is not among the most fanatical supporters of the severe austerity measures imposed on countries in difficulty, yet
she has come to represent them. Her caricature is paraded in protest marches. In an impersonal Europe, Merkel personifies the crisis.

The hit parades, the best selling music charts, provide an increasingly less reliable snapshot – partly due to uncontrolled downloading from the internet – of average musical tastes and the top pop song in every country. In the case of Europe, half the countries provide proof that the shift to globalisation has not been too traumatic.

Not only in Greece, but also in Spain and Portugal the film industry is experiencing a moment of explosive creativity. The unease and uncertainty seem to be channelled into a form of “filmic cubism”, a nouvelle vague spawned by the crisis.

ATTEMPTS AT ELECTORAL CAMPAIGNING The direct election of the EU President of the Commission, without modifying the EU treaties, would be a veritable revolution – and is now a possible one.

Since the near collapse of the global economy no single category has had to weather the brunt of public hatred more than the banks. The joint decision reached with the EU institutions to clamp down on banker’s bonuses is hardly surprising but it could have side effects.

Cameron’s Great Britain opposes European integration, refuses entry to the eurozone and insists on different immigration and visa laws, but for how long will it manage to hold on to its diversity and at what cost?

In order to obtain the same rights as men, Albanian women take a vow of chastity, a tribal practice that still lives on in mountain communities. Forsaking sex grants women the right to inherit property, smoke in public and travel. In a family without men, a woman can become the head of the household and enjoy the same authority as a man.

Iosif Stalin died sixty years ago, on 5 March 1953; he was one of the most fearsome dictators in human history. In Russia, as the date approaches, fresh and lively discussions about Stalin’s legacy are taking place along with a poorly disguised attempt to rehabilitate him. Of course Putin is behind this move, accusing the West of planning the earlier dissolution of the USSR.

With the collapse of communism, the only thing holding the Russian Federation together is oil; but the regions rich in oil and gas are now lured by ideas of independence, and Moscow fears reprisals from those who’ve been forced to submit to iron Soviet rule for so many years.

For Kurds March 21st is a national holiday, it announces the arrival of Spring, a festival of awakening. Abdullah Öcalan chose the Nowruz festival to announce the cease fire and invite PKK militants to leave Turkey and return to the their fields in Iran and Iraq. Peace between Turks and Kurds is the successful outcome of the secret talks Erdogan has been holding for years.

They are young, virgin and for sale. The market is held in Bulgaria in spring. Prices ranges from 1500 euro upwards. For the event the
girls wear their Sunday best and dance merrily under the watchful gaze of the potential buyers.

God of managers, God of prophets

Since the death of God, religion has been doing very well. The uncertainty is: it’s spelt “religion”, but how do you pronounce it?

The economic crisis is rekindling migratory movements, but this time the immigrants leave countries like Italy, Spain or Greece to head north or go back home. “Many Chinese people are returning home”, says a restaurant owner who’s been in Italy for 21 years. “There’s no work”. In four years, the number of immigrant arrivals in Italy has dropped by over 75%.

Rete G2 Seconde Generazioni is a national organisation run by the sons of immigrants who were born or reached Italy as small children. They define themselves as sons of immigrants, not immigrants: the ones born in Italy have never experienced a migration, and those who were born abroad but brought up in Italy did not emigrate, they were brought to Italy by their parents.

Italy and the unbearable lightness of politics

In Italy, life is often faced lightheartedly; dramas and problems are handled as if they were comedies. This is a very disconcerting attitude for people from the severe northern regions, where the difference between drama and comedy is clear and unquestionable.

In Viktor Orban’s Hungary, support is growing for the anti-Semitic and anti-Egyptian far-right Jobbik party. Fascist gangs terrorise the Roma people, while the party’s ‘acceptable faces’ head for the European Parliament, teaming up with the British National Party and Le Pen’s National Front. Italy’s far-right grouping, Fiamma Tricolore, is also present, in anything but a minor role.