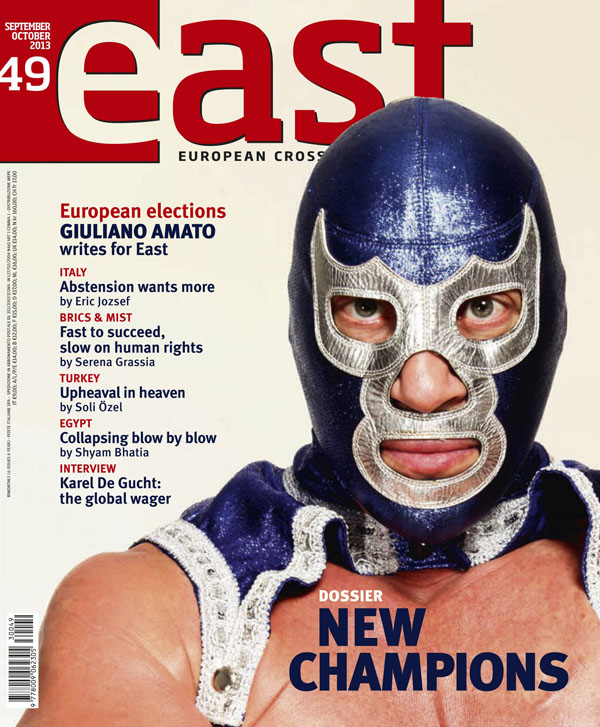 New champions is the title of east 49, available at newsagents, in pdf format or from Apple-stores from the 1st of September 2013.

Giuliano Amato explores potential ballot box dilemmas on the eve of the spring European: what new European Parliament can we expect?

New Champions is the title of the dossier focusing on the so called BRICS  countries, the club of emerging nations, and on the new MIST upstarts. The new champions are rich and poor, tough and fragile, a melting pot of social and political contradictions that are currently being displayed on the squares and streets in these countries.

It’s a global wager as we are told by the European Commission for Trade Karel De Gucht: Europe must move away from providing co-operation and start becoming a partner of the new champions that are now coming of age.

Middle East: Where Do We Go Now? is the question posed by Fadi Elhusseini and Shyam Bhatia faced with the recent Egyptian and Syrian events which seem to chronicle a failure… of democracy? suggests Mana Neyestani.

Even in Europe there are many turbulent issues: the referendums in the United Kingdom, the French disillusionment, Italian abstentionism, the State expropriations in Spain… What future for national democracies? asks Giuseppe Scognamiglio in his editorial. But the real revolution could hinge around 3D printers which might bring about a new industrial revolution and rewrite current consumption models and the balance of world power.

east 49 awaits you at newsagents and from September 4 in bookshops as well.

After ten years of porteño life in Buenos Aires, my friend Emiliano Guanella, a courageous Italian freelance journalist, has moved to Rio de Janeiro because, he says, “Brazil is where things happen”. In musical terms, it’s like switching from the swoon of the tango to the energy of the samba. But this summer, even the Brazilian samba turned into an angry capoeira: protests in 100 cities, dissent against the ‘futebol god’ and derisive slogans calling for “More bread, less games!”

No future for national democracies

The profound economic and social crisis doesn’t seem to be letting up on our continent. It has become a global storm that can only be weathered by taking decisive steps towards a federal Europe.
Not “less Europe”, but “more Europe”. Not euroscepticism, but – if possible – euro-enthusiasm. And the next European elections could provide a very important opportunity.

Brazil under no illusions

The organisation of the Football World Cup and the Olympics carries with it a history of debt, corruption and budgets that go through the roof. The only obvious positive effect is that after events of this kind, people are happier and more optimistic about the future.

According to Jerome Valcke, Secretary General of Fifa, for anyone engaged in organising an event like the world cup, democracy is a tough nut to crack: it would be much simpler if there was a little less of it. “I will say something which is crazy, but less democracy is sometimes better for organising a World Cup,” he admitted in April, “When you have a very strong head of state who can decide... that is easier for us organisers…”

A different type of bailout : only €10bn of the €17bn needed. The island’s future includes the gas fields off its southern shores and there has been talk of reunification between the Turkish north and Greek south. But everything hinges on relations between Ankara and the EU.

The latest warning signal came in June, when Fitch downgraded Cyprus’s local currency from ‘B’ to ‘B- with negative outlook’. According to the global credit ratings agency, the downgrade “reflects the elevated uncertainty around the outlook” of the Mediterranean country’s economy. The same doubts had been expressed two weeks earlier by the International Monetary Fund (IMF), in a report that predicted a deep recession in Cyprus in coming years “substantial risks still loom for the Cypriot economy”.

Shock and astonishment. The fall in participation at the last administrative elections in May caused widespread debate on the meaning of this attitude by the Italian electorate.

Afew political commentators and personalities have raised the umpteenth democratic
alarm in a country that has witnessed a number of anomalies in its recent past: a billionaire television magnate heading the government for most of the past 20 years and former comedian Beppe Grillo, who now leads his 5 Star Movement, the most voted single Italian party (excluding the votes of Italians living abroad).

East interviews Karel De Gucht, Belgian Foreign Minister between 2004 and 2009 and current European Commissioner for Trade in the Barroso Commission. He led of the VLD, the Flemish Liberal Democrat party from 1999 to 2004.

Indonesia is a blossoming economic power thanks to domestic consumption, productivity, services and telecommunications. Now it is set to become an economic giant in competition with Germany and the United Kingdom.

There’s often a tendency to link Indonesia to an image of a former self-governing Islamic regime, whereas some people merely regard it as a paradise of wonderful temples and beaches. Today, however, this vast South East Asian country—we should remember that Indonesia is the fifteenth biggest country in the world—is capable of offering much more: trading and financial opportunities, dynamic businesses in which to invest and an increasingly diversified production fabric.

The miracle of the Han River

“Gangnam Style”, the global chart-busting single by South Korean singer Psy, aptly embodies the phenomenal rise of a nation from being one of the world’s poorest countries to among one of the richest countries in the world and all in less than half a century. Glitzy, brash and proud of its global success.

Like Psy, a pop icon who we knew very little about before his song became an
international hit inspiring flash mobs across the planet, South Korea remains somewhat of an enigma to many in the west, often unaware that they have been enjoying the fruits of its miraculous industrial development. Samsung smartphones, Hyundai sedans and LG air conditioners have all become household ‘Made in South Korea’ products in Europe and America as well as in Asia, Africa and the Middle East. We have become so used to these South Korean goods that we barely notice or ponder over their origin.

For three weeks the small “Gezi park” located in the most important public square of Turkey’s most important and populous city was under occupation. In spite of massive amounts of pepper gas sprayed against them, steady clubbing and water hosing by the police,
the demonstrators stood their ground.

Dilma has to keep running

In December 2011, the Centre for Economics and Business Research made it official: Brazil had overtaken the U.K. Good news for Dilma Rousseff, exactly one year into her term as president. The U.K.’s recovery in 2012, Brazil’s disappointing growth in the first half of 2013, and recent street protests have made progress tougher.

Dilemmas in the ballot box

There are various expectations surrounding the European elections next spring. Higher levels of abstention could favour the anti-European vote. Which could result in populist movements contending, for the first time, the traditional parliamentary domination of the European People’s Party (EPP) and the Party of European Socialists (PES), with as yet unforeseeable consequences.

RIO DE JANEIRO - Two minutes of uninterrupted booing. That was the greeting for Brazilian Presidenta Dilma Rousseff during her inaugural address at the official opening ceremony of the Confederations Cup on 15 June. Visibly angry, Rousseff cut her speech short, whereas FIFA President Joseph Blatter, standing by her side, seemed unflustered. Since booing politicians is part of an age-old tradition in Brazil, it could have been a minor incident had it not turned out to be a prelude to the largest demonstrations in the country’s recent history.

The excessive focus on economic development in emerging nations could sideline civil and human rights issues, casting considerable doubt on the stability of the transformation process these countries would like to achieve.

The poor make you rich

Every day in Mexico, it’s virtually impossible not to end up paying for something that will contribute to the vast empire of Carlos Slim, the country’s wealthiest businessman, who vies with Bill Gates for the crown of ‘Richest man in the world’.

Take any one of the 20 million Mexicans living in the country’s capital, Mexico City. He starts off his day with a newspaper and coffee from Sanborns, calls his mum on a Telmex landline and sends a text message via the Telcel mobile network. Then he drives his car insured with Seguros Inbursa and withdraws money from the Inbursa bank, buys a tie from the Mexican branch of Sears, and to top it all off he puts his feet up in his apartment built by Immeuebles Carso. All companies belonging to Carlos Slim.

Joining Europe, with the jitters

On 1 July, Croatia became the 28th country to join the EU, an achievement that required radical transformations. Today, the country looks to the future with greater optimism, prepared for the upcoming challenges. The economic crisis primarily but also the difficult task of convincing its neighbours to join the EU, a symbol of stability and peace.

Known by some as G5

They account for 40% of the world population and 1/5 of the global GDP. They are the BRICS: Brazil, Russia, India, China and South Africa. The most famous of the emerging countries and now a topic in Italian graduation exams. But ten years down the road, the bloc is in trouble: the ‘new G5’ have inherited the problems of the old G7, and risk a similar decline.

In a year’s time Scotland will go to the polls to decide on its independence. Scottish First Minister Alex Salmond and the Scottish National Party are putting their future on the line and the “Yes Scotland” campaign is forging ahead. The economy is key, but will it sway undecided voters?

The date is set: Thursday, 18 September 2014. The day that could decree the dissolution of the United Kingdom is just one year away. The Scots will head to the polls to answer one simple question: should Scotland be an independent country? The only possible answers are also simple: yes or no. No chance of mistakes or confusion there. When launching the Yes campaign, Alex Salmond, Scotland’s First Minister and leader of the Scottish National Party (SNP), stated that since devolution, when
a Scottish Parliament was established, “We have shown we can make a success of running our own health service, schools, local government, police and courts, and much else besides.

From Nelson to Mamphela

Awoman wants to become president of South Africa. Mamphela Aletta Ramphele, aged 65, founded her party Agang (“Let’s build together”) in February, in order to challenge the African National Congress at the presidential elections of 2014. In 19 years, no one has every managed to defeat Nelson Mandela’s party. Highly critical of the current president, Jakob Zuma, Ramphele claims that tata Madiba’s legacy has been betrayed, and the country’s rampant corruption, combined with a lack of social justice, seems to prove her right.