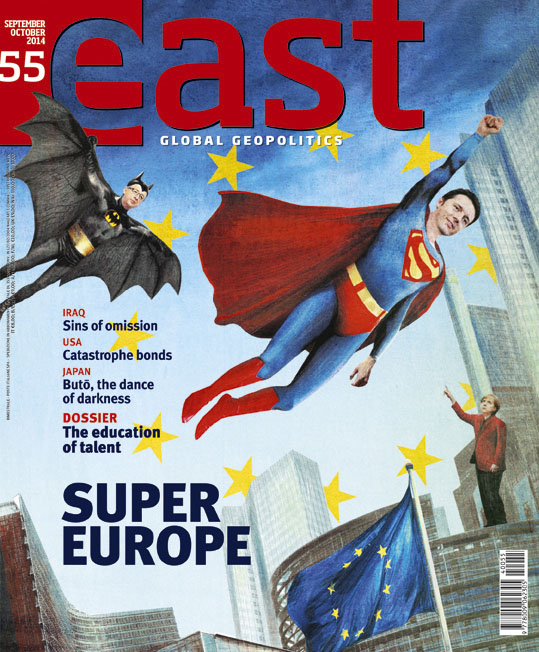 Sins of omission and Foreign Affairs: Romano Prodi and his military attaché, Gen. Giuseppe Cucchi, provide a fresh insight into the Western blunders in the Middle East that have unleashed the new (and very bloody) Caliphate phenomenon.

A great future behind him? Barack Obama is having to come to terms with a drastic loss of popularity in the US, where in many polls his appeal has even dropped below that of George W. Bush. A European, Danilo Taino, and an American, Talbot Logan, offer different takes on the issue.

With Mad Cow Disease, Avian Flu and Swine Fever we were only kidding. But now the Ebola infection could be the real thing.... The 'legendary' Subcommander Marcos claims he was a bit of a fraud and goes into retirement, much as the Corsican and Basque "disco" terrorists; the few left behind are all on Internet and want their own www.rebels.com dominion.

Which English do you speak? Globalization is recklessly relying on the English language, which is beginning to buckle under the weight of its own success.

Bullfighters, violinists, Cordon Bleu chefs, soldiers and 'power babies'. The dossier looks at talent, that intangible and precious ability to do things better than others. Are we born talented or do we become so?

The quality of women in China is just too high.

All lifeguards and bakers? The Super Europe voted in with the recent European Parliamentary elections doesn't seem to know what to do with its elite of super graduates being cranked out by its universities. Well-educated and highly trained, when not unemployed they're under-employed, often in temporary and badly paid jobs, and their talents go wasted.

The megacities are sinking. They're drowning of their own accord, even before the sea level can rise up and swamp them. If we owe the first signs of modernity to the insight of the fabulous Fuggers, its demise might be brought on by the Catastrophe Bonds, the new risk-linked securities that make you rich with disasters. In the meantime cigarette smuggling is changing with the times and doing very well.

Most people know the story of the shepherd boy who 'cried wolf' – and then, when real wolves came to raid his flock, could find noone to believe him. Something similar has happened in the case of the deadly hemorrhagic fever Ebola, now raging across five West African countries, with no indication of containment in sight.

If Brussels is at the wheel, then it must drive.

IMMIGRATION AT THE FOREFRONT

The anti-migrant vote in the European Parliament elections focused EU leaders' attention on the issue at their June summit when France and Italy put the issue of increased funding for Frontex on the agenda.

The 'seismic' EU Parliamentary elections in late May have changed the face of the Union's leadership. Juncker, Merkel and Italy's Renzi are guiding the project, Cameron is trying to stem the tide.

Progress in building a bond between the European population and Brussels.

Remember when we had our own guerrillas?

The invention of the modern world begins with money.

Russia's arms monopoly is a valued supplier to the Pentagon.

Points of view - Yes, we can’t

A new European partnership could strengthen a weakened Obama.

Points of view -Too much success

What have you done for us lately Mr. Obama?

The Vatican Bank tries to overcome a dark past and the smell of money.

The Pope wants you to “make noise”

And makes a lot of noise himself...

The emigration of the heart

Nelson Mandela's 'Rottweiler' talks to East about her passage from a 'very white' supporter of apartheid to key aide of black South Africa's Founding Father.

The persistence of privilege

Statistically, social status is more likely to be inherited over generations than height.