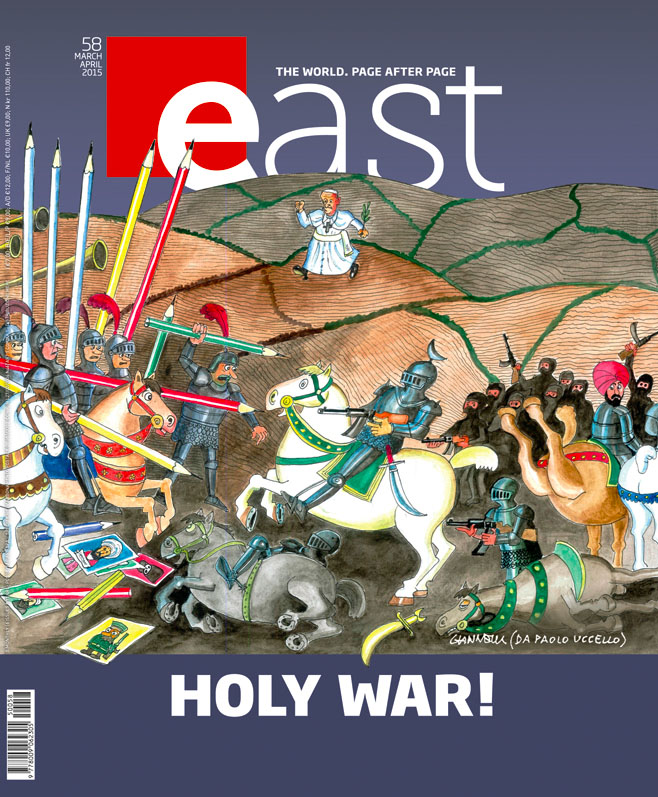 The new issue of East is at newsagents, bookshops and available in digital format from March 1st.
Cover

The Charlie Effect explains why the clash between Islam and the West is all wrong.

Isis is making money and the Oracular Web has no doubts on the crucial issues of 2015.
Europe

While Samantha and Rosetta explore the universe, East-West explains why closing the borders won't stem infiltration by Foreign Fighters.

The Ukrainian crisis divides East and West but unite the ultra soccer fans in the stands and revives Pan-Slavism.

A hesitant and half-cooked European Union only serves the interests of the elites. A thorough legal integration could however make the difference.

Aladin, Nanxi and Federico, three stories that embody pluck, talent and success.
World
New war scenarios. The Pharoah vs the Caliph in Sinai and a Free for All in Libya. Even Israel must choose, while the USA are distracted by the Chinese Imperial dream.

A Nigerian banker-philanthropist launches Africapitalism. Cuba prepares to play its part in world markets while Abenomics in Japan is having a second go.
Dossier

The USA and the EU have long been betrothed, might they step up to the altar? The unpredictable outcome of  the on-going Transatlantic partnership negotiations. To be or not to be……

FRONT PAGE - Where we stand

For the past 10 years, we have strived to inform our readers about what has happened the world over, looking beyond phenomena and current events to provide facts, forecasts and analyses that stem from studies, interviews and journalistic fieldwork. Which have sometimes helped us even anticipate events.

Thoughts and considerations of a Muslim who is against a clash between Islam and the West.

The tables are turned

When oil prices determine foreign policy and global enterprise guarantees democracy, then terrorists can have a free hand.

The sharp decline in oil prices at the end of 2014 has once again brought to light the political implications of economic choices that affect commodities, as is the case with OPEC decisions.

The Web as oracle

Immigration, terrorism and Islamophobia: what's in store in 2015?

Perspective on Research - With huge emphasis on research producing jobs as quickly as possible, scientists warn that while this approach may take care of the present, it will be a failure over the longer term.

“Eurocrats produce absurd rules”. This platitude is often heard in the EU, and must have some basis in truth, if the ‘first among equals’ Frans Timmermans has been appointed Commissioner for Better Regulation. But as all misconceptions of any note , it reaches levels beyond belief, which can verge on the mendacious. Here are a few things the Eurocrats have not had their say on, despite what the newspapers say.

The EU, a legal requirement

The European legal integration process must take place right away or the EU risks being advantageous only for its elite.

POINT OF VIEW - Iran, from rogue state to reliable ally?

My enemy's enemy is my friend. Satan is ready to bow to military logic, but not the Saudis and Israelis.

The Ukrainian crisis divides East and West and reawakens pan-Slavism. Putin is successfully courting all nationalist forces within Europe.

The ultras’ role in the war

Divided over football, united for freedom: in the stands of Ukraine's arenas, the fans chant the same song.

The country that boasts state-of-the-art technology has to come to terms with its past.

The high election threshold limits and pools Erdogan's rivals but the Kurds with their lay European approach are the ones that stand out most.

Elections across the Wall

Reunification is unthinkable, a light federation might appease investors interested in the abundant oil fields of these quarrelsome Cypriots.