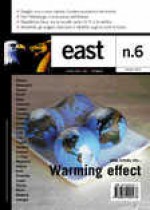 Can we find salvation in the “thermodynamic solar” project, occupying Nobel laureate Carlo Rubbia in Spain, given that Italy hasn’t come up with either sponsors or resources? The international scientific community is very careful not to make a direct link between the greenhouse effect and the hurricanes devastating the United States and Asia. But the suspicion that this is precisely what’s happening is fast catching on, as can be seen in articles in the leading international press reproduced in the section “Points of View” (page 143). But scientists are instead quite clear that the Kyoto Protocol, despite its limitations, is currently the only political response to global warming. If all the industrialised countries were to sign up, the amount of gas present in the atmosphere would halt at current levels. It may not be much, but it’s a start. It’s a pity that giants like the USA, China and India are missing from the roll call, says Donato Speroni in the opening article of this issue of east (page 8). China and India: “giants”? Well, not so many years ago this type of definition would have been interpreted by most as far-fetched. But not today. The 2005 Report by the Luigi Einaudi Research and Documentation Centre in Turin is carrying out a detailed study of the processes that are bringing about deep changes in the balances and power relationships in the world economy; the report’s title: The Sun Rises In The East. For the contents, we refer the reader to the Dossier (page 81), in particular the far-reaching opening interview with economist Mario Deaglio. And for completeness and originality, the reader can find an article on China by Stefano Chiarlone and Francesco Giordano (page 18). Finally, something completely new: in collaboration with
Cittadinanzattiva (“Active Citizenship”): starting from this issue of east, we will be publishing extensive overviews of the Civil Society Index reports on the countries of central-east Europe. The first covers the Czech Republic, and is edited by Vittorino Ferla (page 30).

Despite its present crisis, the European ideal is certainly not destined to experience a decline.

Katrina, i.e. dying from the heat

Limited though it may be, the Kyoto Protocol has so far been the only political response to global warming. If all the countries in the world ratified it, the quantity of gases in the atmosphere could be kept at current levels.

Inside the hurricane: survival techniques

5 September 2005. Two days after Hurricane Katrina hit New Orleans, the Walgreens store on the corner of Royal and Iberville streets was still closed.