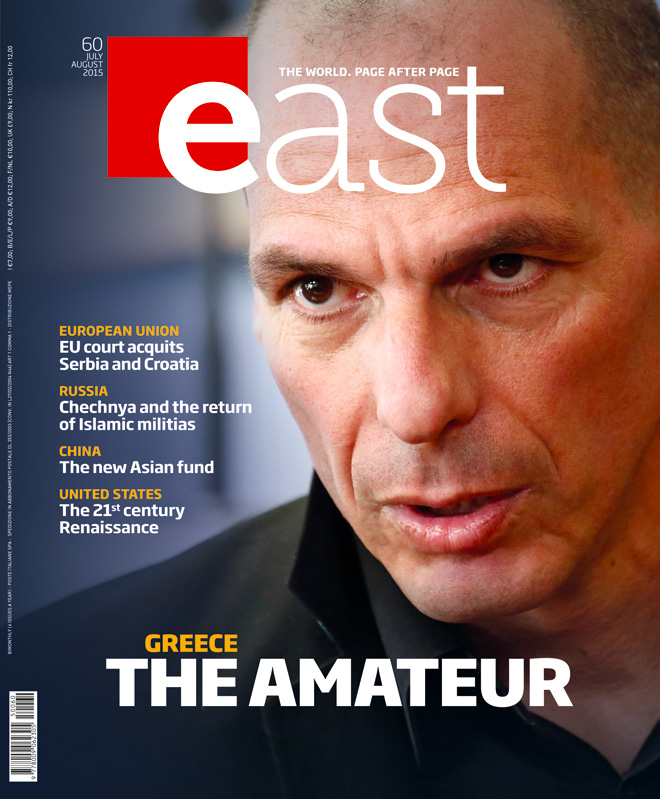 The new issue of East is available from newsagents, bookshops and in digital format from July 1st.

The runaway train called Greece: about to derail or still on track?

This modern Greek tragedy seen from a Greek and a European perspective. The possible repercussions of a Greek exodos are considered, alongside the reasons why the Country has got so out of control: the Greek ruling class and the major Greek tax evaders.

For how long will the continent that has been the cradle of modern civilisation keep thinking that it is under siege?

Will Europe manage to retain its civil outlook when faced with overwhelming immigration?While the "Dublin Wall" totters, various local 'squires' dream of building their own very exclusive provincial enclaves.

There'slittle signs of peace in the Middle East and Africa, from Israel to Mali, including Morocco, one of the gateways for humanity fleeing warzones.

The Asian tensions are exclusively diplomatic and financial (for the time being) and China is fully aware that the true warrior does his best to keep out of a fight.

Martians may not have landed yet, but there's no doubt that the world is caught up in a web, a no-holds-barred conversation with the enterprising Stephen Brobst highlights the advantages and dangers of this21st century Renaissance; an entirely digital phenomenon.

Are politics intrinsically no global, wonders the quick-witted Erik Nielsen? Perhaps that's why it can't find a handle on contemporary economics, which is interconnected and global.

Iran wonders; a leap in time and we go back over the fascinating transition between traditional models and so called modern ones (of last century, mind).

The ayatollahs are still wondering if this leap into the unknown is worth their while … (knowing they'd be swept away in the process?). In the meantime,Iranian artists have already got the bit between their teeth and their contemporary art is making worldwide waves in 21st century auctions.

This issue’s cover is dedicated to the most glamorous European minister of the moment, who on more than one occasion has been labelled incompetent by the international press, despite a résumé that boasts prestigious university posts at Essex, Cambridge and Sydney.

Ostensibly about nuclear power, the agreement revolves around peace and the EU’s role with Iran reinstated.

Decisions can still be reached, but could it be the derailment is inevitable?

Deals are off in the Aegean

The country may be suffering under the economic crisis but it can still rely on its ‘blue gold’.

Exodos or no exodos

Many rule out Greece's exit from the eurozone. The Greeks most of all!

Greece is attempting to pin down its billionaire tax evaders to try and stave off its creditors.

Timmermans introduces downsizing reforms package - On 19 May, the first vice-president of the European Commission, Frans Timmermans, presented the Better Regulation plan, a package of reforms aimed at simplifying and streamlining the prodigious European executive legislative process.

In the wake of yet another tragedy in the Mediterranean, Europe has been forced to debate ways to better coordinate migration. The issue was the subject of a European Council special meeting in April and was discussed during the European Parliament plenary session in Strasbourg. We have fact-checked some of the most interesting statements.

Berlin has the running of Europe's foreign policy. But for ECFR's Rome office, it may not be enough.

Schengen is not that far from Bruxelles

Freedom of movement between European countries is one of the great EU achievements, but it's not irreversible, nor to be expected.

Talk of a single EU tax policy is back. Could it pan out this time?

The Court of Human Rights in the Hague has rejected the mutual accusations of genocide between Serbia and Croatia.

The “Dublin Wall” is tottering

They can only apply for asylum in the country where they land. If they leave, they're sent back. A law that defies the most basic of EU values.

When will the collective consciousness wake up to the thousands of people trying to reach the European coast?

POINT OF VIEW - Rife immigration, but for how long?

It's by no means a novelty and it's not going to go away, but there's still no real plan to deal with its repercussions or exploit its long-term advantages.

The United Kingdom has electoral jitters

Cameron instigates a new phase of British history that could spell disaster for the EU.