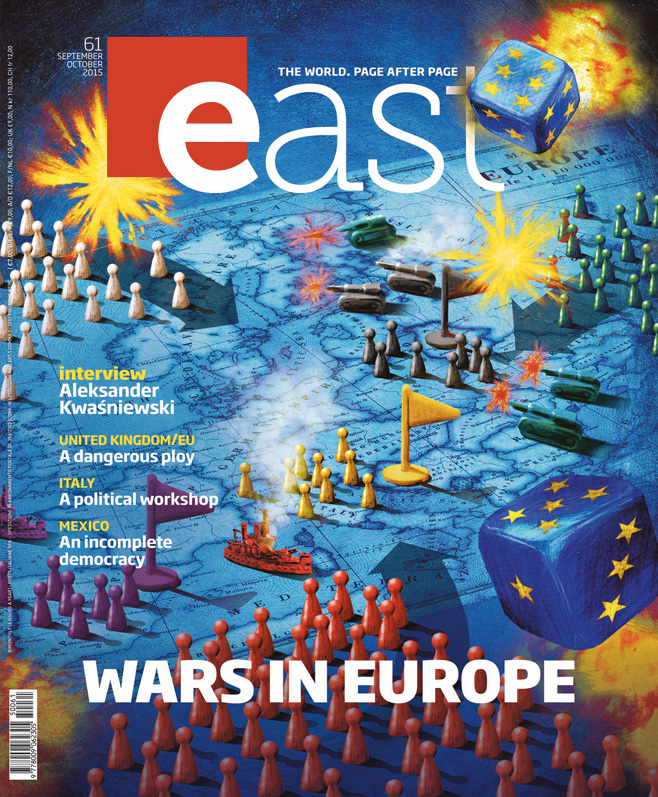 The new issue of East will be availableat newsagents, bookshops and in digital format from the 1st of September.

Europe as an Idea and Europe as a Fortress: how to avoid the clash and the irresponsible populismsthat are fuelling it. Javier Solana and Aleksander Kwasniewski say Europe must regenerate its democratic process if it wants to avoid a dangerous regression. While the much feared migrant invasion, according to the numbers, is nowhere to be seen.

The United Kingdom could be playing with fire by endangering its relationship with the European Union to solve its own internal political problems.

The Vatican is playing its cards on the international diplomatic circuit while Italian politics is an ongoing experiment that deserves attention.

People are wondering if after the Yalta accords a new form of Holy Alliance might help re-establish international stability and security, but in the meantime the authoritarian tendencies in Turkey and the Balkans are meeting strong opposition and the European Council for Nuclear Research (CERN) is back in business.

The Myanmar government knows how to win diplomatic battles but isn't too smart at building peace within its own borders.

Corruption is on the rise in Mexico, along with democracy… the 2015 elections have been among the most violent in the country's history.

"Stepping on the tiger's tail' says one wise pieceof advice in the Chinese Book of Changes.  It suits situations that involve major changes whose outcome is expected to be favourable but require caution and wariness, attention to detail and the readiness to let the forces involved develop without undue haste. The new Silk Road and how fresh ways of interacting with China are now developing.

During the Great Depression that began in 1929, several countries abandoned the gold standard (including the UK), while others, such as France, remained anchored to it. This led to a collapse of international trade, which amplified and prolonged the effects of the US crisis. The lesson we should have learned is that national responses to global crises are ineffective and can be highly destabilizing, and in the case in point were partially responsible for the climate that led to the outbreak of the disastrous Second World War.

The elections in Spain and Portugal: reconsidering the EU’s objectives and thoughts on a democratic regeneration of Europe.

Although the immigration emergency in Southern Europe is quite real, the phenomenon tends to trigger biased — that is, highly negative — media coverage that fails to take into consideration the great opportunity it offers a rapidly ageing continent.

EU, eurozone and the role of Poland. The former Polish president speaks out about affairs in Europe and elsewhere.

by a cura di Pagellapolitica.it

Approximately 2% of the world's refugees go to Europe

The Polish elections in October are of great importance, even for Europe.

Wavering between yes and no, the United Kingdom seems to be waiting for a push or a shove from the EU.

POINT OF VIEW - That Holy Alliance wasn't that bad after all…

The Yalta accords no longer hold water, so maybe a pact like the Holy Alliance could rebuild stability and security.

The unexpected stability of the government helps and fuels a profound political transformation.

The Pope has world diplomacies reeling

Armed clashes reappear in the Balkans: the Albanian minority calls for the resignation of the nationalist – conservative prime minister.

EUROPEAN CONSCIENCE - CERN. The Large Hadron Collider is back in business

One of the most important examples of European scientific collaboration is ready to show all its potential.

In China they call them fuerdai, literally speaking "the second-generation rich". they are young and hugely wealthy, the sons of the businessmen who partook of the Chinese economic boom. Cars, luxury holidays, clothes, watches and especially high-tech gadgets.
The fuerdai show off their status on the social networks (especially Weibo, the Chinese Instagram) and are truly hooked on the internet, spending at least 14 hours a day on the web. A social phenomenon that has got even President Xi Jinping worried. He has invited their parents to teach them the value of the money they flaunt so brazenly.

Between (economic) hopes and (geopolitical) scepticism: China and Europe try to have a difficult conversation.

They come and go, and bring untold wealth

The Chinese aren’t coming, they’re already here. According to data from the World Bank and China Watch, outbound international tourism – people travelling abroad for reasons other than “a remunerated activity in the country visited” – among Chinese nationals nearly doubled from 2010 to 2014.