Energy independence and the “pipeline of democracies”

EastMed gas pipeline is not solely a piece of infrastructure. It is a physical link between the countries it crosses causing several geopolitical tensions. But it could also trigger a new season of cooperation and shared prosperity in the EU. How to reconcile economics with geopolitics?

An interesting conference entitled Energy and the Eastern Mediterranean in 2022, which was jointly organized by the Fondazione Luigi Einaudi and the Jerusalem Center for Public Affairs took place few days ago. It concentrated on the EastMed gas pipeline that would carry natural gas from the off-shore fields of Israel and Cyprus via Greece and then westward to Italy.

A gas pipeline is not solely a piece of infrastructure. It is a physical link that creates long-term bonds – good or bad - between the countries it crosses. And conversely, it may also create divisions with the countries it doesn’t. This is true of the EastMed gas pipeline. The decision to bypass Turkey is both the effect and cause of geo-political considerations. 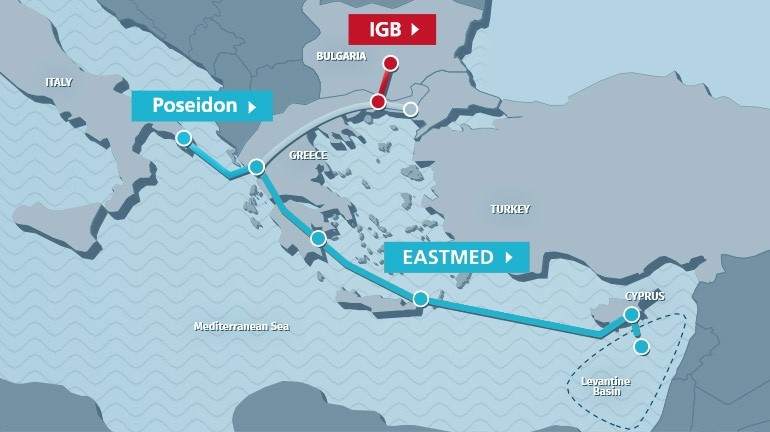 The planned route of the Eastern Mediterranean Gas Pipeline.

With an initial planned capacity of 10 billion cubic meters per annum (BCM) that could be potentially doubled in a second phase, it would be an important milestone in Europe’s strategy in substituting Russian gas within the framework of the REPower EU Plan. In 2021, Russia’s exports of natural gas to Europe amounted to 155 BCM, out of which 29 BCM went to Italy and approximately 20 BCM to the countries of South-East Europe, including Greece. These are the countries that could directly benefit from the gas supply of the Eastern Mediterranean.

According to geologists’ estimations, the Levant Basin may hold gas reserves of up to 3,500 BCM, which would be able to meet Europe’s needs for nearly 10 years. The main options to bring that gas to the European market are three. One is to transport it via a pipeline to Egypt where it would be liquified and then exported as LNG. This is already happening for Egyptian and Israeli gas. However, with an overall liquefaction capacity of 13 BCM per year out of which a large part is already utilized, the two facilities at Idku and Damietta do not have sufficient capacity left to process significant quantities of additional gas. In any case, their planned expansion would be compatible with the EastMed pipeline.

In fact, after the discovery in Egyptian waters of the largest Mediterranean field – Zohr - holding gas reserves for 850 BCM, we can foresee that this gas will be used to feed Egypt’s growing gas demand with the rest to be exported via LNG to Europe or via pipeline to neighboring countries.

The second option would be the easiest one both technically and economically: to bring Cyprus and Israel’s gas to Turkey through a newly-built pipeline and then connect this to the Turkish gas transportation network. But this solution would lack political wisdom: why give Turkish President Recep Tayyip Erdogan an additional tool to blackmail Europe as he is already doing through immigrants? It is not a surprise that he is extremely vocal in support of this solution. If no political condition is requested by the EU and the US in exchange for Turkey’s participation in the project it would also allow Turkey to further crystalize the status quo in the island of Cyprus, divided since 1974 due to Ankara’s illegal occupation of its northern part.

Here enters the third option: the EastMed gas pipeline, which has also been labeled the “pipeline of democracies”. With a total length of around 1,900 km it would have a first subsea leg from Israeli and Cypriot offshore gas fields to Cyprus, a second leg – the most challenging one with a length of 700 km reaching a depth of up to 3,000 meters - from Cyprus to Crete, and a third leg from Crete to the Peloponnesus where it would connect to the to-be-built Poseidon pipeline that will link Greece’s gas network with Italy. Despite its technical complexity, similar projects have successfully been carried out. The North Stream is a twin pipeline system running for 1,224 km through the Baltic Sea and transports 55 BCM of gas. It costed €7.4 billion. The Langeled gas pipeline runs for 1,166 km under the North Sea and transports gas from Norway to the eastern coast of the UK. It costed around €3 billion. Stones, 320 km off the coast of Texas and 2,900 meters deep, is the world’s deepest offshore oil and gas field in operation.

Since 2013, the EastMed was included among the EU’s Projects of Common Interest and received €34.5 million in grants for its preparation. In 2019, the project received a formal recognition of its geo-political relevance through the establishment of the East Mediterranean Gas Forum. With member countries including Cyprus, Egypt, France, Greece, Israel, Italy, Palestine and Jordan, and observers including the US, it aims at being “a transformational project in the region whose significance goes beyond energy; it is a pivotal enabler of regional peace and a vital engine for economic growth and prosperity.” The same year, Greece, Cyprus, and Israel signed an intergovernmental agreement for the EastMed gas pipeline in the presence of then US Secretary of State Mike Pompeo, which marked Washington’s support of the project.

Evidently, the project partnership reflects shared concerns regarding Turkey’s position. Ankara strongly opposes the project and responded by starting prospection operations in Greek and Cypriot waters and threatening international companies’ exploration vessels that were operating off the coasts of Cyprus. Erdogan also argues that Northern Cypriots’ rights to the exploitation of the island’s natural resources should be safeguarded. To create a barrier to the EastMed pipeline, Ankara entered into an agreement with Libya for the demarcation of the respective exclusive economic zones. These would be bordering with one another, thus cutting EastMed’s trajectory.

Under the official reason that the US will support projects that accelerate the transition to a low-carbon economy and that electricity interconnectors capable to transport both renewable energy and gas-generated electricity would better serve this purpose, the Biden administration withdrew its support to the project. The projects that the US was referring to are the EuroAsia interconnector between Israel, Cyprus and Greece and the EuroAfrica interconnector between Egypt and Greece. In reality, the US’s change of attitude is explained by the Russia-Ukraine war and Washington’s willingness to keep Turkey outside of Moscow’s orbit.

Then, how to reconcile economics with geopolitics? The re-unification of Cyprus may be a win-win solution provided it is achieved under fair conditions. Attempts to re-unify the island of Cyprus have so far been unsuccessful.

Together with the possible doubling of capacity of the Trans-Adriatic Pipeline, the entry into function of the LNG regasification terminals of Greece’s Alexandroupolis next year and Croatia’s Krk last year, the EastMed pipeline could help take Europe’s weakest region out of Russian grip and trigger a new season of cooperation and shared prosperity.