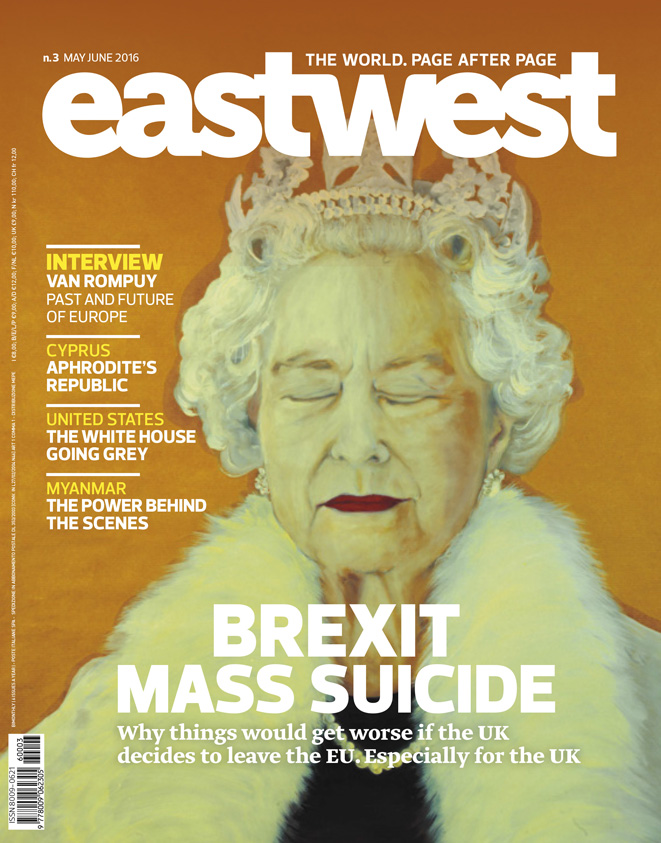 Here comes the new Eastwest! From the 2nd of May at newsagents, bookshops and in digital format .

Great Britain under stress! The United Kingdom heads for the ballot boxes once again to voice its belief in the European Union. The referendum gamble was (also) supposed to reinforce Cameron's political standing but the outcome is very much in the balance and Cameron himself risks being ousted, both by his countrymen and his party. Europe would rather not have to say Bye bye to the English Patient yet… many would relish eliminating the feared "Three Lions" from the European championships … and London would then become a handy appendage of New York, and we would be spared the jet lag.

Straddling past and future, Herman Van Rompuy provides Eastwest with an exclusive account of his years in the front line as President of the European Council: from 2009 to 2014, five eventful years that also witnessed the eruption of the Russian-Ukrainian conflict that is still smouldering in the background.
Matteo Renzi raises the stakes in his dealings with the European Union by riding a wave of grandeur but also biding his time when necessary, a somewhat mystifying approach.
Even Ireland is now among the European countries that have become ungovernable following democratic elections, but what are all these parties up to?

Pitched into a conundrum by the drop in oil prices, the Gulf Emirs discover... VAT! while all negotiations now have to pass through Muscat.
The indigenous spirit of the Americas triumphs once more: the White House risks slipping back a couple of generations and everyone is hoping the Latin hemisphere can miraculously fight back.
In Iran the power mongers shy away from the ballot boxes while in Myanmar the Mastermind schemes in the shadow.

Who stands to gain by the Russian-European standoff? The former Russian Foreign Minister, Igor Ivanov, invites Russians and Westerners to overcome longstanding feuds and geo-political depression and points to a strategy of optimism and warmth. Perhaps Russia is not so draughty after all…

All the articles in this number.

I just returned from a trip to the US where I reached the following conclusion: the next president of the United States – whoever he or she is – will be one of the least beloved persons to hold the office in recent decades. Donald Trump’s seemingly structural political incorrectness worries the Republican establishment and may well secure a victory for Hillary Clinton.

Has Cameron taken into account the mood swings of his electorate once the Three Lions are out of the next European Cup?

Breathing down his neck

For Cameron it’s two referendums in one: on his Tory leadership and his charisma as prime minister. And the fate of Europe is at stake.

A disaster for the City

If we leave the EU in isolation, we could soon be run by America, with its huge financial clout, and by China, which very much hopes to become a major world player.

The European Union sits tight for the United Kingdom and its claustrophobic dream of annihilation. A sophisticated, self-destructive syndrome.

Brexit scares the Americans (a tad)

Washington looks overseas: the possibility of Great Britain’s leaving the EU is a far off threat, but shouldn’t be taken lightly.

In an attempt to encourage cross-border e-commerce, on 9 January the European Commission launched an internet platform to resolve disputes between consumers and online sellers of goods and services out-of-court. Consumers can now lodge a complaint through the Online Dispute Resolution (ODR) website in their own language, indicating the goods, services, supplier or seller in question.

The possibility of setting up an integrated European intelligence network is out of the question without a will to install a single political subject to which these services would answer.

What’s up with TTIP?

The Transatlantic Trade and Investment Partnership is supposed to cut duties and import taxes between Europe and the United States, but so far it hasn’t much to show for itself.

The Russian attack in Ukraine, the war in Syria, the refugee crisis, a crumbling Libya, al-Sisi’s Egypt, a divided Europe. It’s a cold war in the making.

Point of view - A pope straddling politics and doctrine

An early follower of the rules of Saint Ignatius, the pope then moved over to Saint Francis and now uses religion to bridge different cultures.

Europe finds the Celtic tiger has a sting in its tail

The election results have suddenly revealed voters’ lack of faith in the government.

They may even be illusions of grandeur – as the foreign press claim – yet Renzi’s Italy is growing, ever so slightly!

Twenty years after the Dayton accords

The 1996 agreement stopped the war but hasn’t ensured peace. The country waivers between the nightmares of thepast andthedreamof abetter future.

The negotiations in January went well: Anastasiades and Akinci trust in a reunification that must be granted the utmost support by the international community.

European conscience - Not all refugees are the same

In the EU all refugees should be equal, but some are more equal than others.