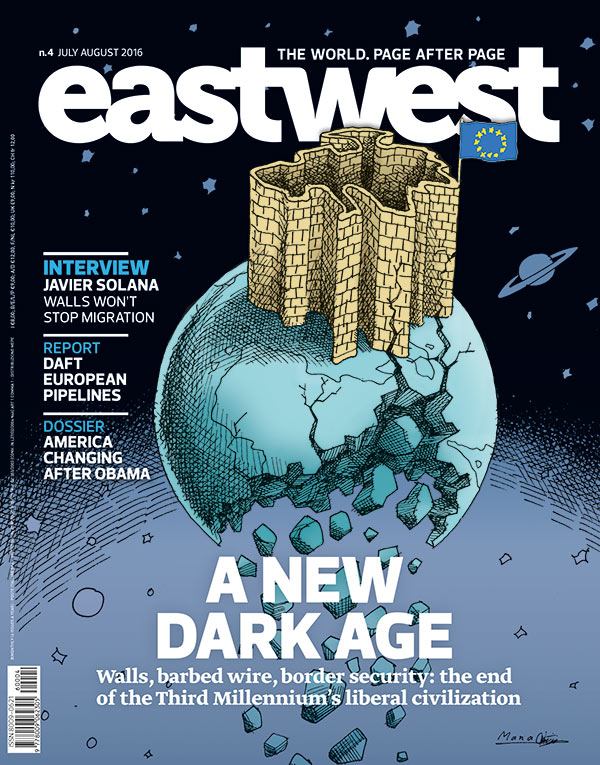 From the 1st of July the new issue of Eastwest will be available from newsstands, bookshops and in digital format

Eastwest's annual Forum will be focusing on Europe of the future, the only way of conceiving a European future which is otherwise fated to become a plethora of ghettoes, backyards and lost opportunities.

To quote the positive vision held by the British parliamentarian Jo Cox: a Europe bursting with the energy of all those who view it as a driving force for life and development rather than a dying fortress that can't be defended.

Retrenchment is rife, but we hope the more enlightened can ward it off, and these forces will be celebrated during the East Forum in Rome on July 14 next.

Javier Solanais featured in an interview on the new cycle that might relaunch the European Union towards a second modernity, in this third millennium.

National democracies can't cope and tend to fuel political instability, in the East and West alike.

No national leader can fill the power void that risks jeopardizing peace and the economic development in Europe and its neighbouring countries.

Doors are closing and walls are being built particularly in the minds of those who can't make sense of the winds of change and instead try to step out of history and evolution.

Even in the Middle East the borders imposed by the "victors" a hundred years ago are now coming undone at the seams.

There's no historic solution within these boundaries. Even the cast iron balance of power guaranteed by oil is no longer reliable.

The dualism between wealth and poverty holds sway. In the island of Hispaniola, in the Korean peninsula, even in Africa, where all the great world powers face off: Japan and China, Iran and Saudi Arabia.

The world is perhaps yearning for a new 'American dream' but the outcome of the recent primaries would seem to postpone any chance of one, at least until the third decade of the Millennium.

All the articles in this number.

In June the Swiss (78%) said no to the introduction of a monthly wage for everyone, from the cradle to the grave, as a guarantee of a dignified existence. This provided further confirmation that everyone is required to sharpen up and do all they can to earn a living by providing useful services to the community or appreciated by markets. The primary role of the state is to create ideal conditions to enable everyone to exploit their talents in a fair and transparent competitive environment along with appropriate solidarity mechanisms to support the less fortunate. Let’s hope that the clear indication provided by this vote might act as a warning for all the populist movements in Europe, which are gaining increasing consensus, so they no longer come up with such half-cocked proposals.

A wall will make us safe? This is the hot question these days in many European countries. And the problem is that the answer is often yes!

The so-called second modernity calls for a more developed cosmopolitan awareness than the one holding sway today, and democracy is not just about voting regularly.

The migrant crisis bolsters Euroscepticism in Eastern European countries that must first of all guarantee an appropriate quality of life for their citizens.

Migration is a global and permanent demographic phenomenon that calls for the establishment of super-national authorities and policies capable of looking beyond cyclical emergencies.

Towards a European border police force?

At a time when country borders are unstable, the European Union boosts its Frontex program to secure its external borders.

PART ONE: Are existing infrastructures being suitably exploited? No! The sketchy European pipeline network. What is needed to set up a truly European gas market.

MOBILE - Roaming tariffs drop lower and will soon be eliminated.

A ship with two captains runs aground

The European Council and Commission face serious challenges in foreign affairs, migration, the banking union and energy but must overcome their throttling duality: confederation or federation?

Europe’s unstable countries are trying to get back on their feet. Ireland, once again a Celtic Tiger, leads the pack. The post-austerity era has begun.

If in doubt, blame Schengen

POINT OF VIEW - An olive branch for Moscow

Detente between the West and Moscow is required and delays will fuel dangerous hotbeds that may get out of control. The EU must take a stand that it hasn’t managed or fears to take.

The doors are closing

Promoting a welcoming culture, Merkel opened the doors of the European Union to refugees. Austria however aims to close the Brenner Pass.

Political vagaries, a hatred of the elite, corruption and staunch nationalism divide Eastern Europe between populists and liberals.

The country is in a limbo, still awaiting a real truce with Russia and the fulfilment of promises made by its leader, Petro Poroshenko.

Eurovision Song Contest: and the winner is ...

The ESC is probably the only truly European television program. A singer from each country competes and call-in votes decide the victor.