Emmott: Europe’s is a crisis of will, not cash 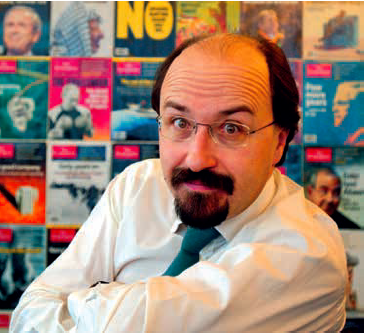 Bill Emmott is one of the world’s bestknown journalists. As editor of The Economist for thirteen years between 1993 and 2006, he took the paper from being a wellrespected specialist publication selling a few hundred thousand copies to a million-copy-aweek powerhouse with a worldwide influence greater than that of many sovereign nations. The author of successful books on both Japan and Italy, he has especially directed his attention to the second country in recent years, not so much out of sentiment – “though I do like the food very much” – as because he sees in Italy’s political and economic turbulence a kind of paradigm for a broader crisis of Europe and the West in general. The perception grew during the making of his film Girlfriend in a Coma together with director Annalisa Piras. This well-received documentary about the social and political paralysis of modern Italy – the “Girlfriend” – evokes phenomena that, while they may be especially evident in Italian society, appear to Emmott to be equally present in the more general decline of Europe.

“There is a great temptation to attribute the waning of European leadership and influence to global economic turmoil – he says – a view that tends to let everybody off the hook. But decline as a long-term phenomenon has not been determined by the economic crisis, of which it is as at least as much a symptom as a cause. “It’s certainly true that here has been a failure of our financial superstructure and the institutions that were meant to govern it, but the more important question is why that was allowed to happen. “We were already concerned by high European unemployment in the ’90s and have been debating the issues around “eurosclerosis” since the 1980s when we began struggling to meet the impact of a series of ‘rising star’ competitors; first Japan, then China today, with India and Brazil in the wings. “Our continent has reacted to change not so much with panic as with paralysis, like a rabbit caught in the headlights of an oncoming automobile.”

Emmott thinks we’ve forgotten how to struggle: “We were in a sense given a fresh start after World War II, when Europe emerged into a far more liberal environment than previously, where there appeared to be room for everyone. “Society now seems to have lost its ability to evolve dynamically and our democracy has become much less capable of mediating between conflicting interests.” There has been, Emmott believes, a “loss of nerve” on the part of those who are meant to represent us in the democratic process, blocking the mechanisms by which our society governs its evolution. “Part of this is due to growing complexity. Politics is by definition always local, but the economy is not and our leaders do not appear to understand how to work across political boundaries. “In the United States we are also seeing a loss of common ground between the two dominant political parties, unable to work together but still strong enough to block new political actors from emerging.

“There is also a technological gap that manifests itself as incompetence. The Snowden affair has shown that the U.S. cannot manage its vast spying apparatus well enough to keep its existence and extent a secret. “The long-overdue national health system, Obamacare, which was supposed to be open and available to everyone because it was web-based, was launched and then simply failed to work. That something so critical was handled with such supremely public incompetence is very worrying.”

The situation is growing difficult for governing classes everywhere, at best slow and at worst incapable of reacting to change. This has been, Emmott thinks, especially marked in Europe, where ‘monomaniacal’ special interest groups paralyze policy with their conflicting vetoes. It’s a depressing scenario, and he sees only one way out: “We take the virtues of our society for granted, but they didn’t appear by chance. We need to regain the will that is necessary to maintain and strengthen them. “We’re trapped between conflicting expectations and the various senses of entitlement, stuck on untenable positions growing from well-intended but unsustainable social policies introduced in the ’60s and ‘70s. “If we can’t raise awareness of these problems our decline will lead to a collapse in our standard of living, with dramatic effects on social stability, on public order and perhaps even in our ability to avoid the violence of one country towards another: war. “ We must keep the balance between generations, making room for the young in the economy, not discriminating against the old but by giving equal opportunities to all. “The founder of The Economist, James Wilson, was fighting that kind of battle in the 1840’s when he launched the publication. He said that he was looking to conduct a “severe contest” between intelligence – by which he meant knowledge – and timidity, something he felt grew out of ignorance. “That’s why, with Annalisa Piras – who directed Girlfriend in a Coma – we’ve created the “Wake Up Foundation”: to increase knowledge, as Wilson said, to help overcome timidity with a new film about Europe’s crisis, its own “coma”. “In technically advanced societies it’s easy to hide from reality. Our ease has led to a collapse of moral courage and a growing failure of individual responsibility – a Facebook ‘like’ is no substitute for actually standing up for what you believe…”

Emmott, a Londoner by birth, now lives in an extremely rural part of distant Somerset, on the West Coast of England, where “It’s easier to think”, he says. “I do have to spend time in London as well, something I enjoy. There’s the interesting paradox that as Britain has become increasingly eurosceptic, London has become steadily more European. I think that today it is the most fully European of Europe’s cities.”