Immigrants are this century’s favourite scapegoats and migration policies are one of the most controversial subjects when it comes to politics. With the next parliamentary elections coming up next May 2015, 40% of the electorate claims immigration is the most pressing issue. 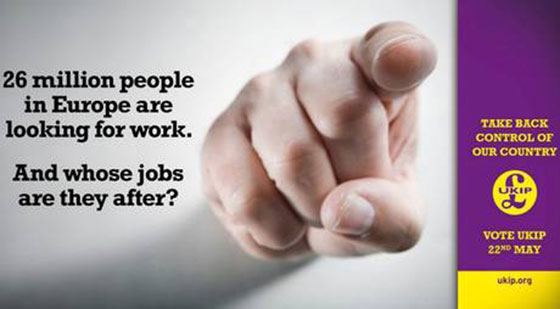 Another protagonist of the current political debate is the country’s future in the European Union.The United Kingdom Independence Party (Ukip) is the Euro-sceptic party par excellence and it is gaining popularity. Earlier this year Ukip won more seats than any other UK party in the European parliament and 14% of the electorate would vote for Ukip today. Amongst the Ukip’s key arguments is the one that the freedom of movement across the union is damaging the UK, as EU migrants are draining the UK’s finances without giving anything substantial back. The UK, the argument goes, should regain control of its borders by leaving the European Union.

While the government can control the immigration from outside the EU by simply reducing the number of visas issued, this is not possible when it comes to migration within the EU and that is why the latter is a very important political subject. In fact, other parties too have been trying to tackle the issue. Earlier this year the leader of the Conservatives, Prime Minister David Cameron, said he would present a plan to withdraw child benefits from EU migrants when renegotiating UK’s membership in the EU. Around the same time member of Parliament and the Labour Party Chuka Umunna suggested the EU should ban highly skilled workers from less affluent EU members taking low-skilled jobs in richer member states.

The myth that migrants from the EU are damaging the UK economy has yet againbeenproven wrong by a new studyby the University College London released last week. The study, conducted by UCL’s centre for research and analysis of migration, showed that recent EU migrants pay more taxes than they receive in benefits and so that rather than aggravating government expenditure they contribute to funding public services. The calculated positive fiscal contribution of EU migrants amounted to £20bn between 2000 and 2011. The reason for this is that most of these migrants are highly skilled migrants from Western Europe, with 62% of them having a university degree, compared with 24% of British workforce, and they find employment relatively easily (70% of those who arrived in the UK since 2000 are employed).

Unfortunately it is unlikely that this new study will put an end to the claim that migrants negatively impact the UK. When being confronted earlier this year with data proving that migrants were beneficial to the economy the leader of Ukip, Neils Farage, cunninglyrepliedthat “some things matter more than money”, thus moving the debate away from the cold sphere of numbers and grounding it in emotions, culture, and sense of community.Ironically though, on the Ukip officialwebsite the “issue” of migration is described mainly in economic terms.

Data and statistics might not win a political debate, but they definitely provide the basis for credibility.