The Europe of Maastricht

With Federica Mogherini we go through the recent history of the European integration process. We will find out things we did not know…

In 2017, at the occasion of the twenty-fifth anniversary of the Treaty of Maastricht, Federica Mogherini – the then High Representative of the European Union for Foreign Affairs and Security Policy – delivered a speech. In this speech, she concisely summarized the grand ambitions, which were put in writing back then: ‘The Treaty of Maastricht was a revolution: for the first time in the history of the world, building peace became the aspiration of an entire continent’. Mogherini was born in 1973 and went to university in the early 1990s. In her speech, she recalled the spirit of that time, and said: ‘I remember very well the hopes of my generation at the end of the Cold War, the bold hopes and expectations for a “new global order”’; – others of her generation, across Europe, do remember the same.

Mogherini sent out her message from Maastricht, a city which, in moments of particular self-confidence, refers to itself as the ‘balcony of Europe’, enabling you to have an outlook beyond one’s own daily life and identity, yet from an isolated place. Europe, however, counts numerous balconies. They are all built on these local stories, in which time rules and politics and power become the psychological relation they, in essence, always remain.

It was on such a balcony, where the French novelist Roger Martin du Gard positioned himself during the 1920s and 1930s to look back at that fatal moment, in which Europe had crashed into its Great War, now a hundred years ago. It is from that position that Martin du Gard wrote his great family epic, entitled Les Thibaults, in which he describes the un-comprehensible rally around fake news and real bluff in the run-up to World War 1. This maddening rat race of the grandstanding of nations and certain individuals, which, promptly, became too violent and too powerful for Europe, and unleashed a fresh and pitch black history, spanning a period of seventy-five years, during which Europe, according to the British historian Norman Davies, ‘was divided by the longest of its civil wars’– lasting from 1914 until 1990.

In the last part of his book, Martin du Gard, describes the summer of 1914, during which literally nobody could escape the great transition from peace and freedom to war and coercion. This transition, during which ‘everything happens as if the individual – while living in peace – had forgotten something essential about the social condition’, namely that he is powerless without others, and that where others are powerless, he is too.

The longest of Europe’s civil wars only ended in 1990 with the peace treaty with, and regarding, Germany. This treaty laid the foundations for the end of the Cold War and the reunification of Europe, facilitated by the process of European integration, and re-enshrined in the Treaty on European Union, signed in Maastricht. But the Europe of ‘Maastricht’ was another Europe than the post-war Europe we, in the Western part, had gotten used to.

One of the things we are re-discovering is that our Western post-war Europe, this ‘American Europe’, in essence, might not have been much more than a flush of escapism. An escape from politics and history for traumatised Europe into a more apolitical and more comfortable sphere of policy, technocracy and Anglo-Saxon management of market forces. But it also might have been, like every escape is in the end, a temporary fix; a temporary fix of geopolitics and historic American self-confidence. If this is only partly true, it implies that the ‘American Europe’ might never have replaced the older, European, Europe. Do we realize this? Do we know where we are now? Maybe not.

After the horrors of the second World War, the Italian journalist-writer-provocateur Curzio Malaparte longed to go back to Paris, the European city he loved most. When he finally returned to Paris in the late 1940s, however, Malaparte had to admit to himself that he did not feel at home in Paris anymore. He kept a diary about this unsettling period. In this diary he notes that his favourite French actress, Véra Korène, was still superior in connecting to Europe’s spiritual motherlands, the lost Europe of Racine and Tasso, their romanticism, and the European virtues of forgiveness, melancholy and remorse. But on the same page, Malaparte also notes that Korène was the only one left who understood this: together, Korène and he were the last Europeans.

When Malaparte was unhappy in Paris, Prague – the Czechoslovak capital – was on the eve of the 1948 coup d’état, in which the Czech Communist Party, with Soviet backing, assumed control over the government, marking the onset of four decades of communist rule in the country. In the Communist Prague that emerged from this the philosopher Jan Patocka ran the so-called ‘underground university’, as he was banned from teaching. Here people could take part in an ‘impressive attempt to live in truth’, as Patocka’s student Václav Havel recalled later.

The ‘Socrates of Prague’, as Patocka was called, taught his students that history is not a story with a plot and a happy ending, but a relentless struggle against obfuscation through lies, against the absolutism of rationalization and consumerism, and against all those other human banalities that spell the end for inspiration and openness. He explained that Europe had to fight this struggle time and again; and that if it fails to do so, Europe will wallow in the delusion of pretence once more – pretending that simple solutions will make problems disappear.

When the Berlin Wall came down the former students of Jan Patocka’s underground university probably knew more about the strengths and weaknesses of our open Europe of those days, than Western Europeans did. While the latter looked West – still full of hope – Havel c.s. tried to reinvent the West, rooted in the difficult but essential exercise to practice human rights. And they felt that this was urgent. However, at the moment of the signing of the Treaty of Maastricht Europe seemed to make fun of its own contemporary history, as this post-1990 Europe seemed to defy the very rules and laws of contemporary European history. Which were those rules?

In November 1959 the philosopher Isaiah Berlin gave a long-forgotten lecture to the Third Congress of the Fondation Europénne de la Culture in Vienna. His lecture was entitled ‘European unity and its vicissitudes’. In his speech Isaiah Berlin addressed the issue of the constant ups and downs in Europe’s unity. In a key passage, he explains their dynamic. His words remain very topical today

“European history is a kind of dialectic between craving for public order and for individual liberty … the quest for order is a kind of fear before the elements … an effort to preserve the banisters that human beings need to prevent them from toppling over into an abyss, to connect them with their past and point a path to the future. [But] when institutions become too set and obstruct growth, order becomes oppression … sooner or later it is broken through by an almost physiological desire to live, create, by the need for novelty and change”

This is a gripping description of the rhythm of European history. What Berlin captures here are the two souls of the West, of European culture: enlightenment and romanticism, reason and emotion, calculation and sentiment.

These two souls form the far ends in between which the pendulum of European history swings, from one far end to the other, and back again. This pattern of ups and downs, vicissitudes, this swinging between reason and emotion, light and dark, revolution and ancien régime is a pattern that fits the dominant concepts of twentieth century thought: from the dialectics of Hegel and Marx to the creative destruction of Joseph Schumpeter. A pattern that tells us that any fundamental change must be accompanied by the violent break-up of the existing order. But it also seems to be a scheme too simplistic to catch the European 1990s, this diaphragm of contemporary European history, this lucky in-between from the fall of the Berlin Wall to 9/11, during which Europe’s vicissitudes were suppressed in conversations and negotiations.

Back then, in the 1990s, a broad consensus existed that the order of cooperation and reconciliation was not, and would not become, an oppressing one. On the contrary: the existing order was perceived, and was believed to remain, a freeing order; an order that could sabotage the pendulum of European history: revolution without revolution. Indeed, what Europe tried to do with the Treaty of Maastricht was to explicitly step out of this maddening pendulum of European history – to bolster the institutions of cooperation that it had created already during the American century, so as to make them fit for the next, more European, century.

If we want to protect the open spirit of the 1990s, and not ridicule it, we have to work on it. We have to start writing the history of the 1990s. Too few know about the high hopes of the new Europe that Frederica Mogherini and so many others of her generation remember so vividly. Mogherini will leave Brussels soon. It is up to us to research the Europe that came into being after 1914, 1945 and after 1990 and 2016. It is up to us to assess it as critically as we can, test it, and in so doing, try to cherish that essential European lesson about the social condition: that man is powerless without others, and that where others are powerless, he is too. 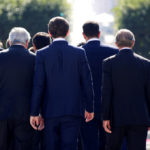 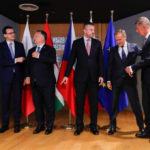 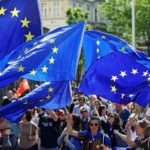