In Holland there’s a shortage of convicts, France holds the record for suicides. 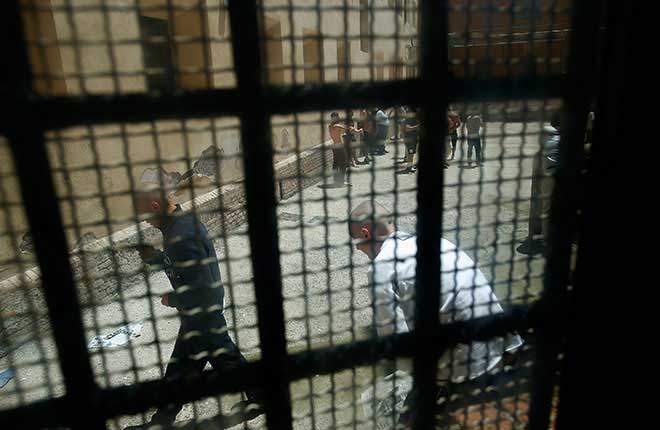 F rance has the fifth highest prison suicide rate in Europe while Norway hosts the “most humane” prisons in the world. And whereas Italian jails are bursting – the EU Court in Strasbourg condemned the country on this account in January 2013 – Sweden has so few inmates that last year it closed four of its prisons.

Germany is involved in a push for alternatives to incarceration, and its inmate population has dropped by 20% in less than ten years. In the Netherlands, where prisoners are in short supply, the government is looking for lodgers to fill their correctional facilities. On the other end of the spectrum, Greece must deal simultaneously with overcrowded prisons and budget cuts: from €136 million in 2009 to €111 million this year.

Considering the extent to which local realities differ from one another, both historically and in terms of political choices, the jigsaw puzzle of European prisons consists of pieces that struggle to find a match. On one hand, there are the critical situations of Greece, Italy, and France, where hundreds of reports and complaints have been filed regarding the treatment of inmates. On the other, nations such as Norway, the Netherlands, Germany and Sweden are regarded as role models, even by countries overseas. Although crime rates have not decreased in any of these countries, they have sought alternative measures to imprisonment in order to relieve overcrowded prisons, lower the cost for the state and invest in the rehabilitation of offenders.

Far from extolling Greece’s past splendor, the last EU report along with one by the Associated Press describe a country on the brink of collapse, even when the issues at stake are inmate treatment and incarceration. In the prisons of Greece, over 12,000 inmates are squeezed into little more than 8,000 places. Sometimes beds are missing, some inmates have to sleep on the floor, and correctional facilities refuse to accept new prisoners.

The number of people behind bars in Greece is the same as in the Netherlands, but Greek maintenance and service funds are less than one-twentieth of those available for Dutch prisons (a €111 million budget against a €2 billion one). Prisoner Giorgos Aslanis spent three months of his life confined in a small, foul-smelling space without sufficient food. The conditions were so poor that the European Court of Human Rights eventually awarded him (just) €8,000 in damages and €2,000 in legal costs and expenses. In matters of overcrowding, Italian jails are close on the heels of their Greek counterparts on the black list of prisons on the Old Continent. The Court of Strasbourg has condemned Italy for housing an average of 145 inmates for each 100 places available. In Italian prisons last year, 99 inmates died. Of these deaths, 47 were and 24 were ascribed to illness. The record for number of prison deaths goes to the Roman prison of Rebibbia. According to the law, a minimum space of 9 square meters must be provided for each prisoner, but in at least 400 reported cases, inmates had only 3 square meters at their disposal.

While the prison population in France has slightly decreased over the last two years, a report released by the Council of Europe in April 2014 found that for every 100,000 French citizens, 117 were incarcerated. And there were 100 cases of prison suicide during the previous year. Only Luxembourg, Finland, Montenegro and Slovenia are doing worse than France, where the incarceration rate has increased by 26% since 2003 and 17.2% of prisoners are immigrants. And yet Europe also boasts the ‘fivestar’ Halden prison in Norway. The high-security correctional facility has unbarred windows and every ten cells share a kitchen and a living room. Halden is now ‘overcrowded’ and will transfer some of its convicts to Dutch facilities, where at present the number of guards surpasses that of inmates. Having announced the plan to close eight correctional facilities by 2018, the Netherlands agreed to host the inmates from Norway and to lease some of its empty prison cells to Belgium. The strategy adopted by the Dutch government in recent years and matched by Germany government has been to levy sanctions, probation or other alternative measures to prison, especially for non-violent offenses, in conjunction with much shorter trials in cases where detention is unavoidable.

German prison law explicitly refers to the rehabilitation of prisoners and states that the only goal of incarceration is to enable prisoners to lead a life “free of crime” upon release. Convicts retain the right to vote unless they have been sentenced for terrorism or subversion. In an editorial published last November, The New York Times identified precisely the Dutch and German examples as role models: in these countries, most prisoners spend a maximum of one year in jail, while the United States has to manage onethird of the world’s prison population. Sweden is yet another country which relies heavily on the rehabilitation of offenders and the prevention of recidivism.

Between 2011 and 2012, its prison population dropped by 6% and currently consists of 4,500 inmates. Aiming to reduce the financial and social burden of incarceration, the Swedish Government closed four prisons in 2013 and has been resorting to conditional release as an alternative to prison, especially for minor crimes.