Many associate to Finland the names of Jyrki Katainen and Olli Rehn, austerity’s supporters, but Finland is among the countries that expressed more Europeanism in the elections for the European Parliament in May 2014, resizing the Eurosceptics, who - with respect to the general election held three years ago - have lost 6 per cent, dropping to 13. 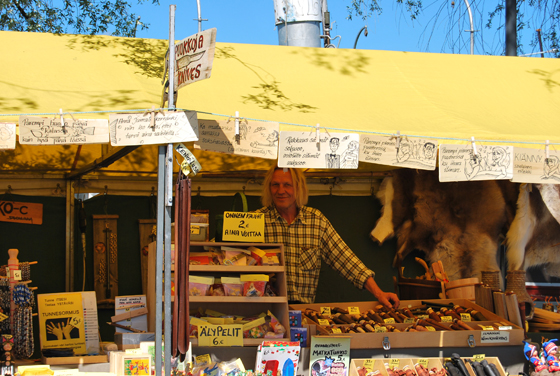 Many associate to Finland the names of Jyrki Katainen and Olli Rehn, austerity’s supporters, but Finland is among the countries that expressed more Europeanism in the elections for the European Parliament in May 2014, resizing the Eurosceptics, who – with respect to the general election held three years ago – have lost 6 per cent, dropping to 13.

It was not a coincidence if on June 23rd, just a month after the vote, the then Prime Minister Jyrki Katainen has been replaced with Alexander Stubb, who as Foreign Minister always praised the benefits of belonging to the EU and of deepening contacts with the southern European Union’s states. For the National Coalition Party (Kansallinen Kokoomus, pro-European center-right) voters have chosen Alexander Stubb (which later, becoming Prime Minister, has given way to Petri Sarvamaa) Sirpa Pietikäinen and Henna Virkkunen, while also Olli Rehn, Paavo Väyrynen and Anneli Jäätteenmäki (for the Centre Party) and Lisa Jaakonsaari and Miapetra Kumpula-Natri (for the Social Democrats) have been elected.

The National Coalition Party has changed its conservative economic line, becoming in recent years a liberal centrist party. Jyrki Katainen had already given to the party a political stance in favor of civil rights and to multicultural society, Alexander Stubb is now strengthening even more its pro-European identity and 22 per cent of votes in the European elections has been obtained by supporting exactly this line.

European issues are more problematic for the Centre’s Party (Suomen Keskusta, one of the major parties with 20 per cent) headed by Juha Sipilä, the political group has a history of opposition to right-wing movements between the two World Wars, of protecting relations with the then Soviet Union in the decades of the presidency of Urho Kekkonen in Finland and promoting ecology and decentralization, but the EU has often deeply divided the party, although it was the Centre that pushed Finland into EU in 1995: Paavo Väyrynen, who has a lot of support in rural areas, represents a critical current towards EU dirigism.

The True Finns Party (“Perussuomalaiset”, a eurosceptic group) represented at the European Parliament by Jussi Halla-aho and Sampo Terho, has lost ground compared to the general election: headed by Timo Soini, the Perussuomalaiset, defending the welfare state, has drawn support from a Left in crisis (after the entry of pro-market trends in the Nordic social democracies over the past two decades).

The group of the True Finns shows characteristics which are common to right-wing forces: a critique stance on costs resulting from immigration and distrust for the European Union, but its roots lie in the agrarian populist movements of the Seventies and progressivity of taxes and public investment still remain among its main flagships, so many commentators see in this political phenomenon a longing for the old finnish Social Democracy and the Eurosceptics, isolated in domestic policy, still state a preference for Social Democrats rather than the National Coalition Party, pro-market and most of all pro-European.

Unlike groups such as Sverigedemokraterna and Danish People’s Party in neighboring countries, the True Finns Party can hardly be classified as a right-wing group, and its crisis can also be connected to the ability of the Centre to promote euro-critical representatives as Paavo Väyrynen, allowing international openness and domestic needs to coexist. Among less large parties, the Greens represented by Heidi Hautala; Alliance of the Left with Merja Kyllönen; Party of the Swedes (Liberal, representing the Swedish-speaking minority) with Nils Torvalds, are growing.

Many associate to Finland the names of Jyrki Katainen and Olli Rehn, austerity’s supporters, but Finland is among the countries that expressed more Europeanism in the elections for the European Parliament in May 2014, resizing the Eurosceptics, who – with respect to the general election held three years ago – have lost 6 per cent, dropping to 13.

What’s going on in Sri Lanka?

No business as usual for Russia? The international community is divided