The triumph of the American tycoon, Moscow’s preferred candidate, has been a surprise for the Kremlin too. Ready to disrupt the election, Russia instead had to change its plan.

During the last hours before the vote, everyone in the Kremlin remained tight-lipped. So it was left to the government controlled media to launch the last missiles designed to discredit the future president of the United States: when all the polls indicated that this would be Hillary Clinton.

But when it became clear that Trump, the best of all possible candidates for Russia, would be going to the White House, all the media had to back off and celebrate the new president of the United States. The members of the Duma erupted into applause at the news and many politicians made jubilant public statements.

Putin, however, just tweeted his congratulations and gave a brief and diplomatic statement: a statement similar to that of many other world leaders who, until a few hours before, had been supporting Clinton.

After the warm endorsement and compliments for the former least favourite candidate, Putin’s low profile surprised many. It shouldn’t have.

“We have listened to the statements made by the then candidate for the US presidential election campaign, aimed at the restoration of relations between Russia and the United States. We understand and we are aware that this will be a difficult journey, because of a deterioration unfortunately  now affecting relations between the US and Russia”, Putin told Trump and Americans. A rather lukewarm wish to the man who a few months earlier he had called “a man of great talent, the absolute leader of the presidential race”.

Trump’s victory, no doubt, is an achievement for the Kremlin. An event that Russia hoped and pushed for, but which even Putin didn’t seriously believe in. It took him by surprise too. And now the victory cannot be celebrated with too much emphasis, simply because it might remind the Russians that such a thing could never happen in Russia.

Because Trump at the White House, like it or not, is the result of democracy. The same democracy that Russia lacks, as is every day more and more evident. Russia is a country where a billionaire who opposed the establishment – which in Russian would be called the “apparat” – or even expressed an intention to run in politics, would end up in the slammer. Take a look at what happened to Khodorkovsky.

Okay, well, so Trump is fine. But let’s cheer him very quietly.

So, the newspapers and TV had to change plan too. What happened to the allegations of fraud made by Dmitry Kiselyov – the front man of the Russian information war machine – during his Sunday programme on the State channel, Rossyia? “The games of our governors in the 1990s are simple child’s play in comparison with what is going on in the U.S.” he said, suggesting a biased election result and an elected president who would be a lame duck from day one. But he was thinking of Clinton.

And again: “It has been the dirtiest campaign in the history of the United States. It has been so revoltingly foul that there is real disgust at the fact that they still talk of democracy in America”. Will Kiselyov tell us where the democracy is now?

Even RT, the international news channel previously known as Russia Today, used its proven technique of carefully selecting the news stories to be boosted – with no need to manipulate them – and those to ignore, to build its campaign against Clinton. The media coverage of the presidential election was summed up in the slogan “the lesser evil.”, while the live coverage of the election had a symbolic title: “Hilarious for America“.

But since the story has changed, the there is no “lesser evil” anymore, and in America there is nothing “hilarious” left. 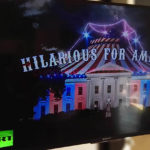 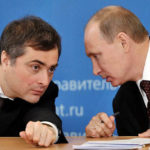