The devil is in the detail: how many know, for example, that Salvini’s Flat Tax discourages employment for women?

“Thirty billion, documented cent by cent by the League’s economists”. Salvini‘s post-electoral campaign on the flat tax has all the right ingredients: a tried and trusted communication technique, a simple proposal and exceptional testimonials. The technique involves speaking directly to the people with all the means at his disposal, whether social of physical, without any annoying intermediaries, seeing as he risks coming unstuck by the first question posed any vaguely discerning journalist. The proposal is, as the name suggests, the simplest of “flat taxes”, first conceived in 1962 by the economist Milton Freedman, the father (at the time) of neo-liberalism; the title of the essay was “Capitalism and Freedom” and there’s reason to doubt that anyone in Salvini’s entourage has actually read it – although the title could turn out to be useful for the social communication team known as “the beast”. The testimonials are unwitting: Jean Claude Juncker, Pierre Moscovici, Valdis Dombrovkis, meaning the outgoing top management of the European Commission’s economic policies, to which one will surely be adding the newly appointed ones. They do their job, meaning that they note that on paper Italy’s public accounts are out of control and therefore there’s no money to fund the flat tax promised to come into force by 2020. In fact, before it even gets a mention Italy may be called upon to answer for what it did and didn’t do in the 2019 budget. What we talking about is “infringement procedures”, and if formally announced this would be the first time in the European Union and a disaster for Italy.  But that doesn’t mean it would be a disaster for Salvini and his League. In fact, for the time being, it’s a powerful diversion that enables their propaganda machine to keep waving their flat tax flag that billows in the wind of the future, loved and yearned after by all, but opposed by Brussels bureaucrats. If it doesn’t happen, it will be their fault – this is the implicit message in Salvini’s propaganda.

Opposition by the European and Italian economic establishments is both unavoidable and dangerous. Unavoidable because Italy is clearly breaching the letter and the substance of the treaties it has signed, without attempting the political mediations that in the past have granted it a good degree of flexibility, and without building the political conditions required to reform them. But also dangerous, because by focusing the discussion on the economic sustainability of the flat tax one is avoiding the issue of its social sustainability. In other words, the much more poignant question is being left unanswered: who stands to gain from the flat tax? The poor, the rich, everyone? Can a flat tax actually be progressive, as the Five Star Movement is claiming?

The League’s proposal is to extend the mini-flat tax that has already been introduced in 2019 for VAT number holders, and involves a 15% tax rate on family revenue under 50,000 euro. A very extensive cross-section, if one considers that in the 2018 tax returns the taxpayers claiming income above 50,000 euro were little under 1,250,000, 5% of the entire tax paying community. However, the league’s proposal introduces a complication to the apparent simplicity of the new tax: while almost all of our tax system is based on personal income, the new tax will apply to family incomes. We will therefore have a double tax regimen, something totally unforeseen in financial science manuals: a family taxation below 50,000 and an individual one above. This makes comparisons tough, but one can say that, currently, the most considerable number of individual income tax payers hovers between 15and 25 thousand euro a year. Maintaining the current “no tax area” for the lower incomes, clearly for this lot very little changes: they paid no tax before, and they won’t be paying any after.

According to the calculations of two of the main Italian tax experts, Massimo Baldini and Leonzio Rizzo, up to 20,000 euro of family income the savings amount to zero. The advantages start between 25,000 upwards and grow as we approach the 50,000 threshold. Savings are highest for single earner couples, less or almost non-existent for those with double incomes. The tax cut would be the highest for a family with a single income of 40,000 euro: moving from a marginal tax rate of 38% to a ‘flat’ 15% would mean saving in the order of 5,000 euro a year. With similar earnings, a couple where both partners earn around 20,000 euro could end up paying more than before (but it could be suggested that one can opt for the previous tax regimen if preferable). In the crowded tax bracket hovering around 20-25,000 euro, the advantages would be negligible, between 95 euro (for a double income couple) to 739 euro (for a single income family).

Is Salvini’s female electorate aware of the fact that what is being introduced is a system that discourages a second family income, which is often the woman’s? We don’t know, because the matter is not up for debate; but what is certain, as the two economists write based on the figures (in a very instructive book Flat Tax. Equal or unequal parts? published by Mulino, and in an article with simulations of the League’s proposals on lavoce.info), the tax saving would be handed out “haphazardly on one hand, and unfairly on another”.

But is a “fair” flat tax possible?

To answer this question we first have to understand what we mean by “fair”. Speaking of taxes, we all tend to believe that the best system is one that reduces our personal tax burden. But as a system, our Constitution imposes progressivity: which means that those who have more pay a larger part of their income and/or wealth. A first important proviso: the entire system needs to be progressive, not necessarily income tax. In theory, we could have a non-progressive income tax, accompanied by fiercely progressive taxes on capital, and the system overall would be aligned to the Constitution. But this won’t be the case given the political hostility – and practical difficulty, where intangible assets are concerned – of taxing capital. If we restrict ourselves then to income tax, a progressive tax can also be achieved with a flat rate, provided it is very high and envisages rebates for lower incomes. A high flat tax rate would also have the advantage of costing less, in other words it would be viable, because it would mean tax revenue would fall off less and avoid swelling the public debt. But it’s hard to imagine Salvini rallying behind a flat tax rate of say, 35%… and in any case the very wealthy would still be making a healthy profit.

This leads us to the political point. Italian politics’ infatuation with the flat tax, which started with Berlusconi and is now coming to a head with Salvini, is not so much about its being flat, but about being “low”; by ‘flat’ we mean ‘less taxes’. The real figures tells us that, if the flat tax were actually implemented, it wouldn’t be for everyone, but for many; but among these many there would be very few of the lower income brackets who voted for Salvini. Not to mention that the debts produced to cover the chasm opened up by the flat tax (or the expenditure cuts) would also have a redistributive effect, unfavourable to the middle and weaker classes, a right wing populism paradox. Trump in the United States is doing the same thing, on a larger scale. We probably won’t get round to it, owing to the European constraints, but thanks to those same constraints, the false myth of the flat tax will live on, unchanged and unverified. 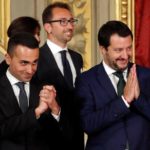 Who will pull the plug? 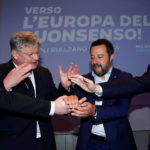