In bed with the Devil

The Ukrainian crisis should have been avoided. Now everyone is involved, but no one is making a difference. 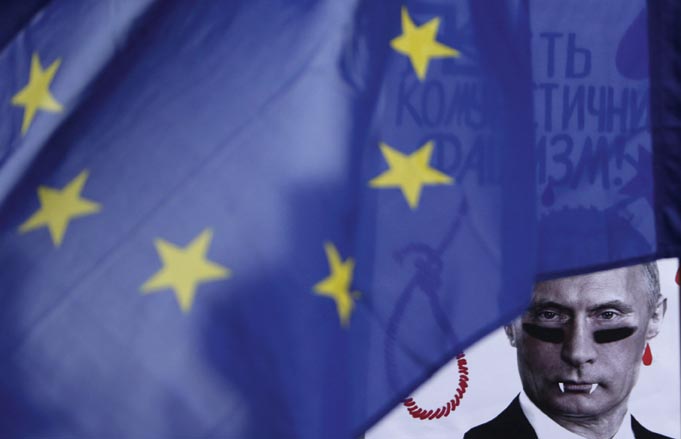 If we review the events that led up to and characterise the Euro-Russian-Ukrainian crisis of recent weeks, we can’t help looking at matters from Tsar Vladimir Putin’s point view. His, not the West’s. Let’s try to see what he sees.

Europe, driven by the Polish, Baltic and Scandinavian leaders, almost dragged Ukraine into the EU sphere of influence – had Ukraine signed an Association Agreement in late November 2013, as scheduled – without even consulting their cumbersome Russian neighbour, as any corporate Board of Directors would do if a shareholder were bent on forcing their hand in a difficult move. In these circumstances, one either covers one’s bases in advance, by negotiating the majority shareholder’s consent, or else stages a blitz and accepts all the devastating consequences if the surprise attack fails.

The Ukrainian crisis erupted into a scenario resembling the latter option, made worse by a series of senseless provocations. With his term almost over, NATO Secretary General Anders Fogh Rasmussen of Denmark, in an irresponsible outburst announced NATO’s intention of strengthening military cooperation with Ukraine, in keeping with what had been done with Russia. Putin responded by expressing the preference that: “NATO come to see us in Sevastopol, rather than us going to visit them.”

The US Secretary of State John Kerry and EU Foreign Minister Catherine Ashton were then filmed offering coffee to protesters in Kiev’s Maidan Square, without realising the political and not merely humanitarian implications of the gesture. The new Ukrainian administration, having taken provisional control after Viktor Yanukovych’s precipitous flight, with the sole purpose of leading the country to elections in May, considered it a priority to ban the use of the Russian language in the eastern part of the country, where the majority of the population has historically been Russian.

Then there are the economic and financial aspects, which are nothing short of paradoxical. If a friend owes you €10,000 and then chooses a new circle of friends, dumping you in the process, wouldn’t you ask for your money back, especially if the loan had been overdue for some time? That’s what Putin did when the Yanukovych government, with which he had been on friendly terms, decided to sign the Association Agreement with the EU in exchange for €200 million. Putin asked for immediate payment of the €12 billion he calculated that Russia was owed for cancellation of the ‘discount’ on Ukraine’s energy bill as well as for the country’s outstanding debts. The move induced Yanukovych to make an – obligatory and predictable – about-face, sending Ukrainian youth to their spontaneous and unplanned street protests, which were later infiltrated by ultra-nationalist and fascist groups.

The provocations were instrumental in triggering a muscular reaction from Tsar Putin (whose autocracy we do consider heavy handed). He ordered his soldiers stationed at Sevastopol to leave their bases and circulate around the Crimean Peninsula, priming a popular uprising in favour of Mother Russia. The successful operation was subsequently ratified by a referendum that saw an ample turnout and a landslide vote in favour of a return to Moscow. It must be emphasised that the responsibility for these events lies as well with the Ukrainian ruling class – on both sides – which has proven utterly incapable of achieving the historical objective of establishing truly democratic institutions in the country. While Putin was attempting to finalise the annexation – an extreme reaction to the West’s encirclement of the old, now disempowered, superpower – the international community reacted with an array of initiatives that, along with statements of principle (tentatively voiced by American, British and French leaders), ranged from sanctions against a few dozen lesser Russian and Ukrainian political players; to the threat of speeding up the Ukrainian accession process into the EU and even NATO, further showing little awareness of the grave risks involved when enemy armies and weapons are in too-close proximity and their arms are ‘locked and loaded’.

The business community is attempting to argue for reason, reminding all the EU countries that they depend on Russia’s gas and that Russian energy is a main supplier of the European market and cannot be replaced in the short term. Then there’s the regional danger in underestimating the political, human and psychological factors in these crises, particularly when the landscape is strewn with young idealists, nervous troops and roving paramilitary bands. How else can one explain why the very countries that are most dependent on Russian energy (Finland and the Baltic states – 100%; Poland – 80%) are the staunchest defenders of Ukrainian sanctity, while a country like Italy, which imports only 28% of its gas from Russia – leads the negotiations- with-Putin front, viewing it as the only concrete and lasting way out of a crisis that otherwise risks blighting the lives of an entire generation of Europeans.

The echoes of upheavals in countries inspired by the Crimean wave, in regions with a high Russian population – such as Transnistria, Ossetia and Abkhazia – further confirm that the only sensible thing to do is to parley and negotiate.